No thanks
Continue
Whoops!
Your free trial of Curious+ has expired
Person, Place, or Thing
Our encyclopedia of the odd and awe-inspiring.
Previous Next
February 13, 2022
1 CQ
Thing: The bombing of Dresden 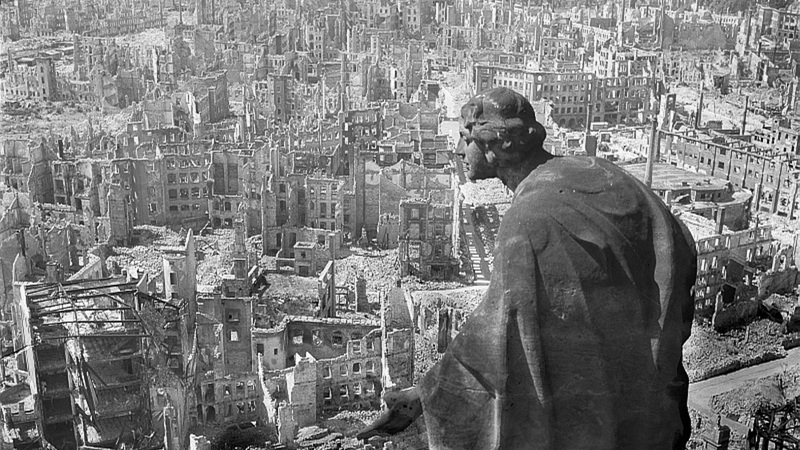 Here’s a little-talked-about World War II controversy. The allied bombings of Hiroshima and Nagasaki, which employed atom bombs for the first time, are still a part of popular public consciousness, as is the Blitz of 1940, in which Nazi forces bombed London. Yet one devestating bombing campaign goes largely undiscussed: the allied bombing of Dresden, Germany. This bombing campaign, which began on this day in 1945, killed around 25,000 people, almost of all of them civilians. Some historians believe that the campaign contributed to Germany’s surrender, three months later. Others contend that the bombings were ultimately pointless, since the end of the war was already near.
At one time, Dresden was known as “Florence on the Elbe.” The comparison to Florence, Italy, was not unfounded, as Dresden was full of Baroque architecture, an elaborate style that originated in 16th-Century Italy. Dresden also boasted museums full of artistic treasures, hence it’s other nickname, “the jewel box.” However, the city was also a major center for German industry and travel. Many trains ran through Dresden, while its factories produced military vehicles and ammunition for the Nazis. In February 1945, the Nazis were defending against advancing Soviet Union troops around 155 miles away from Dresden. Allies thus believed that an attack on the city would disrupt the Germans’ ability to stand against the Soviets, their ability to produce military equipment, and their ability to get troops and other supplies across the country. There were other, more controversial reasons for the bombing, too. For one, Dresden had become a popular place for German refugees to flee to, throughout the war. Bombing the city would leave future refugees with nowhere to go. British Prime Minister Winston Churchill also believed that an attack on such a populated area would cause chaos, overwhelming German hospitals and forcing German authorities to scramble to cope with the damage.
At around 5:20 p.m. on February 13, 1945, a group of planes from Britain’s Royal Air Force began their flight to Dresden. They flew dropped magnesium parachute flares over the city, lighting up the area for the bombers who followed, so they could see their targets clearly. Bombing began around 10:13 p.m. Over 880 tons of bombs were dropped, with more following three hours later. Many of the bombs were incendiaries specifically meant to spread fire through the city’s many wooden buildings. The plan worked. Due to windy conditions, an enormous firestorm broke out in the wake of the bombing. One survivor, named Margaret Freyer, described the horrors of the firestorm in the 1987 book Eyewitness to History, “Insane fear grips me and from then on I repeat one simple sentence to myself continuously: "I don't want to burn to death". I do not know how many people I fell over. I know only one thing: that I must not burn.” Another survivor of the Dresden bombings was famed American writer Kurt Vonnegut, who was being held in the city as an American prisoner of war. The death and destruction he witnessed in Dresden contributed to his strong pacifism, which informed his works.
The bombings lasted for three days, and their official death count was disputed for years. Germany initially announced that at least 200,000 civilians had died. In the 1960s, English author David Irving claimed that between 150,000 and 200,000 people had been killed, but many were skeptical, since Irving was a well-known Holocaust-denier. In 2005, the city of Dresden’s created a historical commission to establish an official, accurate death count, to prevent Holocaust-deniers and other idealogues from making inaccurate claims. In 2010, the commission stated that the estimated number of casualties was between 22,700 and 25,000. Although Dresden didn’t represent the deadliest allied bombing of a civilian population center in Germany during World War II (that title goes to the bombing of Hamburg, which killed around 30,000 people) it remains one of the most contentious to this day. Regardless, World War II did draw to a close seven months after the attack. No doubt it extracted a heavy toll.
[Image description: A black-and-white photo of the ruins of Dresden, in 1945. The statue of a woman with her hand extended (Güte by August Schreitmüller) overlooks the scene.] Credit & copyright: Richard Peter, August Schreitmüller, entstanden 1908/1910 (Bildhauer), Deutsche Fotothek, Wikimedia Commons, image cropped for size, this image is hereby distributed under the same license linked here.