No thanks
Continue
Whoops!
Your free trial of Curious+ has expired
Person, Place, or Thing
Our encyclopedia of the odd and awe-inspiring.
Previous Next
December 5, 2021
1 CQ
Person: Carrie Nation 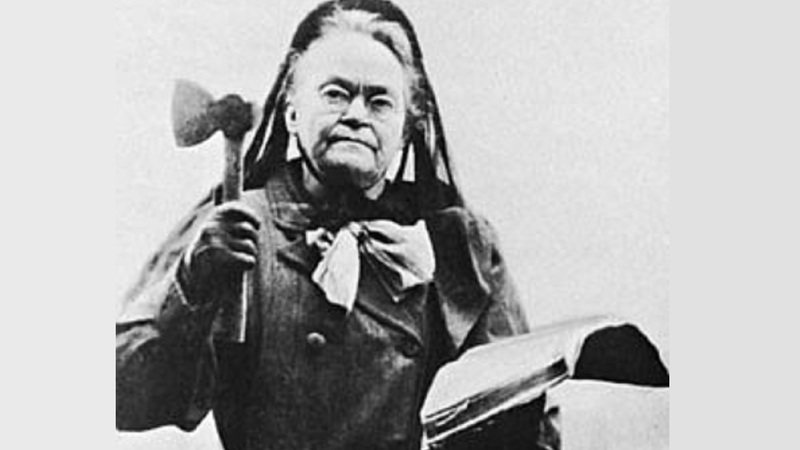 Passionate political crusader or domestic terrorist? It depends who you ask when it comes to Carrie Nation, a woman best remembered for smashing up 19th-Century American bars with a hatchet due to her hatred of drinking. She’d surely be none too happy that Prohibition was overturned on this day in 1933, with the ratification of the 21st Amendment. To be fair, though, Nation had some compelling personal reasons for seeing alcohol as a social ill.
Born Caroline Amelia Moore in 1846, Nation’s life was difficult from the start. She suffered from poor health as a child, her mother was mentally ill, and the Civil War uprooted her family’s life several times. In 1865, a 19-year-old Nation met and fell in love with Charles Gloyd. Gloyd was a schoolteacher, physician, and former Union soldier. Unfortunately, he was also a severe alcoholic. His drinking was such a problem that Nation’s own parents objected to the relationship. However, this only delayed Nation’ marriage to Gloyd until 1867. Nation soon found that he spent more time at the local Masonic Lodge, which served alcohol, than he did at home. When Nation became pregnant, in 1868, she moved back in with her parents. In her autobiography, Nation later wrote, “I knew time was near at hand when I would be helpless, with a drunken husband, and no means of support.”
During Nation’s lifetime, American drinking culture was different than it is today. Bars, lodges, and other places that served alcohol catered almost exclusively to men. Many women thus found themselves in situations similar to Nation’s—living with drunk men who were sometimes absent and sometimes violent due to their drinking. Married women were not expected to work outside the home, so women in Nation’s situation had few ways to support themselves. Women couldn’t yet vote, so they had no political power with which to challenge alcohol’s legality. Instead, womens’ frustration with mens’ drinking helped form the temperance movement—a social and religious movement that promoted abstinence from alcohol. After her husband died in 1869 from complications of alcoholism, Nation joined the movement and soon became its most prominent leader.
By 1889, Nation’s life had taken a turn for the better. She had married again, this time to an attorney and minister named David Nation. In Medicine Lodge, Kansas, she started a local branch of the Woman’s Christian Temperance Union. Along with other members of the branch, she would stand outside Kansas bars, preaching, yelling, and even singing to the patrons inside. In 1900, however, Nation decided to change her methods, after receiving what she described as a “call from God.”
On June 7, 1900, Nation gathered large rocks and went to Dobson’s Saloon, in Kiowa. She walked into the bar and began smashing their bottles of liquor, saying, “Men, I have come to save you from a drunkard’s fate.” She overturned tables and smashed windows. Once she was out of rocks, she left, gathered more, and attacked two other Kiowa saloons. At one point, she even used billiard balls to break windows and mirrors. Not long after, a tornado hit the Kiowa area, convincing Nation that God approved of what she had done. Nation now felt that she had an entirely new way to combat drunkenness.
She also realized that a woman smashing up bars was bound to grab public attention, and she leaned into the spectacle, seeing it as a way to convert more people to the temperance movement. Nation began carrying a hatchet, using it to smash bars throughout the state of Kansas and, later, Oklahoma. The hatchet became her most famous symbol, so much so that her bar-smashing episodes became known as “hatchetations.” She even sold hatchet pins to her supporters, who steadily grew in number thanks to the already-popular religious revival of the 19th Century.
Of course, not everyone was a fan. Mainstream newspapers often published unflattering cartoons of Nation. Bars began hanging signs with the slogan: “All nations welcome except Carrie.” By the time Nation stopped smashing bars, in 1901, she had been arrested at least 30 times for destruction of private property. Yet her influence pushed the temperance movement, and the debate over alcohol’s legality, into the national spotlight. Nation passed away in 1911, just nine years before alcohol was banned in the United States. It’s a bit of a shame that she never got to see her ultimate goal met. Then again, Nation likely would have gone a-smashing if she’d seen it overturned, in 1933!
[Image description: A black-and-white photo of Carrie Nation holding her bible and famous hatchet.] Credit & copyright: Public Domain


More about this Curio:
History: "Activist Carry Nation Used a Hatchet to Smash Booze Bottles Before Prohibition."
The Lily: "This Woman Campaigned for Prohibition by Smashing Up Bars. Male Writers Have Been Villainizing Her Since."
Vinepair: "The Story of Carrie Nation: The Infamous Ax-Wielding Prohibitionist."