No thanks
Continue
Whoops!
Your free trial of Curious+ has expired
Person, Place, or Thing
Our encyclopedia of the odd and awe-inspiring.
Previous Next
July 9, 2021
1 CQ
FLASHBACK | Place: Playa del Amor
It's Flashback Friday! Enjoy summer with this curio themed to the season! Now that summer's here, who isn't dreaming of a seaside vacation? It's certainly easy to see why this dream destination is called the "lovers beach"! Nestled in an old bomb crater, "Playa del Amor'' (love beach) in Islas Marietas, Mexico is a natural wonder. The tiny, oval-shaped beach stands out in the middle of an otherwise unbroken green landscape. Pacific waters come lapping in through an underground tunnel, which is used to access the beach and which leads out to the ocean. But it isn't just lovers who are interested in seeing the Hidden Beach—instagrammers also want to capture its one-of-a-kind beauty. In recent years, more travelers have been flocking to see the small beach than its geography would allow. In fact, its popularity became enough of a problem that the Mexican government was forced to step in.
The Marieta Islands (Islas Marietas) are a group of uninhabited islands near the coast of Nayarit, Mexico. The fact that no one has ever lived on the islands made them an ideal site for military testing, beginning in the early 1900s. By the 1960s, the Mexican military's bomb and artillery tests had wiped out much of the islands' wildlife, and caused the formation of many caves and craters. Around this time, famed French scientist and conservationist Jacques Cousteau began to study the islands, and brought attention to the harm being caused to their wildlife. He began petitioning the Mexican government to step in and protect the islands, noting that certain species of birds, plants and insects could go extinct, if military testing continued. Eventually, he led a protest, which sparked an international outcry in the scientific community. The movement was joined by many Mexican citizens who feared that military testing was not only dangerous to the islands' wildlife, but potentially to people living on nearby coasts.
Although military testing on the islands became less frequent, beginning in the 1970s, people continued to petition the Mexican government for nearly 40 years, urging official protections for the islands. Finally, in 2005, an announcement was made that the islands would become a national park. This designation not only banned military testing, but also hunting and fishing on or around the islands, and any other activity that could harm local wildlife. Today, simple recreational activities, like swimming and kayaking, are the only ones allowed on the islands. The entire national park has also been designated as a UNESCO MAB Biosphere Reserve, a place of great importance to the scientific community and those interested in sustainable development.
As it turned out however, banning military testing and hunting wasn't enough to keep the islands—and Playa del Amor—safe. Amidst the rise of social media, pictures of the beautiful beach created buzz online. Soon, tourists from every corner of the globe were converging on the beautiful spot in hopes of snapping the perfect instagram photo. So much increased foot traffic meant overcrowding, pollution, and potential damage to the environment, which had only recently bounced back. The Mexican government was forced to step in and limit the number of people allowed into the beach at one time. Visitors can bring no more than 16 guests, and must get special bracelets from one of several nearby tour companies in order to visit. Reservations are often made months in advance. Of course, getting to the beach is no walk in the park, reservation or no. Playa del Amor can only be accessed during low tide. Visitors must float, kayak or paddle-board from the nearby Pacific ocean through a 50-foot-long rock tunnel to reach it. The chance to sunbathe, swim (and, yes, get a once-in-a-lifetime selfie) is surely worth it, though!
[Image description: Seen from above, a small, ovular beach, in a crater, stands out against a surrounding landscape of green plants.] Credit and copyright: Chaz Decker
Below: two more views of the beach, another arial shot and a view from eye level. 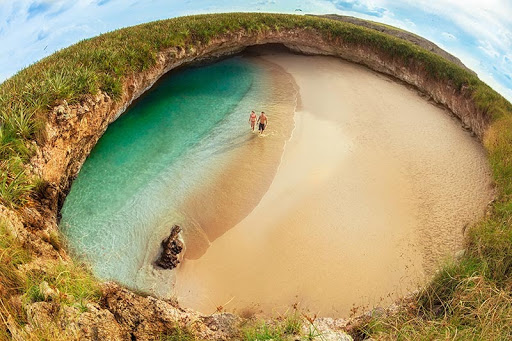 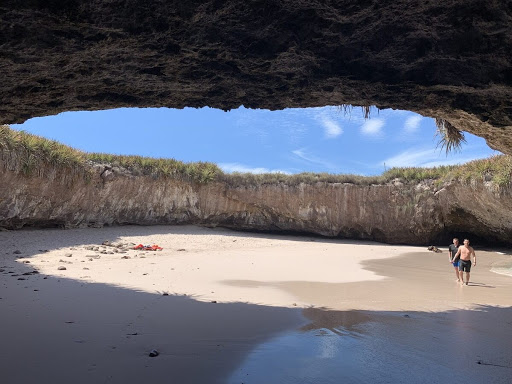