No thanks
Continue
Whoops!
Your free trial of Curious+ has expired
Daily Curio
An amusing daily fact from the Curious team.
Previous Next
Daily Curio #972 March 21, 2016
1 CQ
The woman who painted FDR's last breath 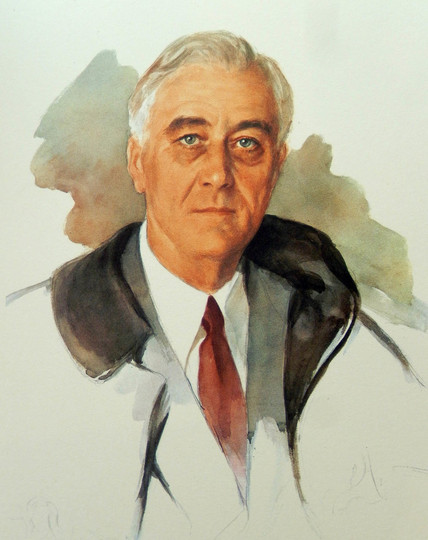 On April 12, 1945, the portrait artist Elizabeth Shoumatoff met with then-US-president Franklin Delano Roosevelt for the third time. She had already made two small portraits of FDR as studies for her final painting. The artist initially refused to paint the President's portrait, out of nervousness. But her friend (and former Roosevelt mistress) Lucy Rutherfurd pressured her into it. She had already painted portraits for the wealthiest families in America, including the Fords, Mellons, and Firestones. Still, this assignment was especially tricky given her subject's seriously declining health. By the time Roosevelt began his fourth term in January of 1945, he was suffering from high blood pressure, atherosclerosis, coronary artery disease, and congestive heart failure. This in addition to battling polio his entire life. But FDR may have been suffering from cancer as well. Conspiracy theorists have noted that an obvious skin lesion above his left eyebrow suddenly disappears from photos around 1940. And in March of 1945, FDR gave several speeches that veered bizarrely on and off the prepared text he was reading. Some scientists have concluded he was having trouble seeing the left side of the pages of his speech. All of this could suggest FDR had a melanoma removed from his left eyebrow, which had already metasticized to his brain. Of course Shoumatoff knew nothing of this. She had finished the President's face and was adding details to his clothing when, right before lunch, the President complained of a pain in his head, then slumped forward. FDR was dead instantly from a cerebral hemorrhage--at least according to the autopsy. Shoumatoff, understandably horrified, did not feel right about finishing her painting. Instead, she donated it to a museum in the exact state it was when FDR died. You can see it below. Without any marks above the left eye.
The Unfinished Portrait of Franklin Delano Roosevelt by Elizabeth Shoumatoff.

Learn more about this Curio:
The Digital Library of Georgia: "FDR’s Last Days in Georgia"
Dead Presidents: "April 12, 1945: FDR and the Unfinished Portrait"
The New York Times: "For F.D.R. Sleuths, New Focus on an Odd Spot"