No thanks
Continue
Whoops!
Your free trial of Curious+ has expired
Daily Curio
An amusing daily fact from the Curious team.
Previous Next
Daily Curio #963 March 12, 2016
1 CQ
May ICU Home Tonight?
You think the dating scene is bad today? Dealing with online profiles, mobile "speed dating" apps, or even "biodata" sheets is nothing compared to the Victorian Age. In that era, women were never allowed to go out unchaperoned. So men carried personalized calling cards, or "acquaintance" or "escort" cards. Single lads—and rarely ladies—would hand them to members of the opposite sex at parties or even on the street. Most of the cards were called I.C.U. Home cards, as in “May I walk you home tonight?” Sort of a Victorian version of the modern euphemism "Netflix and chill." Ahem. Ladies got in on the act also. They would respond with calling cards of their own, usually called "You may see me home tonight" cards. Victorian-age parents panicked that their children were making these signals behind their back. But it's just more proof that the more things change, the more they're still the same. Although I wonder what those 19th-century parents would think about Tinder! 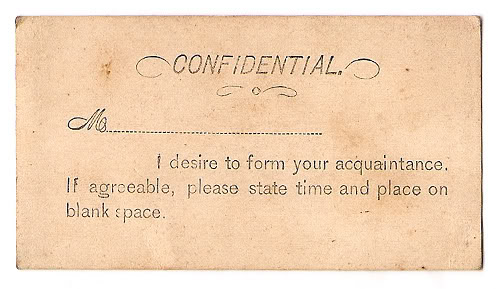 Courtesy of The Steam Wench's Salon.