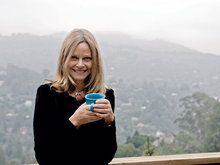 Joyce Maynard first came to national attention with the publication of her New York Times cover story, “An Eighteen Year Old Looks Back on Life”, in 1973, when she was a freshman at Yale.

For the last ten years, Maynard has run her week-long WRITE BY THE LAKE writing workshop on the shores of Lake Atitlan in Guatemala, where she has a home. She also teaches at the Maine Media Workshop for several weeks each summer, and holds one-day intensive workshops at her home in California.

Maynard is the author of fifteen books, including the novel To Die For and the best-selling memoir, At Home in the World—translated into twelve languages. Her novel, Labor Day, is currently being developed as a motion picture to be adapted and directed by Jason Reitman. Her latest novel, After Her, was released in August of 2013.

All Lessons by Joyce Maynard