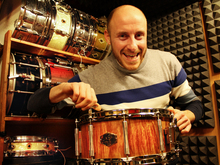 Davide De Angeli began studying percussion instruments at the age of 12 at the Musical Institute of the Republic of San Marino. In addition to drums he started studying timpani, marimba and vibes, but later he decided to focus mainly on drums, so he left the studies of other instruments.

At the age of 18 he started working in a musical instruments shop and backline rent based in the Republic of San Marino. Since that moment he has been touring over the country working as roadie/drum tech with world renowned artists and he has been managing the percussion department of the shop.

He worked with Queen, Deep Purple, James Brown, Dee Dee Bridgewater, Sting, Keith Emerson Band, Incognito, Eric Clapton, BB King, Sergio Mendez, Gilberto Gil, Roy Argroove, Ian Anderson, Pino Daniele, Zucchero, Manà, Procol Harum, Linea 77, Fiorella Mannoia and other important names of musical panorama.
Touring and working with different artists has enriched his knowledge about drums and gear, as he had the chance to closely watch and test set-ups of many drummers in different stages, from theaters to stadiums, from clubs to gigs on the street.
He played with different rock and metal bands over the years and in 2008 he joined the punk/rock band Not4Wedding with which he toured around the country, opening live shows for bands such as Deep Purple, Good Charlotte, Frankie Hi-NRG, Meganoidi, Skiantos.
He loves to go back to the roots of everything, so he started to look back at the origins of drums and drum kits. He started to buy vintage drums and studying how they were built: he literally felt in love with them.
He discovered a completely new world about shells construction: the woods, the edges, the hoops, so he finally had a 360° view of the drum.
He collaborate with brands such as UFIP cymbals and Drum Art (snares and sticks) for which he designed a drumstick model called 5AB Extreme. These drumsticks have been chosen by several top italian players thanks to their feature.

Other Lessons by Your Drum Sound