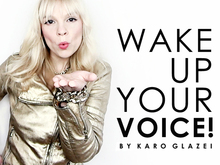 Karo Glazer is one of the most original jazz artists of recent years. She consistently shapes her own, unique, musical language which is peculiar to her only. She is a vocal artist, composer, arranger and producer all at the same time. After the premiere of her debut album NORMAL in 2009, her unusual talent was noticed not only in Poland, but also in Europe as a result of which she went on a concert tour of Europe appearing on the greatest European jazz scenes and promoting her album. But the real success was her last album called CROSSINGS PROJECT published by EMI Music in 2013. It is a super production composed, arranged and produced by Karo and recorded in such an outstanding line up feat.: Mike Stern, John Taylor, Lars Danielsson, Klaus Doldinger, Joo Kraus and many others great musicians from all over the world.

She is a vocal artist paying close attention to improvisation and exploration of new areas of interest. She has turned her voice into an instrument of outstanding capabilities supported by a 4-octave range of voice and extraordinary musical imagination.

Currently, she also works as a professional vocal coach and runs a prestigious cycle of vocal workshops under the auspices of the company AKG “Wake Up Your Voice”.

Other Lessons by Wake Up Your Voice