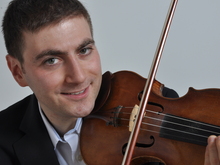 Born in Cleveland, Ohio, USA, violinist Daniel Broniatowski has performed in many parts of the United States and Europe. He has had the privilege of studying with some of the world’s most eminent teachers schooled in the Russian virtuosic technique of violin playing. Dr. Broniatowski holds a Bachelor of Music Degree in violin performance from the New England Conservatory in Boston and a Masters of Music degree from the Royal College of Music in London. He has also completed a Doctorate of Musical Arts degree at Boston University where he was accepted on full scholarship.

As a solo and orchestral violinist, Dr. Broniatowski has performed in many venues such as Carnegie Hall, New England Conservatory of Music’s Jordan Hall, Boston’s Symphony Hall, and Cleveland’s Severance Hall. Mr. Broniatowski has a particular interest in performing Jewish inspired Classical music as is represented in his repertoire.

Mr. Broniatowski has a particular interest in performing Jewish inspired Classical music, as is represented in his repertoire. Of special personal significance, Daniel Broniatowski has performed with the Philharmonia Czestochowa in Poland, playing Bloch’s “Baal Shem Suite” with Michal Nesterowicz conducting. This was in collaboration with the World Society of Czestochowa Jews and their Descendants.

Dr. Broniatowski and his quartet have recorded local composer Erik Lindgren’s String Quartet Number 2 on the album
“Progressive Music for String Quartet”. They have also been featured twice on WBZ’s The Jordan Rich Show.

As a teacher, Dr. Broniatowski’s approach is to fuse the repertoire of the Suzuki Method with a distinctively Franco-Russian technique for a rich and beautiful tone.

Other Lessons by Maestro Musicians