No thanks
Continue
Whoops!
Your free trial of Curious+ has expired
Daily Curio
An amusing daily fact from the Curious team.
Previous Next
Daily Curio #2302 September 13, 2021
1 CQ
Smuggled winged wonders 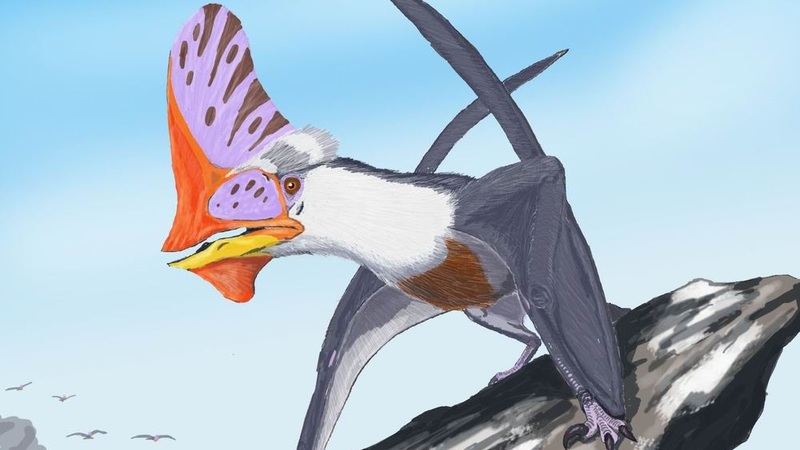 Turns out, some pterosaurs didn’t care for the wild blue yonder. On August 25, paleontologists from the University of São Paolo published a paper in the journal PLOS ONE regarding a fossil of the pterosaur known as Tupandactylus navigans. Remarkably, the fossil was recovered in a police raid eight years ago along with 3,000 others, all of which had all been headed for the illegal fossil trade. Today, it is the most complete example of this particular pterosaur ever discovered.
Unfortunately, when it was found by police, the limestone containing the ancient creature’s remains had been cut into six blocks by smugglers, for easy transport. This didn’t deter steadfast scientists, including Victor Beccari, one of the authors of the recently-published paper, who used a CT scanner to look inside the blocks. What he saw changed the paleontological community’s understanding of not only T. navigans, but of all pterosaurs in the Tapejaridae family. Based on previous, less complete fossils found in China, they were thought to have had short, well supported necks to hold up their large, crested heads during flight. However, the scans revealed that the pterosaurs actually had long necks that made up over half the total length of the spine. This would have been unsuitable for long-distance flights, but they weren’t completely grounded. They still had adaptations in the nasal cavity for flight, and likely flew to escape predators, but their long hind legs and short arms meant they were probably more comfortable walking.
These features led Beccari to compare the pterosaur, which lived 140 to 100 million years ago during the Early Cretaceous period, to modern day peacocks. “With its huge, awkward crest and long neck…sort of like [flashy] peacock tails…they would have made him an attractive mate, but an easy target for predators and a poor flyer,” Beccari said. “Like the peacock, it probably spent its time eating fruit off the ground or using its long neck to grab food from higher bushes.” It’s nice to know that, even if they weren’t aerial acrobats, these pterosaurs were still pretty fly.
[Image description: An artist’s depiction of Tupandactylus navigans crouched on a rock against a blue sky.] Credit & copyright: Dmitry Bogdanov, image cropped for size.

More about this Curio:
Good News Network: "Near-Complete Pterosaur Skeleton Obtained in Police Raid Reveals Stunning Details About the Species."
Plos One: "Osteology of an Exceptionally Well-Preserved Tapejarid Skeleton from Brazil: Revealing the Anatomy of a Curious Pterodactyloid Clade."
Science News: "This Big-Headed Pterosaur May Have Preferred Walking Over Flying."