No thanks
Continue
Whoops!
Your free trial of Curious+ has expired
Daily Curio
An amusing daily fact from the Curious team.
Previous Next
Daily Curio #2299 September 7, 2021
1 CQ
Uplifting tuna tally 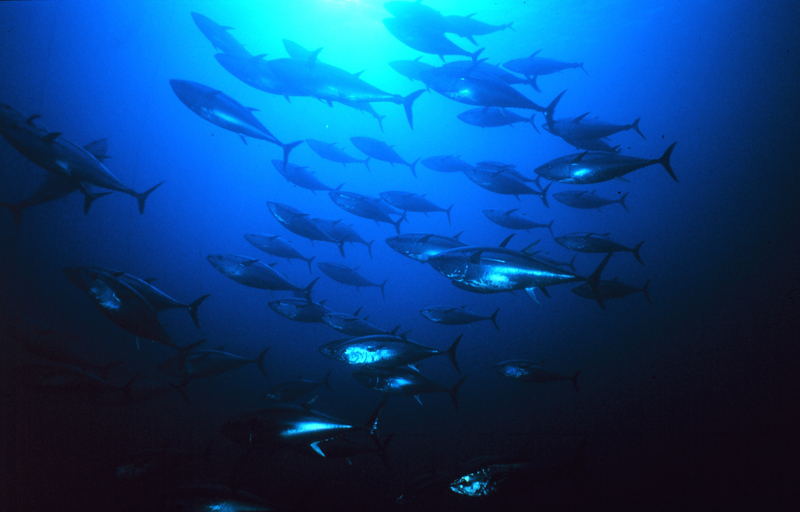 Things are going swimmingly for these lucky tuna. On September 4, the International Union for Conservation of Nature (IUCN) released their updated Red List of Threatened Species which showed significant improvements in the population of some of the most commonly fished tuna species. The four affected species are: the Atlantic bluefin (Thunnus thynnus), moved from Endangered to Least Concern; the Southern bluefin tuna (Thunnus maccoyii), moved from Critically Endangered to Endangered; the albacore (Thunnus maccoyii) and yellowfin tuna (Thunnus albacares), moved from Near Threatened to Least Concern. For reference, the Red List categorizes every species of interest as Least Concern, Near Threatened, Vulnerable, Endangered, Critically Endangered, Extinct in the Wild and Extinct. If their population has not been adequately studied or not enough information is available, they are labeled Not Evaluated or Data Deficient, respectively.
The IUCN credits the recovery of these fish to “countries enforcing more sustainable fishing quotas and successfully combating illegal fishing.” Budget conscious seafood lovers might be particularly relieved by the news regarding the albacore and the yellowfin, some of the most ubiquitous tunas on store shelves. They’ll be sharing their Least Concerned status with the skipjack tuna (Katsuwonus pelamis), meaning that they are now considered “sustainably caught and managed,” according to Craig Hilton-Taylor, head of the IUCN Red List Unit.
However, the IUCN also emphasizes that “many regional tuna stocks remain severely depleted.” For example, the Atlantic bluefin population in the Gulf of Mexico has continued to decline in recent decades, and the yellowfin are still being overfished in the Indian Ocean. Additionally, based on newly available stock assessment data, the Pacific bluefin (Thunnus orientalis) was moved from Vulnerable to Near Threatened, being “severely depleted at less than 5% of its original biomass,” according to the IUCN. Nevertheless, Dr. Bruce B. Collette, Chair of the IUCN SSC Tuna and Billfish Specialist Group, said in a recent statement, “These Red List assessments are proof that sustainable fisheries approaches work, with enormous long-term benefits for livelihoods and biodiversity.” That’s good news for both diners and nature lovers.
[Image description: A group of Atlantic bluefin tuna swim in blue waters.] Credit & copyright: Danilo Cedrone (United Nations Food and Agriculture Organization)/Public Domain