No thanks
Continue
Whoops!
Your free trial of Curious+ has expired
Daily Curio
An amusing daily fact from the Curious team.
Previous Next
Daily Curio #2117 October 21, 2020
1 CQ
On the Auction Block: The Tyrant Lizard King 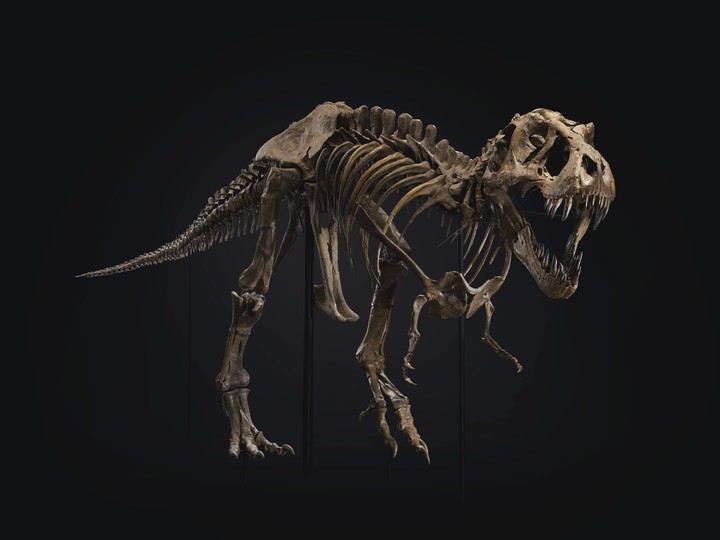 Last week, the world discovered just how much a priceless fossil was worth—$31.8 million dollars. Known as BHI 3033 or Stan, the fossil is considered the most complete skeleton of a male T. rex in existence—standing at 12 feet high and 40 feet long, Stan has nearly 200 original bones. The Tyrannosaurus originated in modern-day Asia, evolving into the Tyrannosaurus rex (literally, king of the tyrant lizard) when they crossed into modern-day North America. Stan was found in Harding County, South Dakota. During the Cretaceous period, South Dakota was once a lush subtropical climate filled with redwood, fern, and ginkgo trees. Scientists speculate Stan hatched from an egg, grew up with his family, and then found a lifelong mate. Together, the pair lived a volatile life—often getting into fights over food and territory. Stan's skeleton is marked with the scars of these battles. He has ribs that were broken and healed, as well as scars the size of a T. rex's tooth on his body and in the back of his skull. Miraculously, Stand survived the hole in his head. When Stan died, sometime in the late summer or early fall, his carcass rotted in the sun on a stream's sandbar. Over 65 million years his skeleton became preserved in layers of sand, mud, and leaves. In 1987, amateur paleontologist, Stan Sacrison (the T. rex's namesake), discovered Stan in the Hell Creek formation. Eventually, the Black Hills Institute of Geological Research poured funds into the excavation, which took over 3,000 man-hours between April 14 and May 7, 1992. Scientists have spent the last three decades studying Stan, even making cast replicas that are on display around the world. Which might make you wonder why Stan was recently auctioned off. Well it turns out the Black Hills Institute really had no choice. One of their shareholders, an embittered former board member, sued the company to liquidate its assets. A judge then ruled the Institute had to sell Stan to pay off the shareholder. Paleontologists mourned the loss, as Stan was sold to an undisclosed buyer. Whether scientists will continue to have access to the specimen remains uncertain. There is a global, and often seedy, marketplace for fossils. Buyers include celebrities like Nicolas Cage and billionaire Bill Gates, although for vastly different reasons. Of course, most fossils in museums are either donated by or on loan from private collections. Nonetheless, most academics believe the fossils have sedimental value, and should not be sold.
Image credit & copyright: Christie's, Lot 59, The King of the Dinosaurs
More about this Curio:
Christie's: "Tyrannosaurus Rex."
Black Hills Institute of Geological Research, Inc.: "Stan."
National Geographic: "Stan the T. rex just sold for $31.8 million."