No thanks
Continue
Whoops!
Your free trial of Curious+ has expired
Daily Curio
An amusing daily fact from Justin Kitch, Curious CEO.
Previous Next
Daily Curio #2041 May 21, 2020
1 CQ
Elephant lightweights 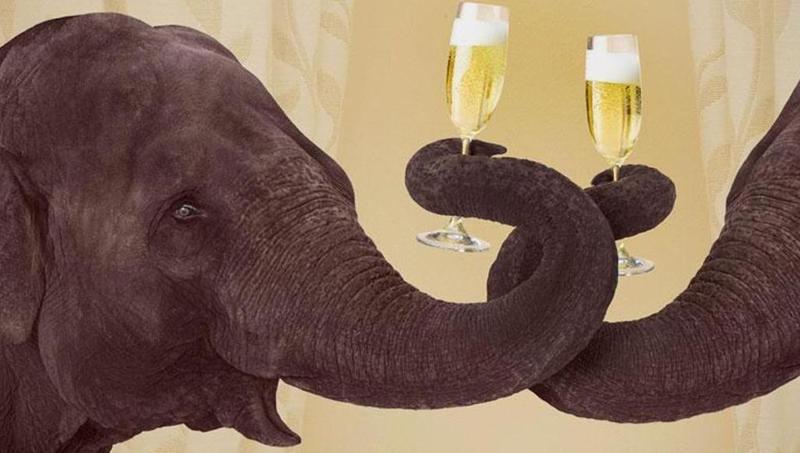 Here it is: I bet you I could outdrink an elephant. I know, I know. You're asking, "What kind of boozehound could outdrink an elephant?" Well, according to a new study, any of us humans would stand a fighting chance at beating Jumbo in a game of drink. The study, led by Mareike Janiak of the University of Calgary in Canada, analyzed 85 animal species to gauge their imbibing abilities. First, Janiak and her cohort hypothesized that a gene called ADH7 plays a pivotal role in alcohol metabolization. Simply put, this gene helps eliminate the intoxicating chemicals that result from our bodies processing alcohol. Humans have long tooled this gene to perfection, even before we started fermenting our pantheon of drinks. As have all animals that routinely eat fruits and nectars, like other primates and bats. This is because natural alcohol concentrations in fruits and nectars can be as high as 3.1 and 8.1 percent, respectively. This ability to easily process alcohol is extremely important in bats, which already fly erratically and would do far worse drunk. So our mammalian ability to guzzle booze goes back at least 10 million years, to a common primate ancestor (and possible party animal). But let's get to the lightweights (or should I say heavyweights?). Mammals that hardly ever digest fruits have enfeebled ADH7 genes, due to a generational, evolutionary lack of wear and tear. Which means they handle their alcohol poorly, to say the least. These mammals—ironically enough—include massive ungulates like cows, horses, and elephants. Elephants eat fruit, but far less proportional to our diets and body mass. So it's definitely possible any one of us could outdrink an elephant. Regardless, I'd rather sit back and responsibly sip drinks with our trunked friends. The last thing I want to be around is an elephant who drank more than they could handle!
Image credit & copyright: BBC

More about this Curio:
New York Times: "Elephants Really Can't Hold Their Liquor"
The Royal Society: "Genetic evidence of widespread variation in ethanol metabolism among mammals: revisiting the 'myth' of natural intoxication"
New Scientist: "Analysis of 85 animals reveals which are best at holding their alcohol"
Science News: "Why mammals like elephants and armadillos might get drunk easily"