No thanks
Continue
Whoops!
Your free trial of Curious+ has expired
Daily Curio
An amusing daily fact from the Curious team.
Previous Next
Daily Curio #2013 April 2, 2020
1 CQ
Charlemagne's fashion victims 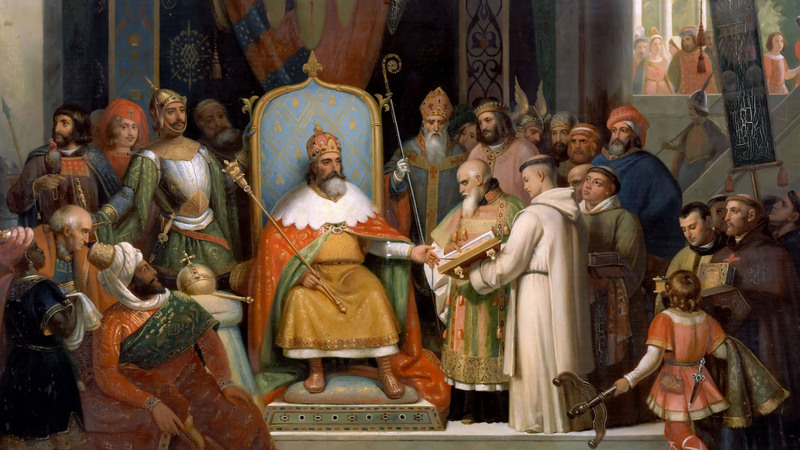 Charlemagne, also known as Charles the Great, was born on today's date in 742… or 747… or maybe 748. Nobody knows for sure. One thing we do know is that for a man who would become known as "The Father of Europe," Charlemagne kept his wardrobe surprisingly modest. Don't be fooled by the modern depiction of him shown above. The Frankish king who conquered half of Europe typically wore the standard clothing of his people: a blue cloak, tunic, hose, a linen shirt, and maybe a jerkin of otter skin in the winter, for a Game of Thrones flair. He despised playing dress up, and generally limited his displays of opulence to a sword with a bejeweled hilt. But even then, he sported more practical weapons whenever possible. There were exemptions to Charlemagne's usual digs, however: when he had to attend ecclesiastical ceremonies. Even though he loathed foreign clothing (which contrasted Frankish simplicity), he donned Romanesque robes in the company of the Pope. In turn, Charlemagne vented his disdain for high fashion on his own advisers. On one occasion, some of his courtiers returned from a mission wearing fashionable clothing gifted to them while abroad. These gaudy outfits were festooned with ribbons and feathers, and the courtiers were eager to flaunt them. Charlemagne responded by immediately whisking them off on a hunt without sparing them time to change. The path he picked was mired in glades, thickets, briars, and rainfall. Once the miserable hunt ended, Charlemagne forced his shivering courtiers to then attend his every need in their disheveled, dripping garments until midnight. The next morning, the king finally launched into a bizarre but well-intentioned rant about how the courtiers should never let their manhood fall victim to foppish luxury. I've heard of workplace dress codes, but never any like Charlemagne's policy—not exactly what I'd call casual!
More about this Curio:
Mental Floss: "13 Facts About Charlemagne"
Biography: "Charlemagne"
BBC News: "Charlemagne"
ThoughtCo.: "Important Facts about Charlemagne"