No thanks
Continue
Whoops!
Your free trial of Curious+ has expired
Daily Curio
An amusing daily fact from the Curious team.
Previous Next
Daily Curio #1576 June 19, 2018
1 CQ
The space food race 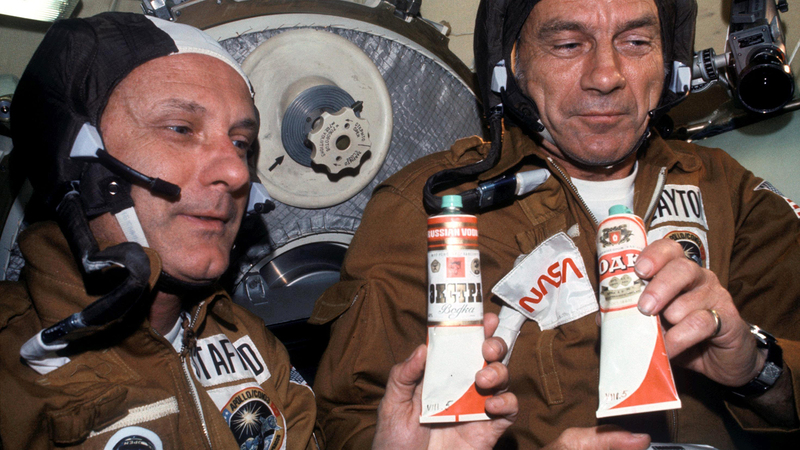 55 years ago today, Russian cosmonaut Valentina Tereshkova became the first woman in space. It was the beginning of the space race, with Russian and American space programs trying to one-up each other. Some things never change. Even though the world's nations now cooperate on space exploration through the International Space Station program, there is still a healthy competitive streak between the astronauts. Namely, they don't like each other's space food. Russians insist almost every meal include fish, whether smoked, caviar'ed, or pasted. They also favor a bubblegum-pink substance squeezed from a toothpaste tube labeled борщ: borscht paste. Italians were so upset with the ISS coffee options that they brought along their own zero-gravity espresso machine. And farro with salmon and asparagus. And shrimp with zucchini pesto and lime. Korean space scientists spent years engineering a form of kimchi that could travel to ISS with the first South Korean astronaut in 2008. They had to reduce the smell dramatically—for the sake of their Russian hosts—and were forced to radiate the bacteria which gives the national food its tangy flavor. But it was technically still kimchi. The Japanese created Space Ramen; and the Chinese have been known to bring along dumplings when traveling during the Lunar New Year. After all, they are closer to the moon! Unfortunately, in spite of all this effort, food doesn't taste very good in zero gravity. The astronauts tend to lose their sense of smell because fluids don't drain from their heads. But hey, just the idea of food from home must taste good when you're floating in a tiny box 250 miles above the earth.
More about this Curio:
The Atlantic: "Eating Like an Astronaut Means Kimchi for Koreans and Lasagna for Italians"
NASA: "Eating in Space"
NPR: "Why Astronauts Crave Tabasco Sauce"
Smithsonian: "A Rare Look at the Russian Side of the Space Station"
Buzzfeed: "This Is What China's Astronauts Will Eat In Space"