No thanks
Continue
Whoops!
Your free trial of Curious+ has expired
Person, Place, or Thing
Our encyclopedia of the odd and awe-inspiring.
Previous Next
December 4, 2022
1 CQ
Person: Santa Claus 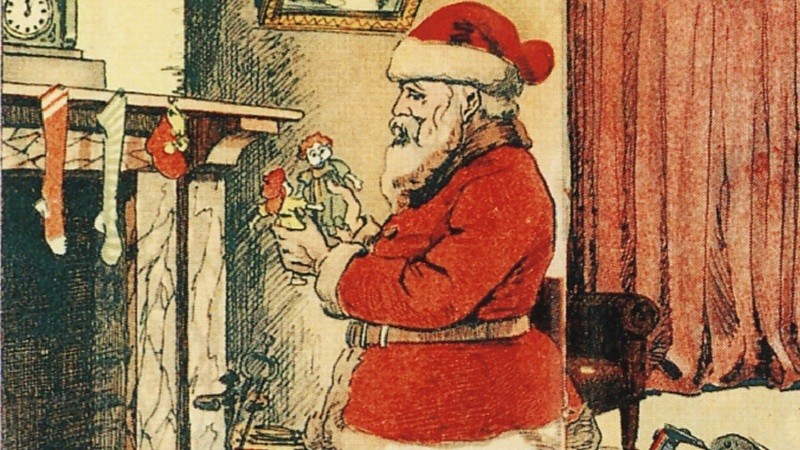 Ho ho ho! Santa Claus is a Christmas mascot recognized the world over, but he wasn’t always the plump, red-suited figure he is today. In fact, Santa was born from the merging of several European cultures and religious traditions mixed with good, old-fashioned American advertising.
We’ve written before about Saint Nicholas, from whom Santa Claus takes his “Saint Nick” nickname. From the fourth century onward, this Catholic Saint was renowned for his kindness toward children, and in France it was even said that he had the power to resurrect them. Yet, the real Saint Nicholas, also known as Nikolaos of Myra, bore little physical resemblance to Santa Claus. His evolution into Santa began with the religious traditions that sprung up to honor him, especially Saint Nicholas Day, also known as the Feast of Saint Nicholas. Celebrated on December 6, this day not only involved feasting but was considered a lucky day on which to get married or make big purchases. Saint Nicholas Day, and by extension Saint Nicholas himself, was especially popular in Holland. In the 18th century, Dutch Catholics began fleeing religious persecution in Europe, bringing their love for Saint Nicholas with them. We have the Dutch to thank for Santa’s modern name, which evolved from “Sinter Klaas”, a Dutch nickname for Saint Nicholas. By the late 1700s, this name was anglicized into “Santa Claus.”
But Saint Nicholas and Dutch settlers aren’t the only ones who contributed to the Santa Claus story. From the 15th century onward, many Europeans told tales of Father Christmas, a figure whose appearance was loosely based on Saxon and Norse folklore. Although Father Christmas wasn’t known to give gifts, he did wear green or red fur-trimmed robes and ride through the winter woods on either a horse or a goat, encouraging people to celebrate Christmas with food and wine. Sometimes, he pulled a sleigh behind him loaded with food and drink. On his head, Father Christmas often wore a fur-trimmed hat or a holly wreath. In 1843’s A Christmas Carol, the Ghost of Christmas Present bears a striking resemblance to Father Christmas.
In Washington Irving’s 1809 satirical book History of New York, the writer melded Dutch ideas about Saint Nicholas with the appearance of Father Christmas to create a chubby figure who dressed in winter clothes normally worn by Dutch sailors. The book was meant to poke fun at Dutch culture in New York, but Irving unintentionally created an enduring image of Santa Claus. In 1821, Santa finally got his reindeer thanks to an anonymous poem published in the popular holiday children’s book The Children's Friend: A New-Year Present to the Little Ones from Five to Twelve. The poem was called Old Santeclaus with Much Delight, and it described Santa riding on a sleigh pulled by a single reindeer. The author likely chose a reindeer because of Santa’s associations with Europe, where reindeer are a native species. This version of Santa Claus also brought childrens’ gifts, in addition to food and wine, on his sleigh. This makes sense, since gift-giving was a popular Christmas tradition in both the U.S. and Europe by then. But Santa’s popularity really shot through the roof (or up the chimney) with the publication of another anonymous poem in 1823: A Visit from St. Nicholas, or The Night Before Christmas, as it is better known today. In it, Santa is described as a fat, jolly “elf” with a red suit, who comes down the chimney to leave gifts in childrens’ stockings. He rides a sleigh pulled by eight reindeer, each of whom has their own name, though two of them, Dunder and Blixem, were later changed to the more “German-sounding” Donner and Blitzen.
From there, Santa fell into the hands of American marketers, who had a field day with the idea of a magical figure who could help them sell Christmas gifts. By the 1840s, U.S. newspapers were adding images of Santa Claus to Christmas ads. Department stores began hiring actors to pose as Saint Nick, and the tradition of the “mall Santa” was born. In 1924, the Macy’s Thanksgiving Day Parade featured Santa Claus for the first time, and he remains an important figure in the parade to this day. As for Europe’s Father Christmas, Santa Claus became so popular that stateside stories of him spread across the pond and today Father Christmas and Santa Claus are practically synonymous. No more wintertime horseback rides for this guy!
[Image description: A vintage illustration of Santa Claus leaving toys at a fireplace with hanging stockings.] Credit & copyright: kodomo no tomo, Wikimedia Commons, Public domain