No thanks
Continue
Whoops!
Your free trial of Curious+ has expired
Person, Place, or Thing
Our encyclopedia of the odd and awe-inspiring.
Previous Next
December 2, 2022
1 CQ
FLASHBACK | Thing: The Harlem Globetrotters 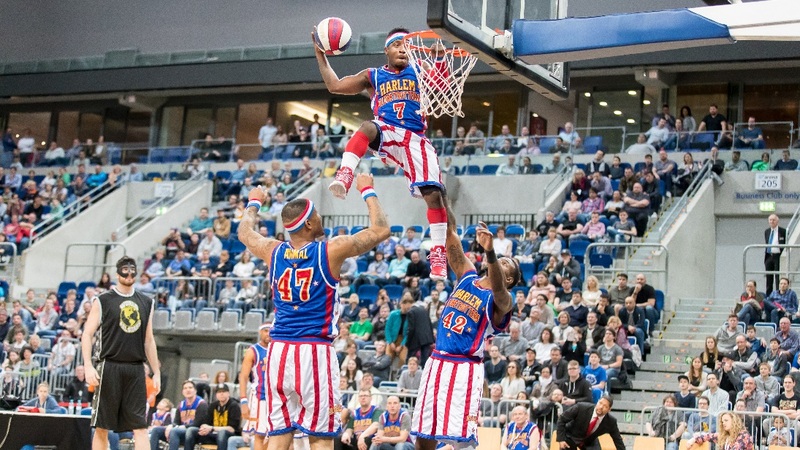 It's Flashback Friday and also Play Basketball Day! Enjoy these sports-focused curios. These high-flying kings of the court are more than just colorful uniforms and trick plays. The Harlem Globetrotters exhibition basketball team has been mesmerizing audiences since 1927. They’ve even made guest appearances on Scooby Doo and starred in their own cartoon series. Today, their goal is to inspire kids to be healthy and hardworking, but the team originated as a way to drum up business for a local ballroom…not in Harlem, but in Chicago.
The Harlem Globetrotters were born in Bronzeville. Sometimes called “a city within a city”, Bronzeville included most of Chicago’s South Side from the 1920s to the 1950s, and served as the city’s center for Black culture and business during a time of intense racial segregation. Famous Black entertainers, like Louis Armstrong, lived and worked in Bronzeville, and the area became famous for jazz and blues music, and for the nightclubs and dance halls where it was performed. In 1926, an enormous entertainment venue called The Savoy Ballroom opened its doors, playing host to entertainers like Ella Fitzgerald and Billie Holiday. The ballroom also hosted sporting events, from boxing matches to figure skating exhibitions. In 1927, venue organizers formed an exhibition basketball team using recruits from Wendell Phillips High School, Chicago’s only all-Black high school. Named the Savoy Big Five, the team’s purpose was to perform at the Savoy before public dances to boost the ballroom’s ticket sales. The team drew crowds as intended, but a dispute over wages ended with the team leaving the Savoy, in 1928. Some players, led by former team leader Tommy Brookins, formed a new, independent team which Brookins named the “Globe Trotters.”
The Globe Trotters began touring southern Illinois, playing exhibition matches and impressing crowds with their acrobatic trick shots. Players even sang and played music between games, to keep crowds invested. But Brookins knew that his team needed an experienced promoter in order to reach its full potential. So, he hired Abe Saperstein, a well-known booking agent and manager. Although the team’s players had all been born and raised in Chicago, Saperstein dubbed them the “Harlem Globetrotters.” At the time, Harlem was considered the center of Black culture in America. Since almost all sporting venues were racially segregated, Saperstein felt that the new name would help the team avoid trouble, ensuring that anyone who booked them would know their race, upfront. Under Saperstein’s leadership, the Harlem Globetrotters transformed from an exhibition team to a competitive one. In 1929, they began playing matches in Illinois and Iowa, then across the country. In their first seven years, the team played over 1,000 games. With no money for a proper bus, players rode to matches in Saperstein’s unheated truck.
Within a decade, the Harlem Globetrotters had made a proper name for themselves, not just because of their on-court flare and penchant for busting out acrobatic moves during games, but for beating almost every team they went up against. In 1940, the Globetrotters defeated the Chicago Bruins to win their first World Basketball Championship. In 1946, the NBA was formed as an all-white league. Two years later, The Harlem Globetrotters took on the league’s best team, the Minneapolis Lakers, and beat them 61 to 59, with a dramatic final long shot to boot. The game made waves even outside the sports world, and was key in the NBA’s decision to integrate, two years later. Soon after, former Globetrotter Chuck Cooper became the first Black player to sign an NBA contract.
Even throughout their competitive career, the Globetrotters were still known for their acrobatic feats, ball-handling tricks, and comedic antics. In the early 1950s, they once again became an exhibition team. Today, the Globetrotters have performed in 123 countries and territories around the world. Their focus is on community outreach, especially when it comes to getting children interested in sports and teamwork. The Globetrotters’ modern motto is C.H.E.E.R., which stands for cooperation, healthy mind and body, effort, enthusiasm and responsibility. Now there’s something for young Globetrotter fans to shout about.
[Image description: Wearing their famous uniforms, three Harlem Globetrotters perform a basketball trick as one of them, airborne, prepares to dunk a ball.] Credit & copyright: Sven Mandel, Wikimedia Commons, image cropped for size.