No thanks
Continue
Whoops!
Your free trial of Curious+ has expired
Person, Place, or Thing
Our encyclopedia of the odd and awe-inspiring.
Previous Next
November 20, 2022
1 CQ
Thing: Cranberry sauce 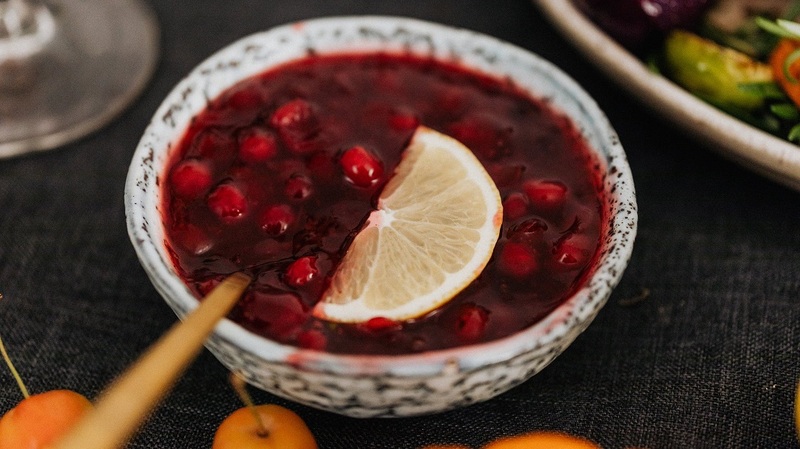 There’s nothing quite like cranberry sauce on Thanksgiving! We mean that literally; Thanksgiving is the only day each year that most Americans top their meat with fruit sauce. We’ve written before about how cranberries are grown (and how many are eaten on Thanksgiving alone—around a fifth of all the cranberries grown each year) but just how did these tart little berries come to be so closely associated with Thanksgiving, in particular?
Cranberries certainly have a rightful claim to the Thanksgiving table: they’re one of just three fruits native to the U.S, along with blueberries and concord grapes. Since Thanksgiving is a holiday meant to bring Americans together, it makes sense that native foods should feature heavily. After all, turkeys and pumpkins are also native to the Americas. Creating a sweetened cranberry sauce was difficult for North America’s first European settlers, though, as the sugar cane they’d brought with them refused to grow in New England, where their first colonies were located. (Today, the only places in the continental U.S. that grow sugar cane are Florida, Louisiana, and Texas.) Although there is evidence that some Native Americans were eating sweetened cranberry sauce as early as the 17th Century, there’s no way of knowing if the sauce was present at the 1621 feast between the Pilgrims of Plymouth Colony and the Wampanoag tribe which eventually inspired Thanksgiving.
Once colonists were able to grow sugar cane, though, sweetened cranberry sauce became a popular accompaniment to meat, especially wild-caught meats, like venison and turkey. Compared with meat from domesticated animals, this wild-caught meat had a strong, gamey flavor that some colonists found a tad overwhelming. Sweetened fruit sauce was just the thing to cut through the pungent taste. In 1796, cranberry sauce was mentioned in a publication for the first time, when Amelia Simmons’ American Cookery suggested serving turkey with it.
By the time writer and activist Sarah Josepha Hale persuaded Abraham Lincoln to declare Thanksgiving a National Holiday in 1863, sweetened cranberry sauce was a widespread accompaniment to turkey, and turkey was perfectly positioned to take the starring role in Thanksgiving. The bird was more or less seen as the American equivalent of goose, which traditionally served as the main dish at British holiday celebrations. However, early cranberry sauce usually consisted of fresh cranberries cooked with water and sugar, then stirred to a chunky consistency. Although some American undoubtedly still make their own, fresh cranberry sauce, the vast majority of today’s sauces are canned. One of cranberry sauce’s most infamous variations—can-shaped jellied cranberry sauce—is also one of its most popular. But such modern takes on cranberry sauce weren’t popularized until the 19th century, when drastic agricultural changes made it possible to harvest more berries at once.
Cranberries grow in peat bogs, wetlands with dry areas consisting of peat, or partially decayed vegetation. For centuries, cranberry farmers dry-harvested cranberries directly from their vines, which was very laborious. As farming irrigation improved, though, more water could be brought into bogs, which allowed more berries to grow. Eventually, wet-harvesting, or flood-harvesting, became the standard way to harvest cranberries. The process consists of flooding cranberry bogs with around 18 inches of water, then shaking the berries from their vines using farming vehicles called water reels. The berries then float on the water’s surface, and can be easily corralled. Flooding isn’t only used to harvest cranberries, though. It’s also used to protect them in winter, when cold, dry winds can wither their vines. The moisture of a winter flood (which farmers usually apply until March) helps the berries pull through.
The introduction of flood-harvesting caused cranberries to explode in popularity across the U.S., in the 19th Century. Ocean Spray, an agricultural cooperative established by three cranberry farmers in 1930, quickly became one of the largest cranberry producers in the world, and remains so today. Ocean Spray began selling canned cranberries in the late 1930s, and released jellied cranberry sauce in 1941. The gelatin-based cooking trend of the 1940s and 1950s helped the sauce become a hit, and it has endured as an in-demand Thanksgiving staple ever since. There’s just something satisfying about slicing and serving perfect circles of sauce to everyone at the table. Happy Thanksgiving!
[Image description: A bowl of cranberry sauce topped with a lemon slice.] Credit & copyright: Karolina Grabowska, Pexels

More about this Curio:
Insider: "This Is Why We’ve All Been Eating Cranberries on Thanksgiving for Hundreds of Years."
The Kitchn: "How Canned Cranberry Jelly Became a Thanksgiving Icon."
Mental Floss: "Why Do We Eat Cranberry Sauce on Thanksgiving?"