No thanks
Continue
Whoops!
Your free trial of Curious+ has expired
Person, Place, or Thing
Our encyclopedia of the odd and awe-inspiring.
Previous Next
February 6, 2022
1 CQ
Thing: Groundhog Day 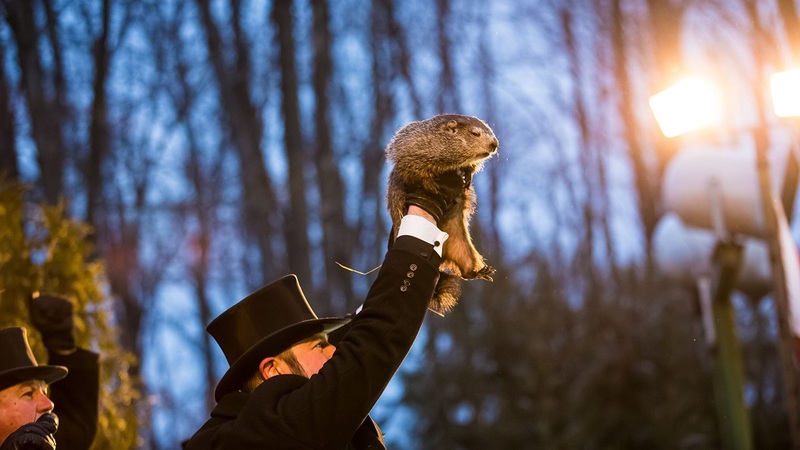 Keep the hot chocolate flowing! According to Punxsutawney Phil, the world’s most famous weather-predicting groundhog, there’s six more weeks of winter on the way. We’ve written briefly before about the origins of Groundhog Day, but read on for a deeper dive into this strange holiday’s history, the lore surrounding Punxsutawney Phil himself, and why, under different circumstances, he might have been a hedgehog.
Groundhog Day has its origins in the ancient Christian holiday of Candlemas, also known as the Presentation of the Lord, which originated in 4th Century Jerusalem. The event commemorates the day that the Virgin Mary, a Christian religious figure, presented her son, Jesus, to God at the Temple of Jerusalem. By the 5th Century, it was popular for celebrants to bring candles for priests to bless, hence the name Candlemas. In England, a folk tradition about the weather on Candlemas sprang up. Supposedly, good weather on Candlemas meant that winter would stick around longer. However, according to an English folk song on the topic, “If Candlemas brings clouds and rain, go Winter, and come not again.” As Germany took up their own Candlemas traditions, a new element was added to the weather-predicting aspect of the holiday. If the sun was shining brightly enough for a hedgehog to see its shadow on Candlemas, then four more weeks of winter would supposedly follow. This number was later changed to six weeks. In some parts of Germany, the less-prickly badger stood in for a hedgehog.
In the 1700s, many German immigrants settled in the American Midwest, including the western Pennsylvania town of Punxsutawney. Since there were no wild hedgehogs and few visible wild badgers, German immigrants had to pick a new animal to forecast the weather on Candlemas. Luckily, groundhogs were abundant. By the late 1700s, German immigrants in Pennsylvania, who eventually became known as the Pennsylvania Dutch, had popularized the idea of a groundhog predicting the weather on February 2.
In 1886, the Punxsutawney Spirit newspaper reported about the groundhog’s prediction for the first time. The following year, Clymer Freas, an editor at the Punxsutawney Spirit decided to throw an official celebration. Yet the first Groundhog Day celebrations weren’t as groundhog-friendly as one might imagine. Freas was a member of the Punxsutawney Elks Lodge, which hunted groundhogs. The first Groundhog Day included a gathering at Gobbler’s Knob, a wooded area in town, where a live groundhog gave its weather prediction. Attendees then chowed down on groundhog meat, served picnic-style. By 1899, many people in the U.S. observed some form of Groundhog Day. Punxsutawnians, however, were determined to be seen as the holiday’s founders, and upped the ante by forming the Punxsutawney Groundhog Club to preside over their celebration and conduct an annual groundhog hunt. Members began dressing in suits and top hats during the festivities, and keeping several captive groundhogs for Punxsutawnians to observe throughout the year. That number eventually shrank to one, official, weather-predicting groundhog. In 1961, it was named Phil as a possible reference to the dignity of Prince Philip, Duke of Edinburgh.
Punxsutawney Phil is certainly royalty in his own right, even today. While off-duty, he lives in an indoor, climate-controlled zoo-like enclosure near the center of town. There’s plenty of lore associated with the famous rodent. Although science says that groundhogs live for around four to six years, legend states that Phil has been alive since 1886. According to the official Groundhog Day Website, “Punxsutawney Phil gets his longevity from drinking the "elixir of life," a secret recipe. Phil takes one sip every summer at the Groundhog Picnic and it magically gives him seven more years of life.” On Groundhog Day, Phil is transported to Gobbler’s Knob, where he makes his famous prediction in front of a gathered crowd. However, Phil doesn’t wait for audiences to spot his shadow or not. According to lore, he tells his prediction directly to the President of the Groundhog Club, whose magical wooden cane allows him to understand Phil’s “groundhogese” language. The President then reads Phil’s prediction from a corresponding scroll. Modern Groundhog Day festivities in Punxsutawney also include a talent show, a banquet, and a formal ball. We don’t speak “groundhogese”, but we’re pretty sure that Phil would say he’s glad the groundhog hunt was dropped.
[Image description: Punxsutawney Phil is lifted into the air by a member of the Inner Circle, wearing a suit and top hat.] Credit & copyright: Chris Flook, Wikimedia Commons, image cropped for size, this image is hereby distributed under the same license linked here.