No thanks
Continue
Whoops!
Your free trial of Curious+ has expired
Person, Place, or Thing
Our encyclopedia of the odd and awe-inspiring.
Previous Next
January 30, 2022
1 CQ
Thing: LEGO 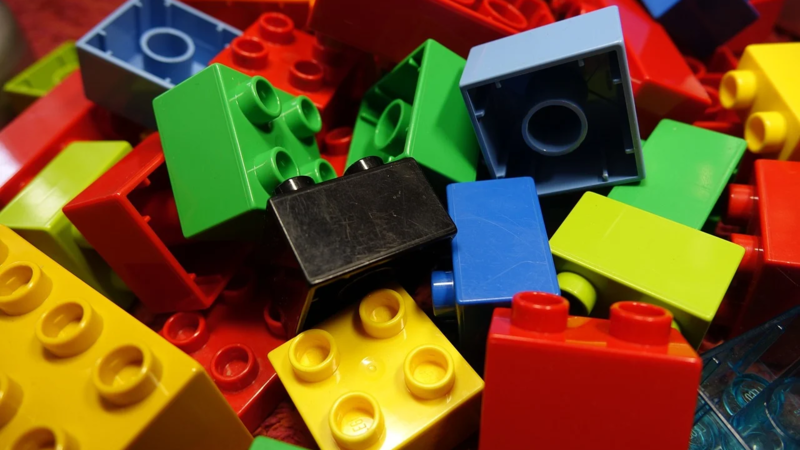 Happy early birthday, LEGO! January 28 was National LEGO Day, and on August 10, the toy brand will celebrate its 90th anniversary. These colorful, interlocking bricks have been inspiring children (and hurting feet) for decades. Yet they were born out of pretty desperate circumstances, and their history includes enough ups and downs for a LEGOLAND roller coaster.
LEGOs weren’t invented by a lifelong veteran of the toy business, but rather by Danish carpenter and furniture-maker Ole Kirk Christiansen, who had been plagued by a string of bad luck beginning in 1924. That year, a fire destroyed both Christiansen’s workshop and his home. After he managed to build a new workshop, the Great Depression of 1929 caused massive financial damage to his business. Christiansen was forced to pivot from creating large, expensive goods, like furniture, to smaller, more affordable items. He began to make wooden toys. As the poor economy continued to pummel his business, Christiansen’s toys became more innovative, particularly his pull toys, which he crafted to move their heads, feet, or eyes when pulled. In 1932, he renamed his company LEGO, from the Danish words “leg godt”, meaning “play well.”
In the years following the Great Depression, things finally started looking up for Christiansen, as his toys were selling well and had gained a reputation for having good quality. By the mid-1940s, plastic was becoming a popular new material to make toys from. In 1939, a British toy company called Kiddicraft patented a new kind of plastic toy that was meant to improve upon wooden stacking blocks. Called Self-Locking Bricks, they were sets of plastic bricks which could be snapped together in different configurations. They were released onto the market in 1947, and upon seeing them, Christiansen was convinced that he could improve upon their design. He added hollow tubes to the underside of each brick to help them lock together better, and created molds to extremely precise measurements, so that his bricks could fasten seamlessly to one another. In 1949, two years after Kiddicraft released their bricks, LEGO released their version, which they dubbed Automatic Binding Bricks.
The name might not have been catchy, but the toys themselves caught on. In 1958, Christiansen’s son, Godtfred Kirk, took over his father’s company, patented the bricks, and began selling them as LEGO bricks. It’s worth noting that this series of events is why some people consider LEGO’s anniversary to be 1932, when the LEGO company was formed, while others consider it to be 1949, when the first Automatic Binding Bricks were produced, and still others claim it to be 1958, when the bricks themselves were dubbed LEGO bricks. In any case, LEGO bricks proved so popular that by 1968, the first LEGOLAND theme park had opened in LEGO’s hometown of Billund.
It wasn’t all sunshine and geometric playsets from there, though. Although LEGOs remained popular throughout the 1970s and 80s, the company’s fortune took a sharp downturn in the 1990s. Around that time, LEGO had begun focusing less on traditional bricks and playsets and more on educational toys, especially ones involving robotic components. They were also manufacturing many more styles of toys and individual bricks than ever before, which increased costs significantly. By the early 2000s, LEGO was nearing bankruptcy. In 2001, Jorgen Vig Knudstorp took over as LEGO CEO, and immediately slashed the number of LEGO brick pieces being produced from 12,900 to 7,000. He took LEGO back to basics, re-introducing the types of playsets that had made the company famous—with one glaring exception. Knudstorp ramped up the production of Bionicles, a line of LEGO action-figure-like toys that kids could construct, collect, and modify. The line proved so popular that it helped bring LEGO’s profits back up and became its own franchise which included video games, a T.V. miniseries, and movies.
Bionicle’s success paved the way for LEGO’s modern approach, which involves creating playsets of licensed properties, from Harry Potter to Star Wars. Of course, LEGO still makes traditional, entirely original playsets too, and North American LEGO enthusiasts have access to 90 LEGO stores, most of which also sell the loose bricks that started it all. Sometimes, sticking to the basics is the best way to stick it out.
[Image description: A colorful assortment of LEGO bricks] Credit & copyright: Semevent, Pixabay

More about this Curio:
History: "The Disastrous Backstory Behind the Invention of LEGO Bricks."
Mental Floss: "The Early History of LEGO."
ThoughtCo: "The History of Lego."