No thanks
Continue
Whoops!
Your free trial of Curious+ has expired
Person, Place, or Thing
Our encyclopedia of the odd and awe-inspiring.
Previous Next
November 26, 2021
1 CQ
FLASHBACK | Place: Alaska 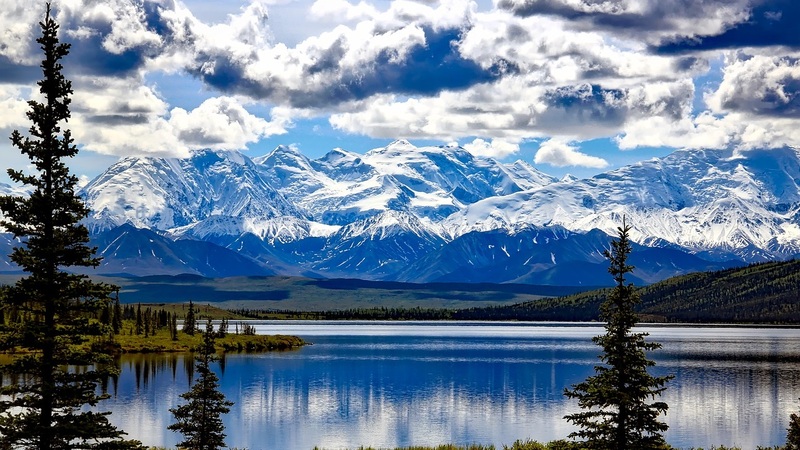 It's Flashback Friday! In honor of National Native American Heritage Day, enjoy these curios about Native American history, ingenuity, and expression. It's easy to see why this state is called "the last frontier"! Positioned near the top of North America, between the Pacific and Arctic oceans, Alaska is one of the U.S.'s most remote states. It's a place replete with wilderness, natural resources, and an impressive array of arctic wildlife. Yet it took quite a while for Alaska to become United States property, let alone a full-fledged state, and not everyone was happy with Alaska's statehood.
Alaska has been populated by humans since at least 14,000 B.C.E., when nomadic people crossed the Bering land bridge. Today, there are six main groups of Native Alaskans still living in the state: the Inupiat, the Haida, the Yuits, Athabascans, Aleuts, and Tlingits. The name "Alaska" comes from the Aleut word "Alaxsxaq", meaning "mainland" in English. In the 17th Century, contact was established between Native Alaskans, Russians, and Europeans. By the 18th Century, the Haida engaged in regular trade with them. However, when the Russians the majority of Alaska as a colony, in 1733, tensions began to rise between Native Alaskans, who had called Alaska home for thousands of years, and outsiders looking to profit from its rich resources.
The 18th and 19th Centuries in Alaska were marked by conflict and disease. Nearly 80 percent of the Aluet population was destroyed by foreign illnesses due to contact with Russia. In 1857, a battle broke out between American settlers and a group of Haida and Tlingits who refused to recognize American authority. This culminated in a U.S. military officer, Colonel Isaac Ebey, being shot and beheaded by the Tlingits. In 1867, the same year that the United States bought Alaska from Russia for $7.2 million, an American ship brought smallpox to Alaska's shores. The Haida population dwindled from around 6,600 individuals to around just 830.
Russia had its reasons for selling Alaska. During the 19th Century, Russia and England were engaged in a power struggle called "the great game", in which both sought to become the most powerful nation on earth. As war threatened to break out between the two countries, Russia realized that Alaska would be strategically difficult to defend, and feared the humiliation of losing it to Britain. Instead, they opted to sell it to the United States, although the change of ownership was unpopular on all fronts at first. Many Russians felt that Alaska had been given up too quickly or too cheaply. Many Native Alaskans saw the deal as yet another foreign attack on their way of life. Many Americans didn't understand how their country could benefit from owning an "icebox" state. Some even referred to the deal as "Seward's icebox" or "Seward's folly", so named for the U.S. Secretary of State William Seward, who had signed the deal. However, the American populace changed its tune in 1896, when gold was discovered along a Klondike River tributary running through Canada and Alaska, ushering in the Klondike Gold Strike.
Despite having occupied Alaska for thousands of years, the indigenous peoples did not become U.S. citizens when Alaska was purchased. This meant that they couldn't vote or technically own property in their homeland. Their citizenship was finally recognized in 1924, when the Indian Citizenship Act was passed. 35 years later, in 1959, U.S. President Dwight D. Eisenhower signed the Alaska Statehood Act, making Alaska the 49th U.S. state. Importantly, the act contained language guaranteeing certain ancestral lands to Native Alaskans. After several more decades of dispute, President Richard Nixon finally ceded 44 million acres of federal land to Native Alaskans, in 1971.
Although Alaska was scarred by colonialism, today around 120,000 of Alaska's nearly 740,000 people are Native Alaskan. The state also maintains a reputation as one of the most beautiful places on earth. Alaska contains the U.S.'s largest national forest, Tongass National Forest. It is also home to three of the world's eight bear species: black bears, brown bears, and polar bears, as well as more wolves than anywhere else on earth. Talk about a wild place with a wild history!
Image credit & copyright: 12019, Pixabay

More about this Curio:
Alaska Federation of Natives: "Alaska Native Peoples."
History: "Alaska admitted into Union."
Smithsonian Magazine: "There Are Two Versions of the Story of How the U.S. Purchased Alaska From Russia."