No thanks
Continue
Whoops!
Your free trial of Curious+ has expired
Person, Place, or Thing
Our encyclopedia of the odd and awe-inspiring.
Previous Next
October 3, 2021
1 CQ
Thing: The headless horseman 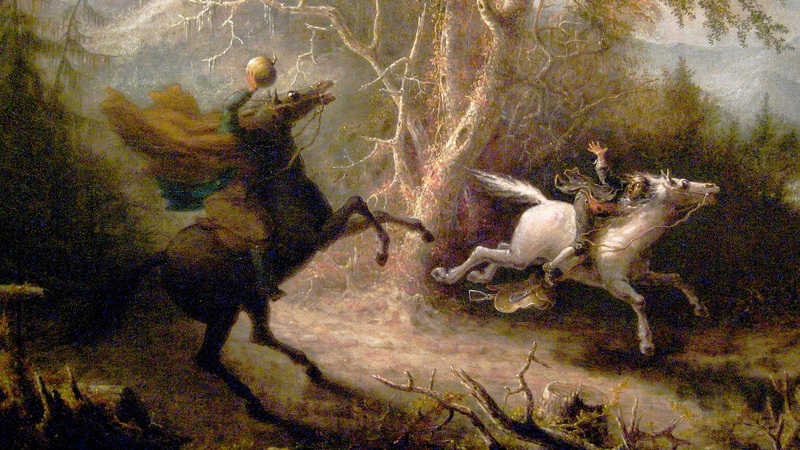 Don’t think we’re getting a head of ourselves. It may not be Halloween yet, but early October is the perfect time to brush up on the history behind spooky folklore figures. Few of these are as widely-recognized as the headless horseman. While most people today know him as the ghostly figure popularized by American author Washington Irving in his short story, The Legend of Sleepy Hollow, the headless horseman’s origins can be traced back to a time long before the United States existed.
In the 12th Century dinnseanchas of Magh Slécht, a text explaining the mythology and history of the Magh Slécht plain in ancient Ireland, several stories appear about a ghastly figure named Crom Cruach. This pagan god of pre-Christian Ireland is thought to have been a fertility god who demanded human sacrifice and preferred his victims to be decapitated (though it’s unclear how much of this negative image comes from the propaganda of early Christian conquerors). When Christians took over Ireland beginning in the Sixth Century, worship of Crom Cruach was forcefully stopped. Over time, however, Crom Cruach transformed, via stories and folk tales, into a similar figure called Crom Dubh. According to myth, Crom Dubh, angry that humans were no longer worshipping or sacrificing to him, took on a terrifying physical form with which to collect human souls. This new mythological creature became known as the Dullahan. Dullahans are said to appear to mortals as decapitated horseback riders, carrying their own rotting heads under their arms and using human spines as whips. According to mythology, wherever a Dullahan stops, a mortal dies. Dullahans are sometimes depicted riding horses that are also headless, or pulling coaches adorned with tombstones. Since all gates and doors magically fly open to allow Dullahans inside, the only defense against them is precious metal, particularly gold, which they are terrified of for unknown reasons.
By the time Washington Irving published The Legend of Sleepy Hollow in 1820, the tale of the Dullahan had inspired other tales of headless ghosts throughout Europe. Irving wrote his short story while visiting England, leading some historians to believe that he was inspired by such a tale. Others believe that, since Irving was friends with Sir Walter Scott, his story may have been inspired by Scott’s The Chase, an English translation of a German poem about a hunter doomed to be chased forever by the devil’s hellhounds. Either way, Irving’s ghostly tale touched such a nerve with the American public that popular culture remembers it to this day. In The Legend of Sleepy Hollow, a superstitious man named Ichabod Crane moves to the small New York village of Sleepy Hollow to take on the job of schoolmaster. He begins vying for the hand of 18-year-old Katrina Van Tassal, whose father is a wealthy farmer. However, a strong and boisterous local man, Abraham “Brom Bones” Van Brunt, also wants to marry Katrina. One night, Crane attends a harvest party at the Van Tassel residence, and is frightened by ghost stories told by Brom Bones and others. After the party, while making his way home through the forest on horseback, Crane encounters none other than the headless horseman himself, cloaked and with his own head resting on his saddle. The famed ghost is said to be the spirit of a Hessian soldier, a German soldier hired by the British to fight in the Revolutionary war. Crane is chased through the forest until the headless horseman hurls his own head at him, knocking Crane off his saddle. Whether Crane survived is left open to interpretation, but the story implies that the headless horseman might have just been Brom Bones in disguise.
The headless horseman has been appearing in popular media ever since The Legend of Sleepy Hollow was published. In 1949, Disney released their own animated version of Irving’s tale, complete with narration and a song by Bing Crosby. 1999’s Sleepy Hollow, starring Johnny Depp, is a murder mystery with the headless horseman as the main suspect. Today, the real village of Sleepy Hollow is a major tourist attraction during October, with plenty of haunted tours allowing visitors to catch a glimpse of their most famous spectral resident. A ghost has to earn his keep somehow.
[Image description: The Headless Horseman Pursuing Ichabod Crane by John Quidor, a painting showing the headless horseman, chasing Ichabod Crane on horseback through a forest while holding a pumpkin in the air.] Credit & copyright: Public Domain