No thanks
Continue
Whoops!
Your free trial of Curious+ has expired
Person, Place, or Thing
Our encyclopedia of the odd and awe-inspiring.
Previous Next
September 5, 2021
1 CQ
Place: Lake Tahoe 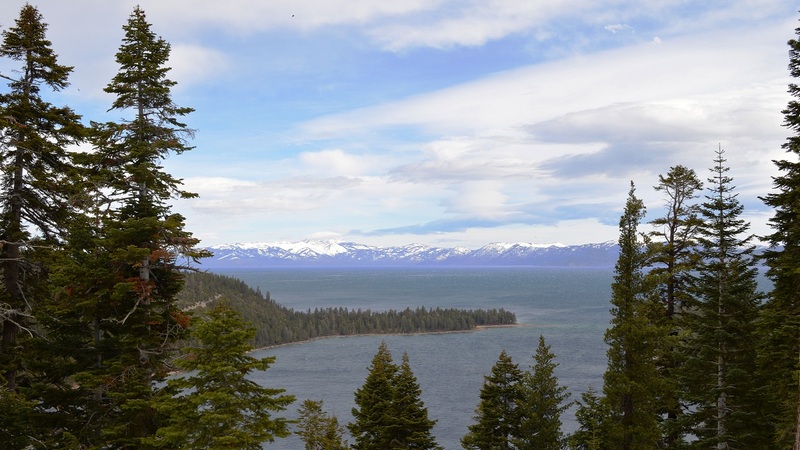 With the ongoing Calder Fire inching closer to Lake Tahoe, the future of this unique natural landmark is undoubtedly in jeopardy. As jarring photos of burning trees and ski resorts continue to roll in, many are reflecting on what it is that makes Lake Tahoe such a special place.
Nestled in the Sierra Nevada mountains at a height of 6, 225 feet, straddling the state line between California and Nevada, Lake Tahoe is North America’s largest alpine lake. Its famously-clear waters are over 1,600 feet deep, making it deeper than the Empire State Building is tall. This impressive depth is a result of how the lake was formed over 2 million years ago, when a fault line on the continental and oceanic plates collapsed, creating the Lake Tahoe Basin and surrounding mountains. The basin was then scoured by glaciers, making it deeper, and sediment from an ancient volcanic eruption created a natural dam, allowing water to gather there. Lake Tahoe’s depth also prevents its waters from freezing completely, even though they remain cool throughout the year. This is because large volumes of water retain a lot of heat relative to their surface area, and would thus require incredibly low temperatures in order to freeze.
Long before Lake Tahoe became a worldwide tourist attraction with 15 million visitors per year, it was home to the Washoe people. This Native American Tribe lived throughout the Great Basin, with Lake Tahoe serving as the center of their territory. The Washoe people considered several sites in Lake Tahoe to be sacred, including Cave Rock, a cave and rock formation on the lake’s southeastern shore which was unfortunately blasted away, in 1931, due to highway construction.
Surprisingly, Lake Tahoe’s name was a subject of debate for some time. In 1844, explorer John C. Frémont named it Lake Bonpland after famed botanist Jacques Alexandre Bonpland. The name didn’t stick, however, and a few years later another explorer, John Calhoun Johnson, named it Lake Bigler after John Bigler, California’s governor at the time. However, when Bigler became an unpopular figure during the Civil War with both the union and the confederacy, several new names for the lake sprang up, including Mountain Lake and Maheon Lake. Finally, in 1862, federal mapmaker William Henry Knight asked his colleague, Dr. Henry DeGroot, to give the lake an official name. DeGroot chose Tahoe. The word was a mispronunciation of the Washoe word “da'aw”, which means “lake.” Nevertheless, Knight began printing it on all official U.S. maps, saying, “...I thought now would be a good time to select an appropriate name and fix it forever on that beautiful sheet of water.”
Today, Lake Tahoe’s stunning scenery, including mountains, tall pine trees and large boulders, make it a very instagram-worthy vacation spot. Wildlife enthusiasts enjoy the black bears, mountain lions and other impressive wildlife roaming free in Lake Tahoe State Park, which also allows for camping and scenic hikes. There are at least 15 ski resorts surrounding Lake Tahoe, making it a popular winter getaway. In fact, most of Lake Tahoe’s tourism revolves around skiing and other winter sports. On the Nevada side of the area, where gambling is legal, casinos are another popular attraction. Unfortunately, several of Lake Tahoe’s ski resorts, such as the popular Heavenly Mountain Resort, have already sustained damage in the Caldor Fire. Resorts’ snow machines are being used to fight the blaze, while evacuations have been ordered for many Lake Tahoe residents. Only time will tell how much damage the Lake Tahoe area may sustain, in the blaze. Hopefully, this beautiful area will remain unscorched for future visitors to enjoy.
[Image description: Lake Tahoe’s Emerald Bay under a blue sky with pine trees in the foreground] Credit & copyright: Blake Everett/Public Domain