No thanks
Continue
Whoops!
Your free trial of Curious+ has expired
Person, Place, or Thing
Our encyclopedia of the odd and awe-inspiring.
Previous Next
August 15, 2021
1 CQ
Person: Charlemagne 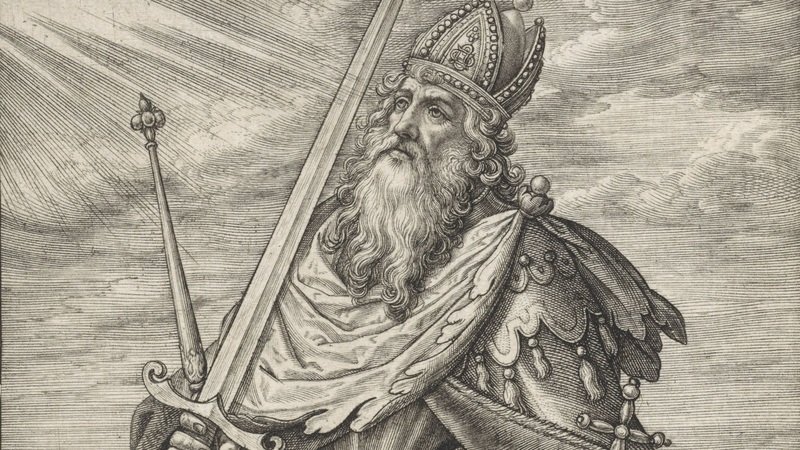 He certainly had fashion sense (or not, depending on who was depicting him) but finery isn’t what made Charlemagne famous. This European ruler had plenty of titles and military victories to his name, though his army was defeated in the Battle of Roncevaux Pass on this day in 778. Sometimes called the “Father of Europe”, Charlemagne united Western Europe for the first time since the classical era. Of course, his rule wasn’t appreciated by everyone, particularly the peoples he conquered and forced to convert to Christianity.
Born around 742, Charlemagne, or Chalres I, was the eldest son of Pepin the Short, who ruled as King of the Franks from 751 to 768. Franks were a Germanic-speaking people who had invaded and taken over the Western Roman Empire during the 5th Century. By the time Charlemagne was born, the Franks already ruled present-day northern France, Belgium, and western Germany. Upon his father’s death in 768, Charlemagne found himself ruling alongside his younger brother, Carloman I. Problems between the two developed immediately. Aquitaine, a region in present-day southwestern France which the brothers ruled, broke into rebellion upon Pepin the Short’s death. In a display of his soon-to-be-famous decisive military tactics, Charlemagne sent his army to crush the rebellion. However, in a fairly clear effort to undermine Charlemagne’s authority, Carloman sent his own army to assist. Instead, the two armies embarrassingly clashed. Eventually, Carloman’s army withdrew, Charlemagne’s army went on to quash the rebellion, and Carloman was publicly disgraced. By 771, the brothers were fighting on a near-constant basis, but Carloman passed away due to unknown natural causes that same year, granting Charlemagne the sole power of King.
Charlemagne immediately made his ambitions known. First, he wanted to unite all Germanic peoples into a single kingdom. Second, he wanted to convert all of his subjects to Christianity, a tall order since many of those he wished to conquer were pagan or Muslim. His military campaigns, which would last for nearly the entirety of his reign, began with his conquering of the Lombards, in present-day northern Italy. More difficult to subdue were the Avars in present-day Austria and Hungary, but Charlemagne managed to do it. Although his wealth and military might grew with each new region he conquered, Charlemagne’s army did suffer occasional setbacks. After they successfully invaded the Iberian Peninsula and subdued most of the Basques who lived there, in 778, they were unexpectedly ambushed on a mountain pass in the Pyrenees. The Battle of Roncevaux Pass saw the death of Roland, Charlemagne’s good friend and commander of his army’s rearguard.
Charlemagne’s most infamous military campaign was the Saxon Wars, waged against the Saxons of present-day Germany. In 772, Charlemagne’s army destroyed a Saxon Irminsul, in present-day Bavaria. Irminsuls, or “great pillars”, were sacred objects in Saxon Paganism. It’s destruction led to an uprising and the start of Charlemagne’s three-decade-long war against the four Saxon regions: Westphalia, Eastphalia, Engria and Nordalbingia. Although greatly outnumbered, the Saxons put up a fierce fight under their main military leader, Widukind, about whom little is still known.
782 saw the bloodiest single event in the Saxon Wars. After subduing a Saxon rebellion in present day Verden, Germany and forcing the rebels’ surrender, Charlemagne had every rebel, around 4,500 people, publicly executed. The aptly-named Verden Massacre represented the turning point in the Saxon Wars. In 785, Widukind was captured and forced into baptism. Meanwhile, Charlemagne’s power was only growing. In 800, He was crowned Emperor of the Romans (or Holy Roman Emperor) by Pope Leo III. The Saxon Wars ended in 804, with the Saxons losing much of their lands and their right to practice paganism.
For a man known for leading military expeditions and carrying a sword everywhere he went, Charlemagne’s death from a nosebleed, in 814, was surprisingly non-violent. He was canonized (posthumously made into a saint) in 1165, but the modern Catholic church doesn’t recognize his sainthood. Instead, Charlemagne is remembered as a shrewd military strategist and a figure whose rule changed Europe forever. Of course, whether it was changed for the better depends on who you ask.
[Image description: A black and white illustration of Charlemagne holding a sword and staff while looking toward the sun.] Credit & copyright: Rijksmuseum/Public Domain