No thanks
Continue
Whoops!
Your free trial of Curious+ has expired
Person, Place, or Thing
Our encyclopedia of the odd and awe-inspiring.
Previous Next
August 1, 2021
1 CQ
Thing: Hot dogs 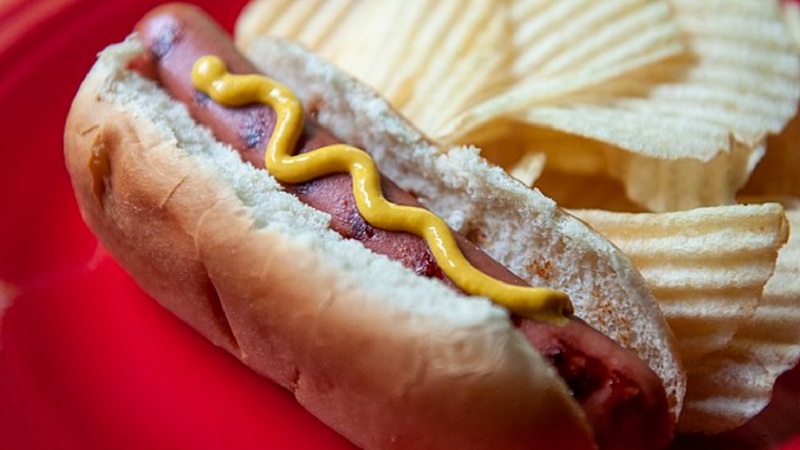 It’s just not summer without a hot dog! This easy-to-make, ultra-portable food has inspired much love and even some debate over the years, and not just in regard to which toppings are best! So grab some ketchup, mustard, relish, chili and whatever else you’d like and read on for a brief history of the American hot dog.
Sausages made from minced meat and seasonings encased in animal intestines or skin have been around for thousands of years. The hot dog’s closest ancestor is the German pork sausage, which originated in 13th Century Frankfurt. In fact, the hot dog nickname “frankfurter” is a nod to its origins. Some food historians believe that in the 18th Century, a butcher named Johann Georg Lahner brought pork sausage from Frankfurt to Vienna, Austria, where he popularized it and added beef to the mixture. Another common hot dog nickname, “wiener”, is a reference to Vienna, or Wién, in German.
The exact circumstances under which the German sausage transformed into the American hot dog are debated, with different stories often thrown around. Some say that in 1880, a German immigrant named Antoine Feuchtwanger began selling sausages in rolls in St. Louis, Missouri, so that customers could eat them on the go. Others say that Feuchtwanger began selling the first sausage-bun combos at the World’s Fair, either in 1893 or 1904. The most popular story, though, centers around Coney Island. The claim is that German-American restaurateur Charles Feltman began selling sausages in buns from a cart on Coney Island, calling them “Coney Island Red Hots”. His food became popular enough for him to build a permanent restaurant in 1871, Feltman’s Ocean Pavilion. By the early 1900s, not only was it the most popular attraction on Coney Island, it was an empire unto itself, covering a full city block with nine individual restaurants, a carousel, an outdoor theatre, and more. Whether or not Feltman actually invented hot dogs, he undisputedly popularized them...and added “hot” to their name!
So, what about the “dog” part of hot dogs? Unfortunately, it may have something to do with nationalism and anti-immigrant sentiment. Because dog meat was eaten until the 20th Century in some German states, like Bavaria and Saxony, “hot dog” may have been a loaded term used by Americans to imply that German immigrants were selling sausages made from dog meat. A similar theory about nationalism involves sports cartoonist T.A. Dorgan, who drew offensive cartoons of German immigrants as dachshunds, but labeled them “hot dogs”, since he couldn’t spell the former word. Dorgan also took frequent stabs at the Coney Island Red Hots sold at Feltman’s Ocean Pavillion on Coney Island, implying they were made from dog meat. This caused such a stir that, in 1913, the words “hot dog” were banned from signs on Coney Island by the Chamber of Commerce. The move actually angered some hot dog sellers, who had begun using the term as a tongue-in-cheek joke. Eventually, the ban was lifted and dachshunds became popular mascots at many hot dog stands around the country.
It wasn’t the last time that hot dogs were embroiled in controversy, though. In the 1930s, as industrial farming techniques progressed and “skinless” hot dogs (those without natural skin or intestine casings) grew in popularity, so did the public’s wariness about the contents of their “dogs.” Some newspapers claimed that hot dogs were commonly made with leftover cow and pig parts, such as snouts and eyeballs. These claims were never proven and historians generally believe that they were simply a ploy to sell more papers. Squeamishness about hot dog production continues in some quarters even today, with fears about ingredients fueled by internet hoaxes. In reality, hot dogs are made from leftovers, but not from parts like eyeballs. Instead, trimmings of meat which don’t make good steaks or roasts (due to their fat content of texture) are typically used. Hey, as long as it's properly roasted and covered in ketchup, you won’t find us complaining!
[Image description: A close up photo of a hot dog with mustard and potato chips.] Credit & copyright: ACES/Janet Guynn/Alabama Extension/Public Domain