No thanks
Continue
Whoops!
Your free trial of Curious+ has expired
Person, Place, or Thing
Our encyclopedia of the odd and awe-inspiring.
Previous Next
June 25, 2021
1 CQ
FLASHBACK | Thing: Mattachine Society 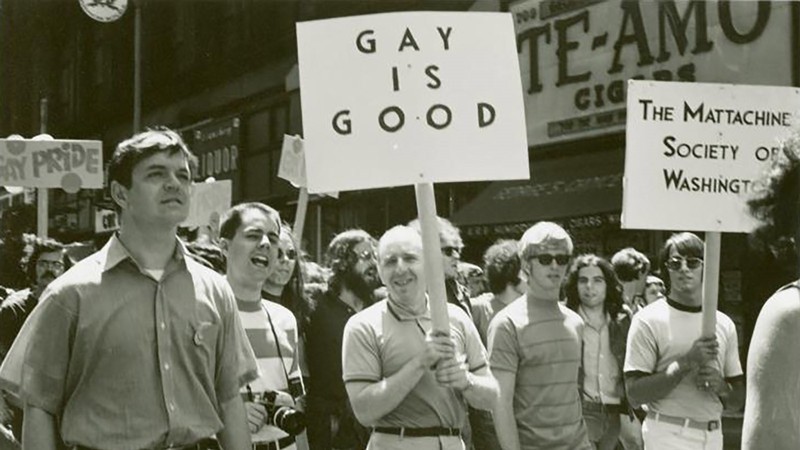 It's Flashback Friday! Enjoy this favorite from the Curio Cabinet archives. The first national gay rights group.
Before Stonewall, before Marriage Equality, and before Gay Pride marches, there was the Mattachine Society. In an era of fervid homophobia, the group managed to unite gay individuals to collectively demand their due rights. In celebration of Pride month, we're learning how the pioneering group brought the fight for LGBTQ rights from the streets—to the courtroom.
To get to the origins of the Mattachine Society's inception, we have to go back to Los Angeles in 1948—to the youth of activist Henry Hay. Surviving on unsteady jobs, he had agreed to participate in interviews for Doctor Alfred Kinsey's Sexual Behavior in the Human Male, a book released that year which delved into the unforeseen nuances of human sexuality. It was a revelation to those who were homosexual that they had significant numbers in the millions living in America, and were definitely not alone.
At the same time, police were ramping up arrests and fines for "vagrancy-lewdness" which were used to harass people accused of homosexual acts. Hay, armed with Kinsey's statistics, made attempts to organize his gay friends and acquaintances into some sort of political action group to fight back. In 1950, he finally articulated what no one else could, that homosexuals were "an oppressed cultural minority." The following year, Hay gathered like-minded individuals into a group named the Mattachine Society, after the French Renaissance secret fraternity who would appear in public dressed in masks and use satire to speak truth to power.
The society's first test came in February of 1952 with the trial of member Dale Jennings. According to his testimony, Jennings was followed one night by a thuggish-looking man who kept making awkward advances at him. When the man let himself into Jennings apartment, he proceeded to harass Jennings until handcuffing and arresting him. Jennings was expected to plead guilty to his charges, pay a fine, and discreetly return to his life—as was often the case when men were charged with violating vag-lewd laws. Instead, Jennings called Hay, who posted his $50 bail and encouraged him to fight in court.
What came next was an unprecedented turn of events: the Mattachine Society called on donors across the country to help fund Jennings' legal expenses. In the ensuing jury trial, Jennings openly admitted he was a homosexual, but denounced the charges as a form of sexual entrapment that violated the Fifth Amendment. The trial went on for three days, with Jennings' lawyer arguing "homosexuality and lasciviousness are not the same thing." In the end, the jury was deadlocked with 11 finding Jennings innocent, and the chairman of the jury dissenting. The city attorney refused to continue prosecuting the case and moved for a dismissal, which the judge granted. It was the first time anyone had admitted they were homosexual and been exonerated of a vag-lewd case in California.
With the news of Jennings' trial making its way across the nation, Mattachine Society chapters were started in a number of cities. At their peak, 27 groups took on the name and the causes. Unfortunately, the organization collapsed after its leaders were accused of communism by the House Un-American Activities Committee, and a number of conventions failed to address the central goals of the organization: were they focused on radical political organization, or integrating the more conservative and high-minded gays into normal American society? By the '70s, Mattachine was no more, but other movements arose to take its place: the Compton Cafeteria riots in San Francisco, the Stonewall Inn riots in New York, and the first Gay Pride Parade in June of 1970. These movements built on the society's hard-learned lessons in solidarity, self-actualization, and jurisprudence to lead the charge for future generations. Today, We're honoring the society, its successors, and the LGBTQ individuals who stood up and protested against police and state violence directed at them.
Image credit & copyright: Kay Tobin / New York Public Library