No thanks
Continue
Whoops!
Your free trial of Curious+ has expired
Person, Place, or Thing
Our encyclopedia of the odd and awe-inspiring.
Previous Next
April 11, 2021
1 CQ
Person: Chang-rae Lee 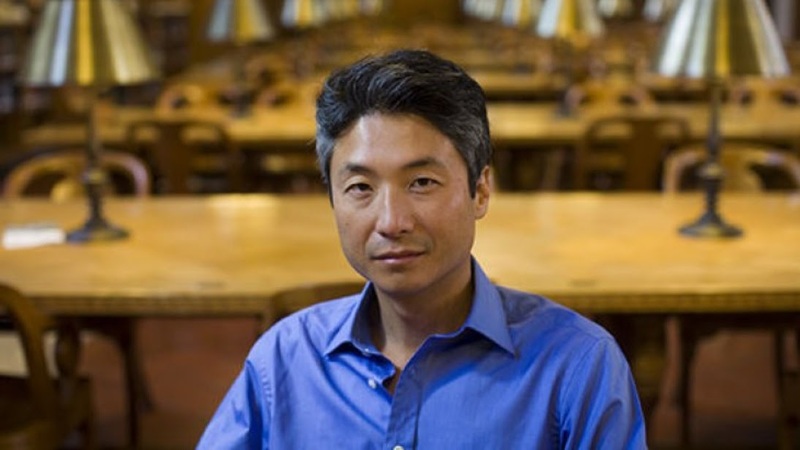 It takes quite an author to successfully release a novel about travel during lockdown! Then again, bestselling Korean-American author Chang-rae Lee is known for his bold writing choices. Unlike the dystopian novel Lee released in 2014, My Year Abroad, released February 2, 2021, is so optimistic that the New York Times Book Review called it “a manifesto to happiness.”
Born July 29, 1965, in South Korea, Lee’s family immigrated to the United States when he was three years old. Although he earned a B.A. in English from Yale University in 1987, it wasn’t immediately clear to Lee or his family if he would choose to write professionally. In fact, following his graduation, he took a job on Wall Street as an equities analyst. It wasn’t until a year later that Lee decided the finance world wasn’t for him, and began working toward his Masters of Fine Arts degree in writing at the University of Oregon. The manuscript he’d been writing in his spare time became his thesis, and would eventually transform into his first novel, Native Speaker, in 1995. Realizing his passion for teaching, Lee became an assistant professor of creative writing at the very university he’d just graduated from. Over the following years, Lee would hold teaching positions at several universities, including Stanford and Princeton.
Lee’s novels often explore issues of identity and belonging, especially relating to the experiences of Asian-Americans. Lee’s first book, Native Speaker, focuses on the internal struggle of a young Korean-American man who is hired to ruin the reputation of a Korean-American politician in New York City. In A Gesture Life, released in 1999, an ethnically-Korean man, who was adopted by a Japanese family and served in the Japanese army, deals with haunting memories and struggles to break out of his routine in order to reconnect with his estranged adopted daughter. 2004’s Aloft features Lee’s first non-Asian-American protagonist, an Italian-American retiree who is forced to grapple with the fact that his life and family aren’t as perfect as he had always supposed. Lee’s 2011 novel The Surrendered, which was nominated for a Pulitzer Prize, tells the story of three characters who survived the Korean war and are reunited years later. On Such a Full Sea, published in 2014, takes place in a dystopian future-Baltimore. It’s Chinese-American protagonist works a dangerous job as a diver at a fish farm.
While many of Lee’s books focus on older characters, 2021’s My Year Abroad stars a young college student named Tiller, who describes himself as “twelve and one-half percent Asian.” Unlike the older, world-weary protagonists of Lee’s most famous novels, Tiller is portrayed as ordinary and relatively unremarkable. However, when Chinese-American business mogul Pong Lou brings Tiller along on a trip across Asia, a range of wild experiences open Tiller’s eyes to the wider world. Tiller also finds that, although his ethnicity causes him some difficulty fitting in, in the U.S., he is also considered foreign in Asia, leading him to question where he truly belongs. In an interview with NPR, Lee described My Year Abroad as a subversion of the typical American story, where a white protagonist travels abroad to expand their horizons. “We all know that story, of course. And it's essentially a colonial story. And I think we're all done with that story. And what we want is to find out a little bit more about ourselves, as we always do, as peoples everywhere do. But the ways in which we get that story isn't as easy and simple as it's been told to us before,” he explained.
My Year Abroad has already garnered praise from critics, many of whom see the novel as a lampooning of capitalism as well as an exploration of identity. As Tiller faces increasingly bizarre situations on his trip, sometimes fueled by expensive alcohol or drugs, the novel makes it clear that luxuries don’t always equate to a great time, and there is such a thing as too much excess. Readers who have been stuck at home for the past year, however, may well find My Year Abroad's wacky misadventures in far-flung locales a welcome break from the COVID-19 blues.
[Image description: Author Chang-rae Lee, wearing a blue shirt, sits at a table in an otherwise empty library.] Credit & copyright: Penguin Random House
Written by: Maria C.

More about this Curio:
The New Yorker: "Chang-rae Lee Lets Loose in “My Year Abroad”."
NPR: "Overflowing 'Year Abroad' Is A Travelogue, A Coming-Of-Age Tale And A Mafia Thriller."
Stanford English: "Chang-rae Lee."