No thanks
Continue
Whoops!
Your free trial of Curious+ has expired
Person, Place, or Thing
Our encyclopedia of the odd and awe-inspiring.
Previous Next
March 28, 2021
1 CQ
Thing: Three Mile Island Nuclear Accident 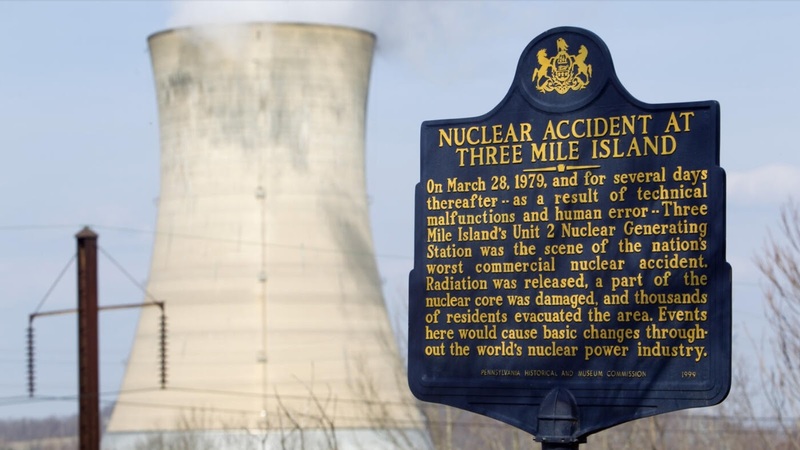 It's the most famous nuclear accident you have never heard of. On this day in 1979, the Three Mile Island Nuclear Generating Station near Harrisburg Pennsylvania had a partial meltdown. Although no lives were lost as a direct result of the accident, its repercussions are still felt in the American power industry. In fact, many credit the accident for destroying Americans' confidence in nuclear power.
The purpose of nuclear generating stations, also known as nuclear power plants, is to create electricity. To do this, a nuclear reactor, containing a nuclear core, creates a fission nuclear chain reaction, turning uranian fuel into other radioactive materials. This process produces heat, which creates steam. The steam spins a turbine, making electrical power. Excess heat is wafted away through large cooling towers. However, in core melt accidents, commonly known as nuclear meltdowns, overheating damages a power plant's nuclear core, causing it to melt and release uranium and other radioactive materials into the atmosphere.
The Three Mile Island nuclear accident began at 4 a.m. on March 28, 1979, when a pressure valve in one of the station's two nuclear reactors, the Unit-2 reactor, failed to close properly. Radiation-contaminated water leaked out of the valve, and without enough water to cool it down, the station's nuclear core overheated. Emergency water pumps began operating in response to the excess heat, but human error intervened. Confusing readings in the plant's control room caused operators to shut off the emergency pumps. They believed that there was too much water near the reactor, causing excess steam. The pump-shutoff caused more heat damage to the nuclear core, and within a few hours it had heated to over 4,000 degrees, around 1,000 degrees shy of a full meltdown.
By 8 a.m, radioactive gas had leaked throughout the station. The media took notice of the station's locked-down state, and rumors began to spread, despite insistence from the nuclear station's parent company that the incident was harmless to the public. Meanwhile, the station's core continued to dangerously overheat. It wasn't until 8 p.m. that the emergency water pumps were restarted and the core began to cool. Later, inspectors found that the Unit-2 core had come within about an hour of a full meltdown, which would have spread radioactive material through the atmosphere for miles.
The station's problems were just beginning. On March 30, a bubble of flammable hydrogen gas, leftover from the incident, was discovered in the reactor building. Inspectors realized that small, unnoticed gas explosions had been taking place, releasing radiation into the outside atmosphere—and no one was sure if more or larger explosions would follow. Pennsylvania Governor Dick Thornburgh ordered most residents to stay indoors, and announced that pregnant women and small children within a five-mile radius should evacuate. Panic ensued. Because the Three Mile Island station was located on the Susquehanna River, fears about drinking water safety ran rampant. Around 100,000 people fled the area.
It took a visit from the U.S. President to calm the public's nerves. President Jimmy Carter was a trained nuclear engineer. After visiting the Three Mile Island station and conferring with other experts, Carter announced that he didn't believe widespread radiation poisoning was likely. Station operators drained away the hydrogen from the reactor building, and surrounding residents returned to their homes. Although inspections showed that no one outside the station was exposed to harmful levels of radiation, the accident had spawned negative press that wasn't easy to bounce back from. In fact, the entire nuclear power industry faced setbacks, as a result of the Three Mile Island accident.
Of the 129 nuclear power plants that had been approved throughout the U.S., at the time of the Three Mile Island accident, only 53 were completed. Stricter Federal requirements for nuclear facilities were implemented, and citizens across the country balked at the idea of nuclear facilities being built near their homes. No new U.S. power plants were ordered for construction, after the Three Mile Island accident, until 2012. As for the Three Mile Island station itself, it's Unit-2 reactor was deemed too damaged to continue operating. It's Unit-1 reactor didn't begin operating again until 1985, but still runs today. Nearby, a historical plaque explaining the accident stands as a reminder of how significant the events at Three Mile Island were...and how much worse things could have been.
[Image description: A plaque stands in front of a cooling tower at the Three Mile Island Nuclear Generating Station.] Credit & copyright: History.com
Written by: Maria C.