No thanks
Continue
Whoops!
Your free trial of Curious+ has expired
Person, Place, or Thing
Our encyclopedia of the odd and awe-inspiring.
Previous Next
January 31, 2021
1 CQ
Person: A.A. Milne 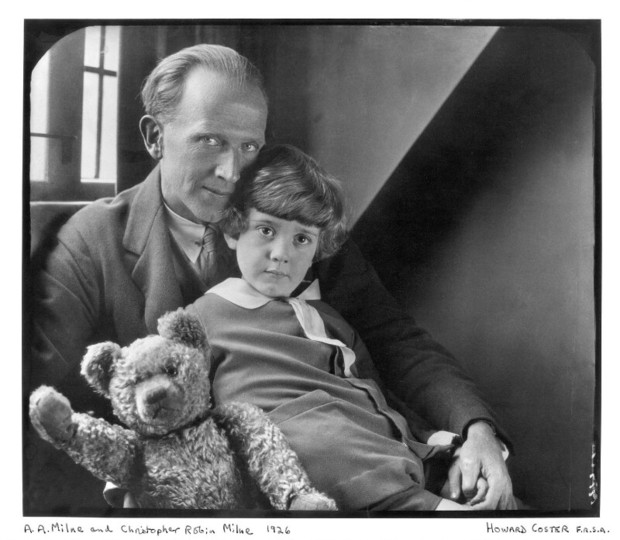 Move over, Harry Potter. Step back, Star Wars. There's another multi-million dollar franchise full of colorful characters in town. Actually, it's been here far longer! First created in 1926, Winnie-the-Pooh is still generating new adaptations, from cartoons and movies to toys. The entire phenomenon began with one man: British author A.A. Milne, who passed away on this day in 1956. However, Milne had never set out to create some of the most beloved characters of all time. He had simply been looking for stories to tell his young, toy-loving son, Christopher Robin.
Born in Kilburn, London, Alan Alexander Milne attended the Henley House School, which was run by his father. Interestingly, one of Milne's instructors at Henley House was the famous author H.G. Wells. Wells was a great inspiration to Milne, but not in the subject of writing. At the time, Wells was not a published writer but a mathematics teacher. Milne went on to study at Trinity College, Cambridge on scholarship. During his studies Milne played cricket with other future authors, including J.M. Barrie (creator of Peter Pan), and Arthur Conan Doyle (creator of Sherlock Holmes). These friendships helped spark Milne's interest in writing, and, along with his brother Kenneth, he published and edited in the student magazine Granta. After graduation, he contributed to Punch magazine and later became an assistant editor for the publication.
Milne served as a second lieutenant during the Great War. Disillusioned by the suffering he witnessed, and endured, Milne sought solace in his family and writing. He bought a country home in Sussex and, in 1913, married Dorothy "Daphne" de Sélincourt. The couple had a son, Christopher Robin Milne, in 1920. Miline began writing plays, some of which were well-received, such as Mr. Pim Passes By and The Dover Road. In 1924, Milne wrote his first book of children's poems, When We Were Young. Some of these poems were inspired by Christopher Robin's childhood pastimes, and, in 1926, Milne channeled that inspiration into the first of two books that would define his life (and the life of his son). Winnie-the-Pooh was a collection of stories about a fictionalized version of Christopher Robin and his (stuffed) animal companions. The main animal character was Winnie-the-Pooh, an absentminded bear whose name was inspired by Winnipeg, a black bear living at the London Zoo . Whimsical illustrations from artist Ernest H. Shepard helped make the book an instant hit. By the time Miline published The House at Pooh Corner (1928), he had become a household name.
Unfortunately, the young Christopher Robin had also become famous. Throughout his adolescence, Milne's son endured bullying from both children and adults, who often expected him to be cuter and more cheerful than he actually was. Ultimately, Winnie-the-Pooh strained the relationship between Milne and his son. The pair became largely estranged when, as a grown man, Christopher Robin chose to marry his first cousin, Lesley de Sélincourt. Only after Milne's death, in 1956, did Christopher Robin write a book of his own, The Enchanted Places, about his unusual childhood. He later stated that the book lifted him "from under the shadow of my father and of Christopher Robin, and to my surprise and pleasure I found myself standing beside them in the sunshine able to look them both in the eye."
For almost one hundred years, the characters from Milne's Winnie-the-Pooh books have inspired generations of children. In 1961, pioneering businessman Walt Disney gained licensing rights to Milne's characters, and the Walt Disney Company has since created several series of cartoons, a live-action T.V. show, and even amusement park ride based on Milne's works. In 2017, they even created a successful live-action Winnie-the-Pooh movie. It seems increasingly clear that no matter how advanced or fast-paced the modern world becomes, the simple lessons and lighthearted stories from Milne's Winnie-the-Pooh will continue to endure.
Image credit & copyright: National Portrait Gallery, London
Written by: Maria C.

More about this Curio:
Biography: "A.A. Milne Biography (1882–1956)."
Interesting Literature: "Guest Blog: Five Fascinating Facts about A. A. Milne."
World Literature Today: "A.A. Milne: Six Facts You Might Not Know About the Man Behind Winnie-the-Pooh."