No thanks
Continue
Whoops!
Your free trial of Curious+ has expired
Person, Place, or Thing
Our encyclopedia of the odd and awe-inspiring.
Previous Next
December 6, 2020
1 CQ
Person: Andrea Palladio 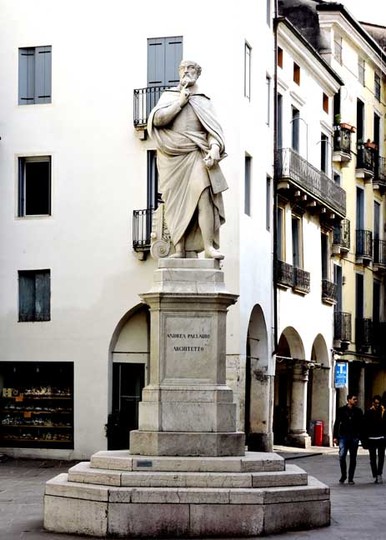 Italy just wouldn't be the same without the influence of 16th century architect Andrea Palladio. As a student of ancient Roman and Greek culture, Palladio reimagined the cities of Vicenza and Veneto (Venice) by emphasizing practical and well-proportioned architecture. From small villas to courts and churches, no space was too great or too small for the man who started life as a humble stonecutter and completely redefined Italian architecture—with the help of friends in high places.
Born Andrea di Pietro della Gondola on November 30, 1508, in Padua, Venice, Palladio grew up around buildings. At age 13, the boy was sent to apprentice with Bartolomeo Cavazza de Sossano, a sculptor with a notoriously harsh streak. Six years later, Palladio moved to Vicenza where he joined a stonemason guild and crafted decorative sculptures.
Palladio's first big break came in 1538, when at the age of 30, he was asked to rebuild the Villa Trissino a Cricoli for the poet Gian Giorgio Trissino. His friendship with Trissino was akin to a second apprenticeship. Trissino travelled with Palladio to Rome, and encouraged him to study classical monuments. Under Trissino's tutelage, Palladio became an architect. Trissino also bestowed the nickname "Palladio," meaning of or relating to Pallas. (In ancient mythology, Pallas is an epithet of Athena, the goddess of wisdom.) When Palladio redesigned the Villa Trissino, he emphasized balanced room proportions, columnar accents, and a south-facing facade to always face the sunlight.
After completing the renovations, Palladio began receiving other requests for villa redesigns. By 1546, Vicenza's city government commissioned him to work on the dual level Gothic palace at the center of the city. Palladio added a marble facade with a loggia—a covered gallery with a series of arches or columns that is open to the elements. He also added a portico or classical patio. Palladio renamed the palace the Basilica after the ancient Roman public center. One of Palladio's finest achievements, the building was completed after his death (1617) and renamed the Basilica Palladiana in his honor.
When Gian Giorgio Trissino died in 1550 it devastated Palladio, and left him without a patron. Many Venetian aristocrats clamored over themselves to support Palladio. Ultimately, he selected Daniele Barbaro as his new patron. Barbaro encouraged Palladio to write books on classical architecture entitled I quattro libri dell'architettura or The Four Books of Architecture, a collection hailed as a masterpiece, and evidence of Palladio's role as the greatest living architect in Europe at the time. During this period, Palladio began designing churches across northern Italy. At the Tempietto Barbaro, Palladio designed a floor plan that combined the popular Renaissance dome with a Greek cross shape—indicative of the sacred nature of the space.
When Andrea Palladio died in 1580, he left behind an impressive body of work that heavily influenced generations to come: particularly American architects. The first U.S. Capitol Building design by Thomas Thornton featured Basilica-like loggia doors and columns. When Thomas Dawes rebuilt Harvard Hall at Harvard University in 1766, he employed a neo-Palladino style. And lastly, Thomas Jefferson's Monticello plantation was designed by William Thorton, who modeled it after Palladio's Villa La Rotunda. While Andrea Palladino isn't officially an American Founding Father, he sure did leave his mark all over the early buildings in the U.S.!
See the Villa Barbaro:
Hear modern architects describe Palladio's enduring influence in this Royal Academy of Arts series:
Image credit & copyright: Monument to Palladio" Statue By Vincenzo Gajassi in 1859, Venice, Italy
Written by: Esther P.


More about this Curio:
Artsy: "Andrea Palladio."
The New Yorker: "All He Surveyed."
UNESCO: "City of Vicenza and the Palladian Villas of the Veneto."