No thanks
Continue
Whoops!
Your free trial of Curious+ has expired
Person, Place, or Thing
Our encyclopedia of the odd and awe-inspiring.
Previous Next
November 1, 2020
1 CQ
Place: Arecibo Observatory 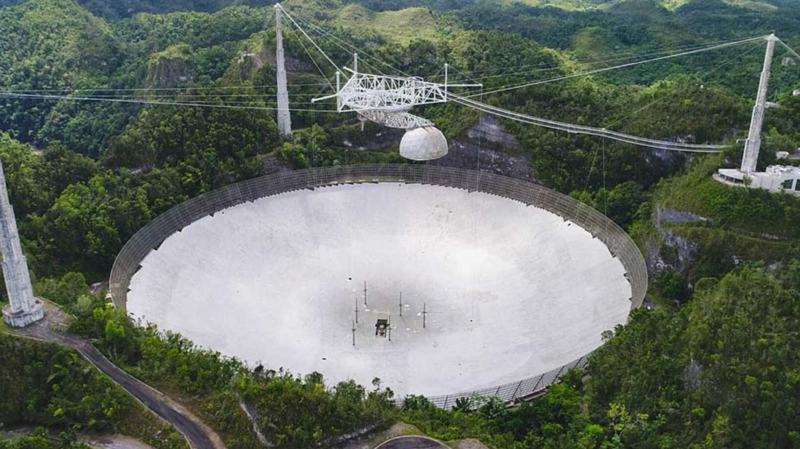 Sometimes, studying space requires BIG tools! The Arecibo Observatory, in Arecibo, Puerto Rico, was the world's largest single-aperture radio telescope for over 50 years (today it is surpassed only by China's Aperture Spherical Telescope). Shortly after it was built in 1963, the observatory became something of a pop culture icon, and was even featured in the James Bond film, Goldeneye. More importantly though, it opened up new avenues of study
The observatory was originally conceived in the 1950s as a way to detect ballistic missiles. However, by the time construction began in mid-1960, it was planned as a general-purpose observatory. Thanks to the project's enormous scale, construction took three years. When it was finished, the Arecibo Observatory had a 1000-foot spherical reflector made from 38,000 aluminum panels, a 100-foot telescope and a host of massive antennae. The aluminum panels focus incoming radio waves onto the antenna, which are capable of rotating in any direction, allowing celestial objects to be tracked even if they're moving.
The Arecibo Observatory is used in three main types of research: radio astronomy, the study of radio emissions from celestial objects, atmospheric science, the study of the atmospheric particles surrounding planetary bodies, and radar astronomy, the study of microwaves reflecting off celestial objects.
Due to the observatory's immense size, remote location, and delicate equipment, scientists must pass a rigorous application process to use it. Those granted the privilege have used the observatory to make some amazing discoveries. In 1964, a team of scientists led by American radio astronomer Gordon Pettengill discovered that the rotation period—the period it takes for it to complete a revolution around its axis—of Mercury was 88 days, not 59 days, as previously thought. In 1974, American scientists Russell Hulse and Joseph H. Taylor earned themselves Nobel Prizes in Physics when they used the observatory to discover the first binary pulsar, a magnetized, rotating, compact star with a binary companion, such as a white dwarf. In 1992, scientists discovered a new group of extrasolar planets, planets outside of earth's solar system, orbiting around pulsar B1257+12. The observatory was also used to map the surfaces of Venus and Mercury, for the first time in detail. In 2010, American astronomers Matthew Route and Aleksander Wolszczan were able to prove that brown dwarfs, celestial objects between the side of planets and stars, could have magnetic fields as strong as the Sun.
The Arecibo Observatory has weathered its fair share of damage over its 50-year lifespan. In 2017, high winds from Hurricane Maria broke an almost-100-foot antennae, which fell into the observatory's dish, damaging around 30 of its aluminum panels. Damage wasn't too severe, and the observatory remained mostly functional...until August, 2020, that is. For unknown reasons, an auxiliary cable, which supported a metal receiver platform, snapped. The cable's fall damaged panels in the observatory's dome and caused the platform it had once supported to twist. This left a 100-foot gash on the observatory's reflector dish. Repairs have already begun, but will likely take years.
The observatory still draws hundreds of visitors per year (when there isn't a pandemic) and is especially popular for local class trips. Though it may have seen a few rough years and lost its record as the largest radio observatory on earth, There's no denying that humans wouldn't know as much about the universe if not for its massive helping hand. See the damaged dome and plaform: Image credit & copyright: N/A
Written by: Maria C.