No thanks
Continue
Whoops!
Your free trial of Curious+ has expired
Person, Place, or Thing
Our encyclopedia of the odd and awe-inspiring.
Previous Next
October 25, 2020
1 CQ
Person: Pablo Picasso 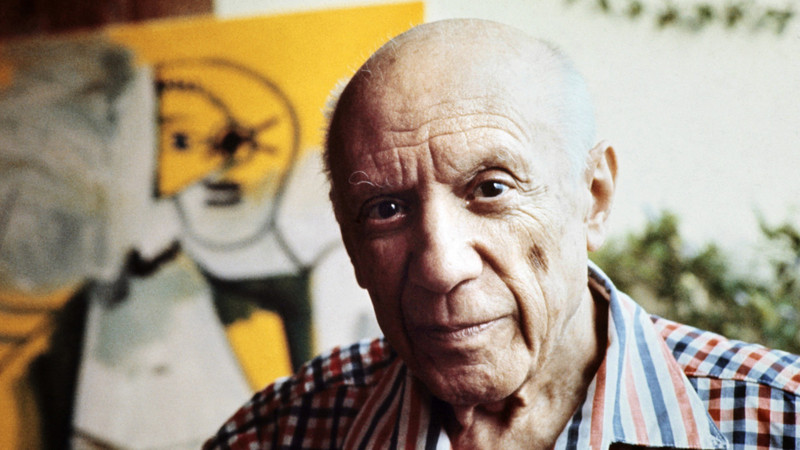 A cubist unraveled.
Many consider him the most important artist of the 20th Century, though others in his lifetime would ridicule and scorn his seemingly primitive style. Born on this day in 1881, Pablo Picasso helped invent a new cubist art style and became a larger-than-life public figure—in spite of his many personal struggles to develop a wholly unique artistic identity.
Picasso was born in Málaga, Spain, to a homemaker mother, María Picasso y López, and a painter father, Don José Ruiz y Blasco. By the time Picasso was seven, his father was training him to sketch and paint, and Picasso completed his first painting, Le Picador, at age nine. Picasso's mother even said that her son's first words were "piz piz", a shortened version of lápiz, or "pencil", in Spanish.
Picasso's family moved to Barcelona, when he was 13, and his father took a teaching job at the School of Fine Arts, and convinced school officials to let his son take an entrance exam, despite his age. Picasso got in, and just a few years later, at age 16, struck out on his own for Spain's most prestigious art school: Real Academia de Bellas Artes de San Fernando. There, his paintings began slipping from traditional realism into a modernism, in which striking colors and exaggerated features were meant to convey specific emotions.
At age 19, Picasso moved to Paris, rented an apartment with a friend, and co-founded a small magazine, contributing his artwork. In 1901, one of the most famous periods of Picasso's career—his "Blue Period"—began. Paintings he created during this four-year period were rendered in shades of blue and green with somber subjects, such as starving people. Picasso's own poverty greatly influence his Blue Period, as did the suicide of his friend, Carles Casagemas.
By 1907, Picasso shifted into his "Rose Period," marked by a use of warmer colors. He caught the eye of prominent art collectors, like Gertrude Stein, and art dealers, like Daniel-Henry Kahnweiler, who owned a gallery in Paris. Kahnweiler praised Picasso's work even as the artist's style became more experimental. In 1907, influenced by African artifacts and Iberian sculptures he had viewed in museums, Picasso painted one of his most important works: Les Demoiselles d'Avignon. The oil painting portrayed five nude women on Carrer d'Avinyó, a street in Barcelona famous for its brothels. The figures were composed of multiple flat planes, with mask-like faces. The image was immediately controversial. Fellow modern artist Henri Matisse (with whom Picasso had a lifelong rivalry) famously mocked the work, calling it crude.
There was no stopping Picasso's artistic experimentation, however. By 1909, he and his artist friend, Georges Braque, developed an entirely new style: cubism. Marked by an amalgamation of geometric shapes, cubist paintings were like nothing the art world had ever seen. Some looked almost three-dimensional, with images "popping off" the canvas. Picasso and Braque began using pieces of cut paper to create cubist pieces, thus elevating collage into the fine art world for the first time. By the time he married, in 1918, Picasso's art had made him rich and famous.
Some of Picasso's personal beliefs shone through in the pacifist art of his later years. One of his most famous paintings, Guernica, portrays the aftermath of a Nazi bombing on the town of Guernica, in Basque. The painting's screaming figures include a terrified horse and a mother cradling a limp child in her arms. Guernica is considered one of history's most powerful anti-war artworks.
Picasso remained a prominent public figure for the rest of his life, passing away at age 91. Today, he is remembered for his breaking and redefining of the art world's rules. As Picasso himself said, "Learn the rules like a pro, so you can break them like an artist."
Below: one of Picasso's most famous cubist paintings, Guernica.