No thanks
Continue
Whoops!
Your free trial of Curious+ has expired
Person, Place, or Thing
Our encyclopedia of the odd and awe-inspiring.
Previous Next
October 11, 2020
1 CQ
Person: Eleanor Roosevelt 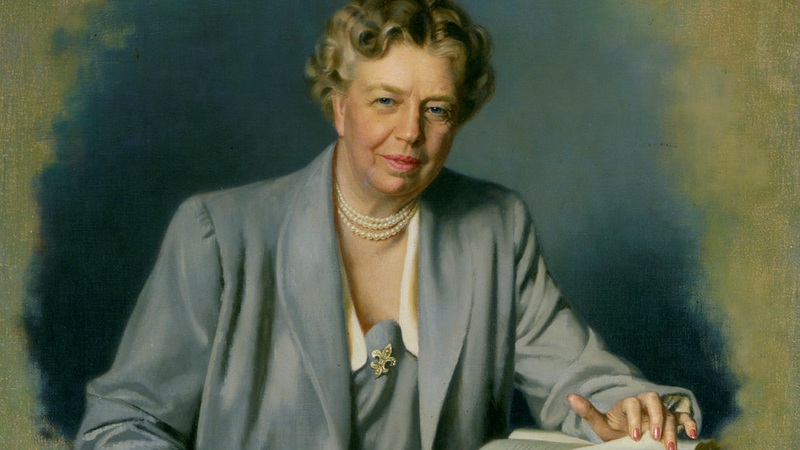 The First Lady of the World's grand ambitions.
She was the longest-serving First Lady of all time, but that's not why her legacy is so long-lived! Eleanor Roosevelt, born on this day in 1884, forever changed the role that First Ladies were expected to play in American culture. She was controversial in her own time (and widely beloved in modern times) for her outspoken nature, her civil rights activism, her women-only press conferences, and her fearlessness in publicly disagreeing with powerful men—including her own husband.
Anna Eleanor Roosevelt had a difficult childhood. Born in the Manhattan area, Eleanor's father Elliot was the brother of President Theodore Roosevelt. Eleanor was actually her middle name—she shared her first name, Anna, with her mother. Eleanor showed intelligence, maturity, and seriousness at a young age, causing her mother to nickname her "granny." In spite of the loss of her mother at a young age and father to a sanitarium, Roosevelt grew to be an outspoken young woman. She outright rejected the idea of women's physical beauty being their most important attribute, writing at age 14, "no matter how plain a woman may be, if truth and loyalty are stamped upon her face, all will be attracted to her."
After being educated at the Allenswood Academy, a private finishing school in England, Roosevelt began a secret love affair with her father's fifth cousin, Franklin Delano Roosevelt. They were married in 1905, with Theodore Roosevelt walking her down the aisle. Over the following years, the couple had six children. Eleanor became largely responsible for nursing Franklin back to health when he contracted polio in 1921 (though his legs remained paralyzed for life). As her children grew, Eleanor focused on her work outside the home, advocating for oppressed groups, such as Black Americans, women and poor workers. In 1927 she bought Todhunter School for Girls, which offered college preparatory courses for young women. That same year, she established a business, along with three friends, called Val-Kill Industries. It sold furniture and other traditional goods made by local farming families.
Roosevelt wasn't thrilled about becoming First Lady, in 1933. All the First Ladies she'd known had given up their own ambitions to serve their husbands' careers. Roosevelt refused to give up her business, even though many considered it distasteful for married women to work. She began holding her own press conferences, some of which were only open to female reporters, in an effort to force newspapers to hire more women. Her popular daily newspaper column, "My Day", was also the first of its kind. In 1940, she became the first First Lady to speak at a national party convention.
During her first year in the White House, Roosevelt made a point to match her husband's Presidential salary via her writing and lecturing (though she gave most of the money to charity). She publicly spoke out against some legislation that her husband supported, such as certain states' New Deal policies, which weren't giving enough relief money to Black Americans. She also supported the Civil Rights Movement, even though her husband kept quiet on race issues, to placate Southern voters.
Roosevelt remained in the spotlight long after leaving the White House. In 1946, Harry Truman appointed her as a delegate to the United Nations General Assembly. During her time there, she served as the first Chairperson of the Commission on Human Rights and was even instrumental in drafting the Universal Declaration on Human Rights! No wonder she was posthumously awarded the United Nations Human Rights Prize, in 1968.
Although some opposed Roosevelt's radical redefinition of the First Lady's role, many celebrated her. President Harry S. Truman called her the "First Lady of the World," while the Klu Klux Klan put a bounty on her head and the F.B.I. kept a file on her for suspected communist activities. Today, she's remembered as a beloved feminist icon, proving that speaking your mind can have lasting appeal.