No thanks
Continue
Whoops!
Your free trial of Curious+ has expired
Person, Place, or Thing
Our encyclopedia of the odd and awe-inspiring.
Previous Next
September 6, 2020
2 CQ
Person: John Lewis 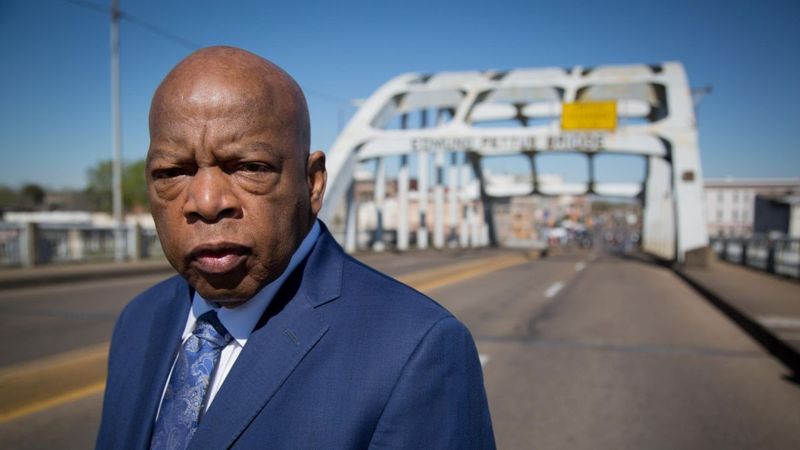 The good trouble of a Civil Rights leader.
The Civil Rights era wouldn't have been the same without the bravery and leadership of Representative John Lewis. While Lewis' most notable effort was during the "Bloody Sunday" march across the Edmund Pettus Bridge in Selma, Alabama, a closer look at his life leading up to the event sheds light on his incredible determination as a young Civil Rights organizer.
John Lewis was born on February 21, 1940 near Troy, Alabama. Growing up, he wanted to become a preacher, having both led his first public sermon and listened to Martin Luther King Jr. on the radio when he was 15. While attending the American Baptist Theological Seminary in Nashville, Tennessee, Lewis began learning about nonviolent protests and organized sit-ins which ended segregation practices at lunch counters in Nashville.
In May 1961, John Lewis became one of the first 13 Freedom Riders. They were part of the Congress of Racial Equality's (CORE) "Journey of Reconciliation" program to address racial segregation in interstate public transportation (which was deemed unconstitutional by the Supreme Court decision Morgan vs. Virginia in 1946). As a Freedom Rider, Lewis was beaten for using a whites-only restroom in South Carolina, arrested for breach of peace in Mississippi, and survived a bus firebombing by the Klu Klux Klan in Alabama. Later that year, Attorney General Robert Kennedy, working with the Interstate Commerce Commission, banned segregation in interstate bus travel, marking the success of Lewis and the Freedom Riders' campaign.
In 1963, Lewis became the chairman of the Student Nonviolent Coordinating Committee (SNCC) and one of the "Big Six" who organized the March on Washington. At the event on August 28th, Lewis delivered a speech supporting the Civil Rights Act., with reservations about how it insufficiently addressed fair employment practices, police brutality, and voting rights for black people. In a charged voice, he urged others to "get in and stay in the streets of every city, every village and hamlet of this nation until true freedom comes."
As the SNCC chairman, Lewis further worked to secure voting rights for African-Americans living in the South. His 1964 "Mississippi Freedom Summer" was a massive voter registration drive which recruited college students from across the country. On March 7, 1965, Lewis and fellow activist Hosea Williams led a group in prayer at a Selma, Alabama church prior to their walk (in pairs) to Montgomery. Some 600 protesters joined in, but at the Edmund Pettus Bridge, they were met by 150 law enforcement and posseemen, who announced a two-minute warning for the crowd to disperse. With 30 seconds left, the 150 attacked, wielding clubs, whips, and tear gas against the peaceful protesters. John Lewis suffered a skull fracture, and images of police beating the young, unarmed pastor spread across the country. The state-sanctioned violence against civil rights activists caused President Lyndon Johnson to introduce the Voting Rights Act to Congress on March 15th. It was passed and Johnson signed it into law on August 6th.
In the '70s, John Lewis temporarily served as the coordinator for President Carter's AmeriCorps VISTA program to help those in poverty. In 1986, he successfully ran for Georgia's 5th district, where he would later win 16 elections by 70% margins.
In a New York Times op-ed written just days before his passing, Lewis reflected on the recent George Floyd protests, how Emmett Till's lynching led him to pursue nonviolent protests, and the importance of voting as "the most powerful nonviolent change agent [we] have in a democratic society." John Lewis' model of getting into good, necessary trouble remains an effective battle plan for ensuring that equality and justice applies to every American citizen.
Below: an image of John Lewis walking across the Edmund Pettus Bridge on Bloody Sunday, and his funeral procession across the same bridge. A video of Lewis speaking at the March on Washington. 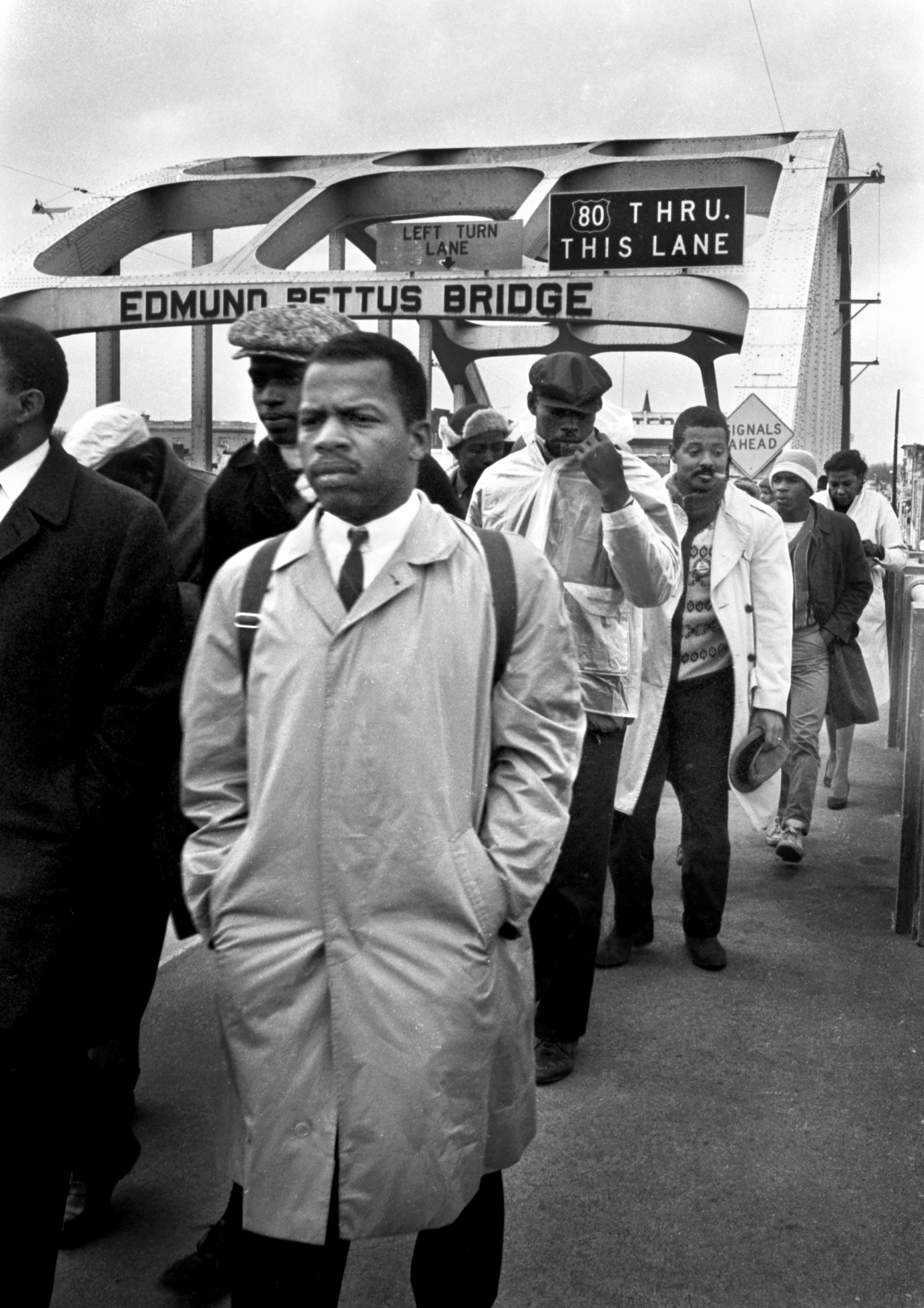 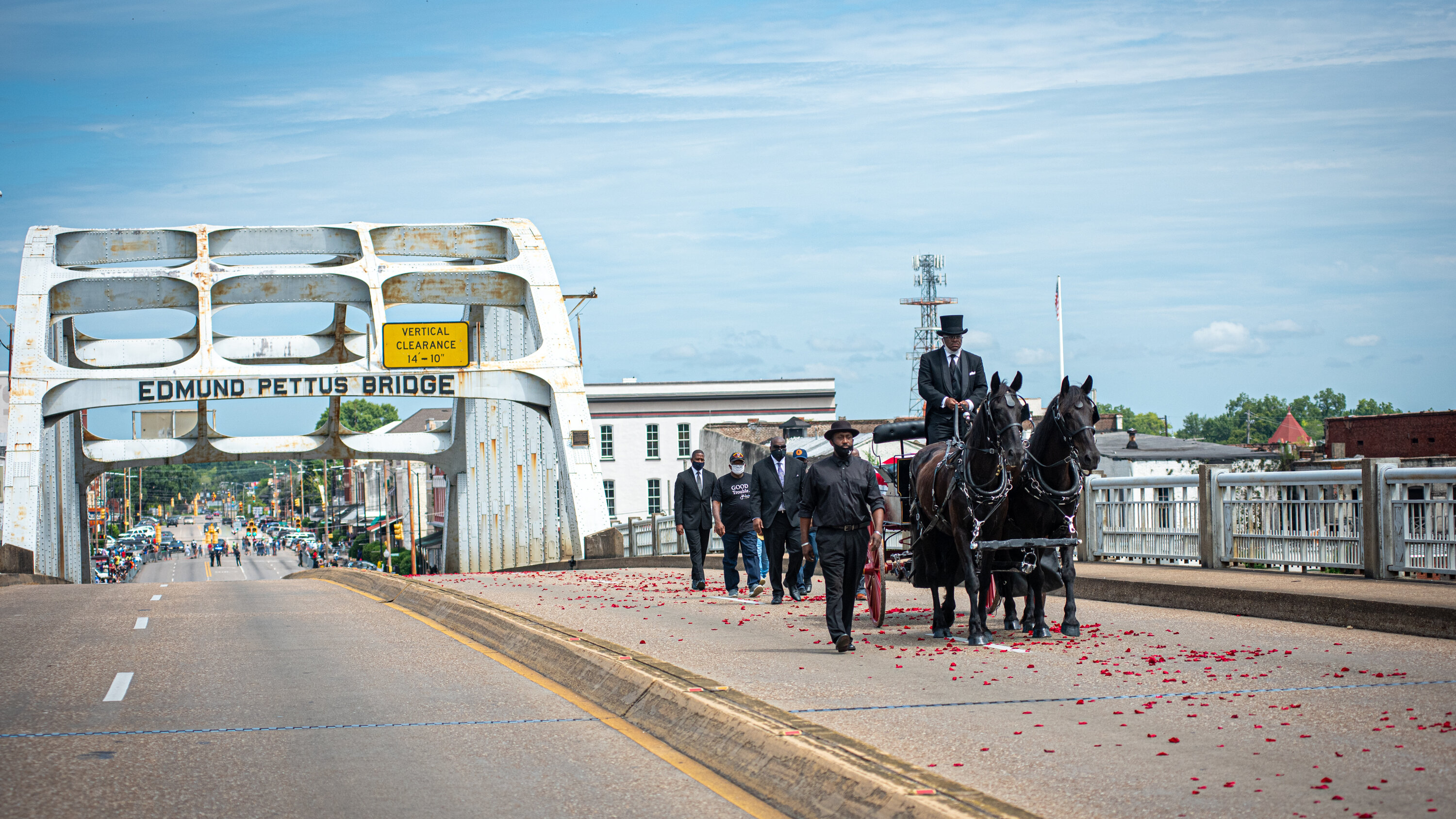 
More about this Curio:
PBS: "John Lewis: Get in the Way"
The New York Times: "Opinion: Together, You Can Redeem the Soul of Our Nation"
U.S. House of Representatives: "Article"
Rolling Stone: "John Lewis’ Fight Goes On"
The National Archives: "Confrontations for Justice"