No thanks
Continue
Whoops!
Your free trial of Curious+ has expired
Person, Place, or Thing
Our encyclopedia of the odd and awe-inspiring.
Previous Next
July 19, 2020
1 CQ
Person: Petrarch 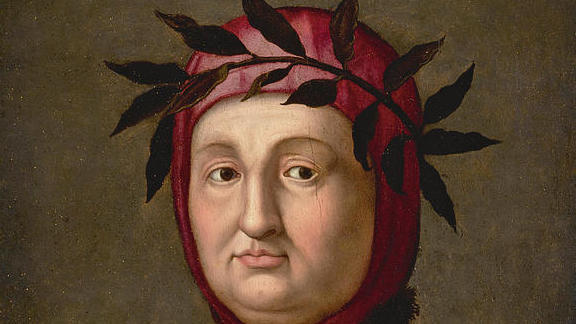 Modern Italy's first Renaissance man.
In literature, there are two main sonnet forms: the Shakespearian and the Petrarchan. The latter isn't nicknamed for its inventor, but rather Francesco Petrarcha ("Petrarch" in English), the Italian writer who made the form indispensable to Renaissance poets. Though he is primarily known for his poetics, Petrarch was and remains arguably one of the foremost modern thinkers and played a crucial role in the development of the Renaissance. Petrarch was born on July 20, 1304, in Arezzo, part of the Italian city-state of Tuscany. At his father's behest, he studied law at Montpellier and Bologna, though his true love was classical literature and writing. When his father died in 1326, Petrarch left law school stating, "I couldn't face making a merchandise of my mind." He later served the Catholic church in several capacities that allowed him to travel extensively in diplomatic missions across Europe. A year later, on April 6, 1327, Petrarch met a person who would change his life forever, Laura de Noves, at a church in Avignon. Their meeting did not lead to any kind of relationship, and Laura, like many of his beloveds, died tragically. That did not stop Petrarch from composing 366 poems over 40 years in honor of her beauty and his emotionally turbulent devotion to her. The resulting Il Canzoniere became a hugely influential work. It inextricably linked the theme of love with the 14-line sonnet poem, which would greatly influence English poets in the 16th century. Secondly, the work was written in vernacular Italian rather than Latin, adding to Italian's literary prestige. As Petrarch's scholarship grew, so too did his social reputation. His poetry and writings in Latin and Italian were highly regarded and earned him a life-long friendship with The Decameron writer, Giovanni Boccacio. The painter Simone Martini was commissioned to paint representations for Petrarch's translations of Virgil. On April 8, 1341, Petrarch traveled to Rome on Easter Sunday to receive the honor of being crowned the poet laureate (having declined a similarly timed request from Paris, France), a tradition which had not been performed since the Roman Empire fell. At the event, he delivered his famous "Coronation Oration" in praise of classical values and poetry: "There was a time, there was an age, that was happier for poets, an age when they were held in the highest honor…. especially when Caesar Augustus held imperial sway, under whom there flourished excellent poets: Virgil, Varius, Ovid, Horace, and many others." Through his lifelong work and extensive travels, Petrarch became a major influence in the Renaissance revival of ancient Latin and Greek thought. Then, in 1345, Petrarch discovered priceless letters penned by ancient Roman statesman, philosopher, and lawyer, Cicero. The rediscovery is credited with triggering the Renaissance humanism movement, and the encompassing Renaissance as a whole. Renaissance humanism sought to escape medieval scholasticism with a learned and virtuous citizenry. By the time of his death in 1374, Petrarch had amassed a vast library that was gifted to the city of Padua, Italy. Many of Petrarch's works were disseminated to far off places where they were well-received. In England, Petrarch's contemporary Geoffrey Chaucer translated and incorporated several of the Petrarch's works into his own writings. Some 200 years later, translations of Petrarch's sonnets by Thomas Wyatt inspired William Shakespeare to take up the poetic form in works like Romeo and Juliet and his Collected Sonnets. Now, nearly 700 years after his birth, Petrarch's scholarship, reverence for classical literature, and unrequited love for Laura remain key legacies in Europe's transition from medieval scarcity to a flourishing Renaissance.
More about this Curio:
Academy of American Poets: "Petrarch"
The New York Times: "Petrarch, the first humanist"
Yale Library: "Francesco Petrarcha"
The Guardian: "Petrarch—the poet who lost his head"