No thanks
Continue
Whoops!
Your free trial of Curious+ has expired
Person, Place, or Thing
Our encyclopedia of the odd and awe-inspiring.
Previous Next
May 10, 2020
1 CQ
Thing: Astor Place Riot of 1849 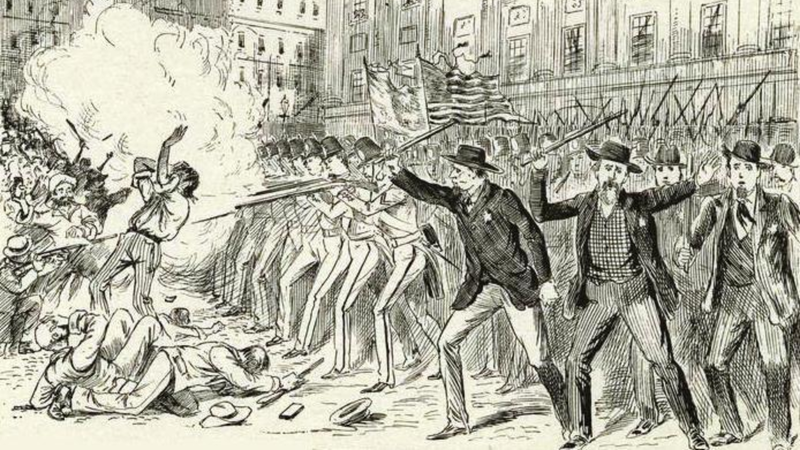 It started over Shakespeare and ended in bedlam
Theater lovers got more than they bargained for on May 10, 1849, when a rivalry between two Shakespearean actors, American Edwin Forrest and Englishman William Charles Macready, spilled into the streets of New York. The confrontation turned deadly when a rowdy crowd was confronted by armed soldiers. Although the Astor Place Riot seemingly started over Shakespeare, it had much more to do with tension over the growing class divide in early America.
The Astor Riot took place during the Antebellum Period—the time in American history between the War of 1812 and the American Civil War. As industry thrived, a wealth gap formed between business owners and workers. Until the Antebellum period, theaters had been places where rich and poor patrons intermingled. So, when wealthy Americans began building their own theaters in major cities, with tickets and dress codes that the poor could not afford, resentment naturally grew.
The feud between Macready, a Brit, and Forrest, an American, started off as a good-natured rivalry. Both men were known for acting in Shakespearian plays, but Macready generally toured wealthier venues. When Macready first toured in America, Forrest set up a rival tour, playing in the same cities but in poorer theaters. Eventually, Forrest toured in Macready's native England. The actors' rivalry became popular with the public. Wealthy Americans identified with Macready, while poor Americans identified with Forrest. Eventually, Forrest began blaming Macready for his poor audience attendance in England, and came to one of Macready's performances just to hiss from the audience. When Macready came back to America for another tour, Forrest booked more rival performances in the same cities, one of which in New York in 1849.
Trouble began brewing days before the riot. On May 7, Macready took the stage at the Astor Opera House in New York to perform Macbeth, only to be met with an audience of rowdy Forrest fans. The crowd hurled food at the actor until he was forced to flee the stage. Afterward, Macready was determined to return to England, but was convinced to stay by wealthy New Yorkers.
Macready's performance of Macbeth was rescheduled for May 10. This time, the theater's windows would be barricaded, its audience screened, and an armed militia stationed by Washington Square Park. However, none of this stopped a large crowd of poor New Yorkers from making their way toward the theater as the production got underway, to decry Macready for imposing British values on the American public.
Eventually, the crowd stormed the theater. Police were quickly overwhelmed. The militia made its way to the scene, some soldiers riding on horseback. Instead of dispersing, the crowd pelted the soldiers with bricks. Finally, the soldiers began firing. Many were wounded and over 20 rioters were killed. In a single evening, the United States lost more civilians to direct military action than at any point since the Revolutionary War. Major-General Charles Sandford later wrote, "During a period of thirty-five years of military service, I have never seen a mob so violent as the one on that evening."
Although New York would not see another large-scale riot until the Civil War was underway, the Astor Place Riot forever changed the way that American police dealt with crowds. Riot training became commonplace and shields were added to police arsenals in urban areas, along with heavier batons. Macready, who was lucky to have escaped the United States with his life, never acted in an American theater again. As Shakespeare once wrote, "parting is such sweet sorrow."
Below: a video explaining the riot's historical significance.