No thanks
Continue
Whoops!
Your free trial of Curious+ has expired
Person, Place, or Thing
Our encyclopedia of the odd and awe-inspiring.
Previous Next
March 15, 2020
1 CQ
Person: Fannie Lou Hamer 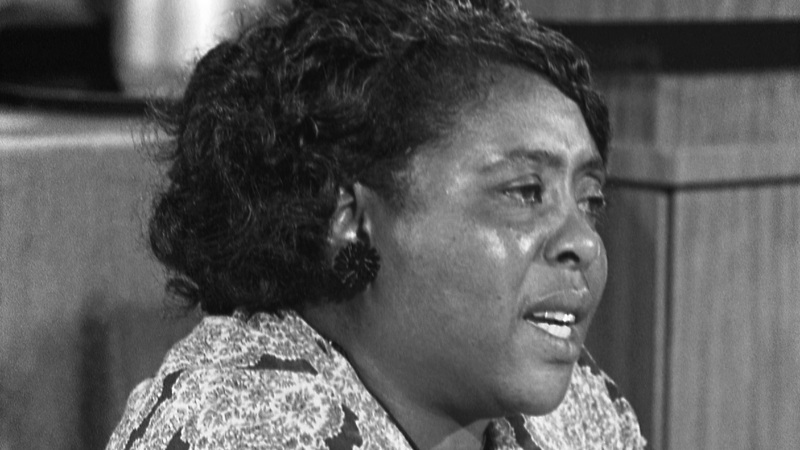 An activist who would not be held back, even by the President.
She famously said she was "sick and tired of being sick and tired," but civil rights activist Fannie Lou Hamer, who passed away on March 14, 1977, always fought on, regardless. While battling for the voting rights of black Americans, she fearlessly defied white segregationists, racist police, and even President Lyndon B. Johnson.
To say that Hamer had a difficult upbringing is an understatement. She was the youngest of 20 children, born to a sharecropping family in Mississippi, in 1917. Sharecropping, in which black families rented plots of land from white landowners in exchange for crop shares, was designed to keep black families in debt. Starting at just six years old, Hamer toiled in the fields with her family.
Throughout her young life, Hamer suffered numerous human rights violations. One of the worst occurred shortly after she got married at age 27. During what was supposed to be a small surgery to remove a tumor, a white doctor sterilized Hamer without permission. Forced sterilization of African American women was so common at the time, they were called "Mississippi appendectomies."
Now unable to give birth, Hamer and her husband adopted two daughters. Hamer became determined to fight against the kinds of injustices that she had suffered. In 1962, Hamer and 17 others traveled to the county seat to register to vote, which was extremely dangerous since the Klu Klux Klan menaced black people who attempted so. Hamer was turned away when she couldn't answer questions about the state constitution's "de facto" laws, thus failing the "literacy test" designed to keep black people from registering. Hamer was harassed by police on her way home and fired from her sharecropping job when she returned.
Unwavering, Hamer became a community organizer, helping others learn to read, write, and register to vote. She co-founded the Mississippi Freedom Democratic Party. Hamer was an exceptional public speaker, and her words inspired many to follow her cause. In 1964, she did the unthinkable and ran for United States Congress, with the support of fellow activists like Martin Luther King Jr.
At the 1964 Democratic National Convention, Hamer appealed to the Democratic National Committee. She wanted the Committee to seat delegates from the Mississippi Democratic Freedom party, rather than the usual Mississippi segregationist delegates. President Lyndon B. Johnson, fearing the loss of support from Southern Democrats, tried silencing Hamer. He sent advisors to persuade her not to deliver her planned speech, but she refused. So, Johnson called a news conference during Hamer's speech, to draw away the attention of national news networks.
The ploy didn't work, however. Hamer's fiery, 13-minute speech, which included vivid details of a police beating that left her with kidney damage, was widely broadcasted. Although the freedom party delegates were not seated, Hamer's speech drew national attention and is remembered as one of the most important speeches of the American Civil Rights Movement. When asked why she persisted in giving her speech, Hamer answered "All my life I've been sick and tired. Now I'm sick and tired of being sick and tired."
For the remainder of her life, Hamer focused on forming organizations to help black Southern families. She helped end unjust sharecropping by starting the Freedom Farms Corporation, in 1969, which lent land to black families until they could afford to buy it. In 1971, she helped form the National Women's Political Caucus. In addition to helping black people register to vote, she set up local organizations to provide childcare to working families. Even a 1976 cancer diagnosis couldn't stop her from fighting. When she died in 1977, she was laid to rest in Ruleville. We take solace knowing she is resting in eternal peace.