No thanks
Continue
Whoops!
Your free trial of Curious+ has expired
Person, Place, or Thing
Our encyclopedia of the odd and awe-inspiring.
Previous Next
January 26, 2020
1 CQ
Place: The Apollo Theater 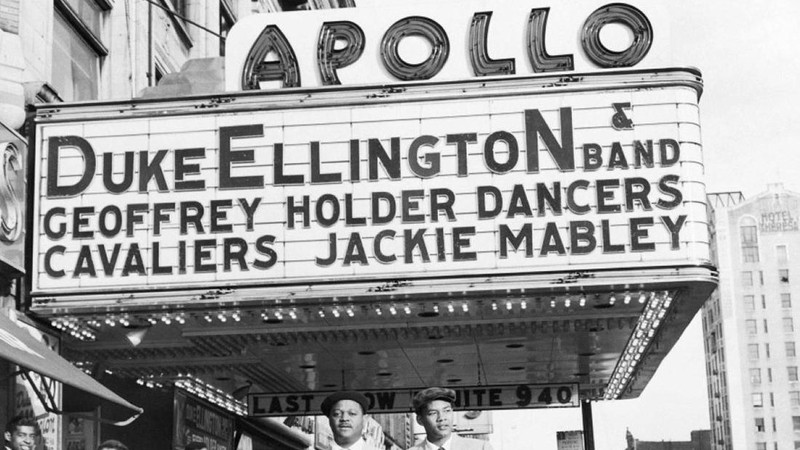 Showtime at Harlem's greatest theater.
Among America's historic buildings, few can match the legacy of the Apollo Theater in Harlem. The New York City music hall located at 253 West 125th Street has seen its share of highs and lows. From its astounding talent roster—which included the likes of Duke Ellington and Jackie "Moms" Mabley—to the hard times when its immense history was nearly lost to economic misfortunes, the Apollo has proven it will stand the test of time.
The neoclassical theater that became the Apollo was designed by architect George Keister and built in 1913. Far from its famed future, the location operated as a whites-only burlesque theater with producers Jules Hurtig and Harry Seamon running the shows. In 1933, a city-wide ban on burlesque put the two men out of business, and the theater into disrepair. The owner of the building, Sydney Cohen stepped in with business partner Morris Sussman to reopen and reinvigorate the space. On January 26, 1934, the Apollo Theater opened with the show "Jazz a la Carte" and a new format with variety revues and Amateur Night contests. They also appealed to a new audience: Harlem's growing African-American communities of the early 20th century. By 1937, the theater was the nation's largest employer of black workers in the theatre industry. It was also the only in New York City to hire black workers for backstage positions.
Where to begin with the legends who took the stage at the Apollo? Jazz singer Sarah Vaughan, rock guitar virtuoso Jimi Hendrix, and the pop-quintet the Jackson 5 all claimed victories as winners of Amateur Nights at the Apollo. Comedians Moms Mabley, Redd Foxx, and Richard Pryor sold-out shows at the venue. Funk legend James Brown's 1962 Live at the Apollo album, recorded at the location, spent 66 weeks on the Billboard charts. The "Queen of Soul," Aretha Franklin, and her not-to-be-missed shows were noted on the marquee with the phrase "She's Home." "The King of Pop," Michael Jackson, performed a free concert at the Apollo in April 2002: the last onstage performance before he passed away. Anybody who was anyone in popular black music of the 20th century—be it jazz, R&B, or hip-hop—paid their respects to the location where black excellence was a nearly nightly display.
Several issues with competing venues and studio-recorded music products caused the Apollo to once again shut its doors in 1976. Noting the historical importance of the Apollo to the histories of both Harlem and America, businessman Percy Sutton gathered investors and bought the theater in 1983, before securing its status among the National Register of Historic Places and New York City Landmarks. He also restarted the popular Amateur Nights at the theater—which, beginning in 1987, were nationally televised alongside feature performers as Showtime at the Apollo. The predecessor to musical competition shows like American Idol, Showtime had a prominent audience participation aspect to it: a loud standing ovation could jumpstart a career. If booing became raucous, well, a siren would sound, and an "executioner" would arrive onstage to do a comic routine that both ended and upstaged the previous performance.
In 1991, the State of New York purchased the Apollo Theater and established the non-profit Apollo Theater Foundation to manage the venue and preserve its history. The location was recently renovated, and continues to make news, as a young Senator named Barack Obama hosted a fundraiser there in 2007, and R&B singer Bruno Mars recorded Bruno Mars: 24K Magic Live at the Apollo in 2017. If the past 86 years are any indication the Apollo Theater will continue to live up to its motto as a place "where stars are born and legends are made."
Below: a video of James Brown performing I Got the Feeling at the famed Apollo Theater; an informal memorial at the Harlem location to celebrate the life of Aretha Franklin.