No thanks
Continue
Whoops!
Your free trial of Curious+ has expired
Person, Place, or Thing
Our encyclopedia of the odd and awe-inspiring.
Previous Next
December 8, 2019
1 CQ
Person: Cicero 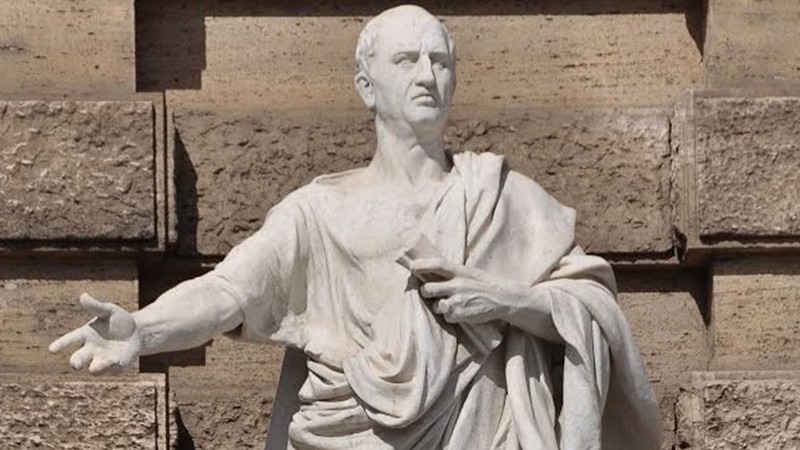 The rise and fall of Rome's greatest orator.
As rivals like Julius Caesar and Mark Antony vied for despotic control over the Late Roman Republic, one man defended democracy: polymath Marcus Tullius Cicero, who, unlike Caesar, was not born of the ruling class. The statesman and philosopher used his powerful speeches and writings to advocate for the Roman Republic, even as tyrannical forces closed in on him.
Born in 106 B.C.E. in Arpinum (now central Italy), Cicero was named "chickpea" in Latin, and likely came from an ancestor who was a farmer. His family was part of the equestrian order, just below the ruling senators and above the common plebeians. It was unusual for an equestrian to rise in the ranks of society, but Cicero was no ordinary person. He extensively read the works of philosophers and traveled to Greece to hone his rhetoric. After marrying into a wealthy family at the age of 27, he rose quickly through the ranks of government, becoming a quaestor (treasurer), praetor (magistrate), and finally the highest political office: consul, in 63 B.C.E. at the age of 43. He was the youngest man of common lineage to ever attain the position.
In spite of the respect he commanded among Romans for his writings, wisdom, and unparalleled oration, Cicero's rise to the top was constantly challenged. In the same year he became consul, he uncovered a plot to overthrow the Roman Republic and thwarted an assassination attempt on his life, both devised by Senator Catiline. The anti-Republic First Triumvirate—comprised of Julius Caesar, Pompey, and Crassus—preyed on Cicero when he executed Catiline's co-conspirators without trial. An abuse of power, they called the action: one worthy of death in its own right. Cicero realized that each of the Triumvirate were out to seize as much individualized power over the Republic as they could. He retreated from public life to work on his writings.
Political alliances remained tumultuous for the rest of Cicero's life. Rome transitioned from a republic to an empire, and power was consolidated amongst a few power-hungry leaders. Upon hearing of the assassination of Julius Caesar in 44 B.C.E., Cicero supported the actions of Brutus and the other assassins, making an enemy of Mark Antony, Caesar's surviving war general. In 43 B.C.E., Cicero delivered some 14 speeches called the Philippics to the Roman senate, in which he decried Antony's tyranny and praised the values of liberty. In a last desperate attempt to thwart Antony, Cicero aligned himself with Caesar's rightful heir and Antony's antagonist, Octavian. In a series of events that would spell Cicero's demise, Octavian and Antony reconciled and joined forces with Lepidus to create the Second Triumvirate. Antony sought revenge against Cicero, and in December of 43 B.C.E., the great Roman orator was caught by centurions leaving his villa at Formiae. His head and hands were cut off and delivered to Mark Antony, where they were later displayed at the Rostra platform in the Roman Forum.
While Cicero's political life was met with a bloody end, his legacy and writings have had far more fortunate fates. The rediscovery of his letters in the 14th century by the Italian poet Petrarch is said to have ignited the Renaissance in Europe. When the printing press was invented in 1440 by Johannes Gutenberg, the third book to be printed was Cicero's De Officiis ("On Duties"), a work he wrote in his last year of life on how to live morally. Enlightenment philosophers like John Locke and Voltaire pored over Cicero's teachings on liberty, as did the U.S. Founding Fathers like John Adams, who once said, "As all the ages of the world have not produced a greater statesman and philosopher united than Cicero, his authority should have great weight."
Image credit & copyright: Foundation for Economic Education