No thanks
Continue
Whoops!
Your free trial of Curious+ has expired
Person, Place, or Thing
Our encyclopedia of the odd and awe-inspiring.
Previous Next
November 24, 2019
1 CQ
Thing: National Day of Mourning 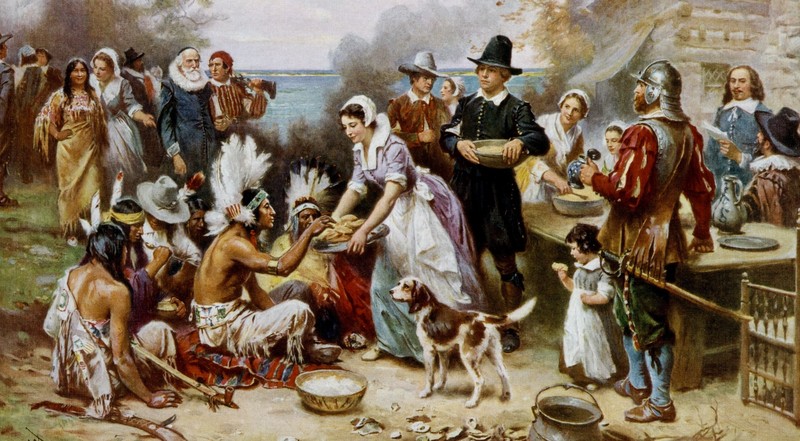 The complicated history of the first Thanksgiving guests.
For some, Thanksgiving is a time to gather with family and indulge in turkey and pumpkin pie. For the remnants of the Wampanoag tribes of New England, the holiday has been renamed the National Day of Mourning, after what it has caused them. Today we're taking a look at the very first Thanksgiving of 1621, the mistreatment of the Wampanoag by British colonists, and the lasting effects of trauma on Indigenous peoples in order to have a more comprehensive view of American history.
The Wampanoag name means "People of the Dawn," and long before the first British fishermen landed in Massachusetts and Rhode Island, the confederacy of tribes celebrated autumn harvests with Thanksgiving-like feasts. Their tribes were matrilineal, with women handling agricultural duties and wielding great socio-economic power, while men hunted game, held political roles, and fought in wars. It's estimated that some 100,000 people lived among 69 villages in the 1610s, through contact with European traders and their diseases diminished the numbers to 40,000. Some were also abducted and sold into slavery, like Tisquantum, the Pawtuxet Indian who became Squanto.
Tisquantum was sold into slavery in Spain in 1614, and returned to North America on an expedition in 1619, only to find out his tribe at Plymouth had been wiped out by a European disease. When the Mayflower landed at Cape Cod, Massachusetts, in 1620, Squanto was literally a lifesaver for the starved, cold, and dying Pilgrims. He showed them how to use fish as fertilizer for corn, and how to grow gourds that would climb the corn stalks. He became an emissary and Wampanoag interpreter for the English.
By many accounts, the first Thanksgiving meal in 1621 was a respite from the various turmoils afflicting both the Pilgrims and the Wampanoag. Governor William Bradford of Plymouth Colony invited Massasoit, the Grand Sachem (leader of the tribes), to the feast. Massasoit brought 90 warriors with foods like venison, lobster, fish, oysters, corn, and squash—very much staples of New England seafood dining, but hardly what Americans might recognize as Thanksgiving food today. Together, they feasted for three days.
The peace did not last. As part of the Pequot War, on May 27, 1637, the governor of the Massachusetts Bay colony, Bradford, designated a "day of Thanksgiving" after the colony took part in the previous day's massacre at Pequot Fort, near the Mystic River. About 700 Pequot of the Wampanoag nation—mostly women, children, elderly, and the infirm—were killed when the fort was set aflame, with survivors sold as slaves in the West Indies. Tensions persisted even as Puritan missionaries established "praying towns" in 1650 for Wampanoag survivors to convert and culturally assimilate to Christianity. In 1675, King Philip's War broke out between New England tribes and colonists, decimating Wampanoag numbers to only 400. It's no wonder that under these democidal conditions, in 1970, Wampanoag leader Wamsutta (aka Frank James) was disinvited to the 350th anniversary of the Pilgrim's arrival when event planners learned of the content of his speech: Wamsutta planned to condemn the Pilgrims' initial grave-robbing, kidnapping, and enslavement of the Wampanoag, among other atrocities committed against the tribal nation.
In response to the controversial snubbing, Wamsutta and the United American Indians of New England traveled to Cole's Hill in Massachusetts to hold the National Day of Mourning on the same day as Thanksgiving (or the last Thursday in November, an official holiday declared by President Lincoln in October 1863). The event features a march through the Plymouth district and speeches from Native American speakers. Their efforts are meant to educate people about the Wampanoag's history and the atrocities of colonization rarely covered in-depth in U.S. history books. Lending them an ear is the least one can do during the holiday season, as we work towards honesty, equitable historical representation, and humanitarian communion for all.
Image credit & copyright: Voa News