No thanks
Continue
Whoops!
Your free trial of Curious+ has expired
Person, Place, or Thing
Our encyclopedia of the odd and awe-inspiring.
Previous Next
December 1, 2019
1 CQ
Person: Rosa Parks 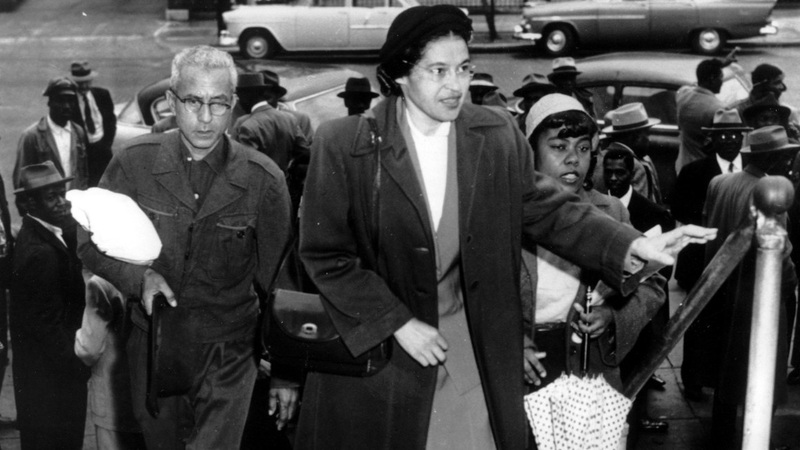 The activist whose arrest sparked the flame of the Civil Rights Movement.
In photos, she looks like a normal, middle-aged woman. Yet, her face is iconic, her strength legendary. She is Rosa Parks, the woman who started the American Civil Rights Movement with one brave act on a Montgomery bus, on today's date in 1955. But the act of courage wasn't preplanned—in fact, a personal vendetta may have had a hand.
Racial prejudice was familiar to Parks from a young age. Born in 1913, she was raised in Pine Level, Alabama, by her mother and maternal grandparents, both of whom were former slaves. As a child, Parks once watched her grandfather stand guard as Klu Klux Klan members marched down the street. At Parks's childhood school, white students rode the bus while black students were forced to walk.
Before she could earn her high school diploma, Parks had to drop out and get a job in Montgomery to support her family. At age 19, she married Raymond Parks, an NAACP member and civil rights advocate who supported her while she went back to attain her diploma. Parks joined him in the Montgomery NAACP in 1943, becoming the chapter's youth leader and secretary. She also worked as a seamstress at a Montgomery Department store.
On December 1, 1955, Parks boarded a bus on the way home from work. At the time, Jim Crow laws made racial segregation legal. White passengers boarded and sat at the front of the bus, and black passengers did both at the back. If the white section became full, black passengers had to give up their seats to white passengers. The driver that day was James Blake, who in 1943 had forced Parks to re-enter through his bus' back door after paying, only to drive off when she obeyed. She had managed to avoid him for 10 years.
When the white section of the bus became full that day, Blake demanded that four black passengers give up their seats. Three complied, but 42-year-old Rosa Parks refused. When Blake asked, "Why don't you stand up?" Parks answered, "I don't think I should have to stand up." He called the police, and Parks was arrested. In her 1992 autobiography, Parks stated that she was too tired to give up her seat that day—not physically, but mentally. "The only tired I was, was tired of giving in," she wrote.
By the time Parks was released from jail that evening, the Montgomery NAACP was planning a bus boycott. It began on December 5, the day of Parks' trial. Black community leaders formed the Montgomery Improvement Association (MIA) and elected Martin Luther King Jr. as minister of the Dexter Avenue Baptist Church. King became one of the boycott's most important leaders.
The Montgomery Bus Boycott lasted a whopping 381 days, and Parks was arrested again in February of 1956 alongside 100 fellow protestors. White supremacists retaliated by burning black churches and bombing the homes of Martin Luther King Jr. and Montgomery NAACP President E.D. Nixon. Eventually, a legal suit against Jim Crow laws, filed by Parks's lawyer, made it to the district court. The laws were ruled unconstitutional—a decision the U.S. Supreme Court upheld. The boycott ended on December 20, 1956, when the city stopped segregating their buses.
Parks and her husband, now targets for violence, moved to Detroit. She worked as a secretary in the office of U.S. Representative John Conyer and served on the Planned Parenthood Federation of America's board. After publishing her autobiography in 1992 and memoir in 1995, Parks received the Presidential Medal of Freedom in 1996, and the Congressional Gold Medal in 1997. These are the highest awards given by the U.S. executive and legislative branches. Hardship continued to strike Parks late in life, however: she was robbed and assaulted at her apartment in 1994. Fortunately, the founder of Little Caesar's pizza, Mike Ilitch, got in touch with her network upon hearing the news, and secretly paid her rent at a more secure location for the rest of her life.
Even after she passed away in 2005, at the age of 92, Parks was honored as an American hero. She was the first woman to lie in honor in the U.S. Capitol Rotunda, in Washington, D.C. Today, Rosa Parks is referred to as "the mother of the civil rights movement." Her life serves as a reminder that the bravery of a single person can change the world.
Below: Rosa Parks speaks about her arrest and the Civil Rights Movement.