No thanks
Continue
Whoops!
Your free trial of Curious+ has expired
Person, Place, or Thing
Our encyclopedia of the odd and awe-inspiring.
Previous Next
November 17, 2019
1 CQ
Person: Richard Nixon 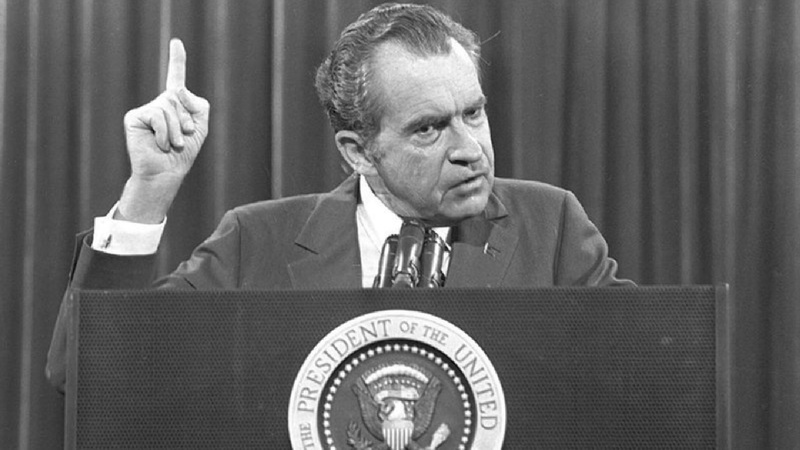 A look at one of the U.S.A.'s most controversial presidents.
When a government official must publicly declare that they aren't a criminal, it's usually a bad sign. But Richard Milhous Nixon, the 37th President of the United States, did just that on November 17, 1973, during a now-infamous speech. The address came on the heels of a government wiretapping scandal which had cemented Nixon's place as an extremely controversial President. On August 9, 1974, Nixon became the first and only U.S. President to ever resign from office, leaving behind a strange governmental legacy.
Born January 9, 1913, Nixon started making waves early in his career. In 1946, after some time in the navy, he won a seat in the U.S. House of Representatives at the age of 33. But it was during the "Red Scare" of the late 1940s and early 1950s, in which everyone from government officials to Hollywood actors were accused of being communists, that Nixon truly made a name for himself. He became known as a fervent anti-communist when he sat on the rather dystopian-sounding (and later disgraced) "House Un-American Activities Committee" and aggressively questioned former State Department official Alger Hiss, who was accused of being a communist spy.
Nixon gained a seat in the U.S. Senate in 1950. In 1952, he won the nomination to run as Vice President to Dwight D. Eisenhower, but soon the New York Post reported that Nixon was improperly using political contributions, which he kept in a secret "slush fund." In response, Nixon gave a now-famous address—the "Checkers" speech—in which he insisted that the only political gift he had ever received was his daughter's cocker spaniel, Checkers. Nixon was allowed to run with Eisenhower, and became Vice President later that year.
Nixon first ran for President himself in 1960, but lost to Democratic opponent John F. Kennedy. He didn't launch another Presidential campaign until 1968. His biggest campaign promise was to end the Vietnam War and the draft, which were hugely unpopular. This helped propel him to a narrow victory. During his first term, Nixon focused on easing tensions with China and Russia. Ending the Vietnam War proved difficult for a number of logistical reasons, and a treaty wasn't signed until 1973, during Nixon's second term. It was around this time that the scandal for which Nixon is best remembered came to light, thanks to a secret informant.
According to the source, Nixon's administration had burglarized and wiretapped the Democratic Party National Headquarters at the Watergate complex in Washington, D.C., during his re-election campaign. Government investigations revealed that the five men connected with the burglary had been hired by the Republican Party's Committee to Re-elect the President, and that Nixon had tried to hide his involvement by paying the burglars hush money. He was even caught on tape discussing how to block the FBI's investigation.
In 1973, at the height of national outrage over the Watergate scandal, Nixon gave his now-infamous speech, saying "...people have got to know whether or not their president is a crook. Well, I am not a crook. I have earned everything I have got." The majority of the U.S. government didn't agree, however. By 1974, it became obvious that Nixon would be removed from office. He resigned from the Presidency on August 9, 1974.
When Gerald Ford assumed the Presidency in Nixon's place, he pardoned Nixon of all crimes he had committed while in office. Nixon largely remained out of the public eye for the remainder of his life. He passed away from complications from a stroke in 1994. No one can deny that the legacy "Tricky Dick" left behind isn't unique...though surely not in the way he had hoped for!
Below: footage of Nixon's "I am not a crook" speech.

More about this Curio:
Daily News: "President Nixon says, 'I'm not a crook,' on national television"
Biography: "Richard Nixon: Biography (1913-1994)"
Orlando Weekly: "Today is the anniversary of Nixon's 'I am not a crook' speech at Disney World"
Encyclopedia Britannica: "Richard Nixon: President of the United States"