No thanks
Continue
Whoops!
Your free trial of Curious+ has expired
Person, Place, or Thing
Our encyclopedia of the odd and awe-inspiring.
Previous Next
November 3, 2019
1 CQ
Place: One World Trade Center 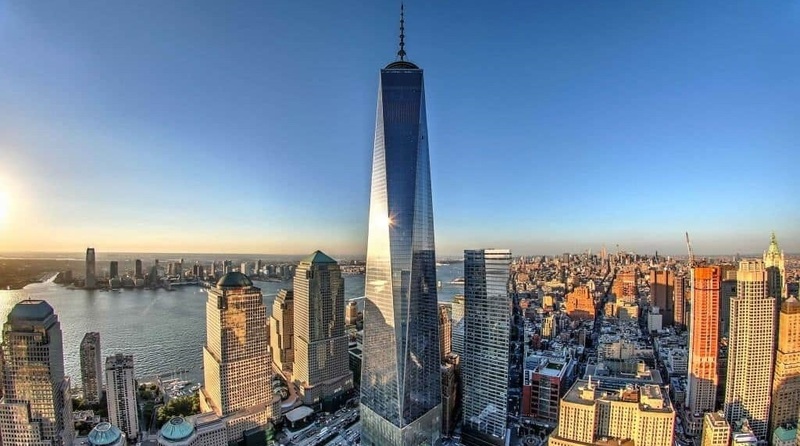 How one of the world's tallest buildings grew to tower over tragedy.
When is a building more than just a building? When it's constructed as a symbol of national unity and perseverance in the face of tragedy. One World Trade Center, in New York City, first opened to the public on November 3, 2014. It serves as the main building of the new World Trade Center Complex, standing in place of the Twin Towers that were destroyed in the terrorist attacks of September 11, 2001. Everything about the massive, sleek, ultra-modern skyscraper, from its placement to its height, was designed to send a patriotic message.
In 2002, while the United States was still reeling from 9/11, plans to rebuild were already underway. The Lower Manhattan Development Corporation and developer Larry Silverstein held a contest in which submitters could propose how to best memorialize the site. But things didn't exactly go as planned. The public rejected the first round of designs for a number of reasons, one of which being that none of the proposals sought to include patriotism as a focal theme.
Eventually, Polish-American architect Daniel Libeskind's ultra-modern design, which included elements like wind turbines and a "vertical world" sky garden on the roof, was chosen as the contest's winner out of 2,000 submissions. However, many parts of Libeskind's proposal (including the turbines and gardens) were scrapped or reworked due to budget constraints or safety concerns, such as susceptibility to truck bombings. Skidmore, Owings & Merrill—the American firm that designed Dubai's Burj Khalifa, the tallest building in the world—had their architect David Childs offer up an alternative to Libeskind's mock-up. It wasn't until June 28, 2005, that Childs' final design for the new One World Trade Center, or "Freedom Tower," as it was then called, was released to the public.
Childs' vision retained some of Libeskind's aspirations. Namely, the tower's ambitious height would symbolize American ingenuity and perseverance, and also be numerically significant. The building would be 1,776 feet high—1776 being the year that the United States declared Independence. It would also share the same name as the North Tower of the previous World Trade Center, and stand in the spot where 6 World Trade Center used to be. It would also feature offices for various businesses as well as an observatory at 1,268 feet.
Construction began in 2006 and ended up lasting a total of eight years. The silver building was constructed from over 40,000 metric tons of structural steel and more than 150,000 cubic yards of concrete, to make it one of the sturdiest buildings in the world and safe from attacks. Even during its construction, One World Trade Center was deliberately used as a patriotic symbol. On July 4, 2011, it was lit up in red white and blue, and again that same year on September 11, to mark the 10th anniversary of the terrorist attacks.
Today, One World Trade Center is not only the tallest building in the new World Trade Center Complex, it is the tallest in the United States and the Western Hemisphere, as well as the seventh-tallest building in the world. It also tapers octagonally toward the top. This ensures that it's a unique-looking part of the New York city skyline, just as the two famous towers of the old World Trade Center used to be. As of today, it's regained much of the Twin Towers' former prestige, leasing nearly 70 percent of its 3,000,000,000 square feet of office space to businesses like Condé Nast and broadcast tenants like CBS and PBS. One World Trade Center is both an architectural marvel and a pretty impressive way to communicate a message: you can't keep us down.
Image credit & copyright: Michael Mahesh PANYNJ