No thanks
Continue
Whoops!
Your free trial of Curious+ has expired
Person, Place, or Thing
Our encyclopedia of the odd and awe-inspiring.
Previous Next
September 15, 2019
1 CQ
Person: Alexander von Humboldt 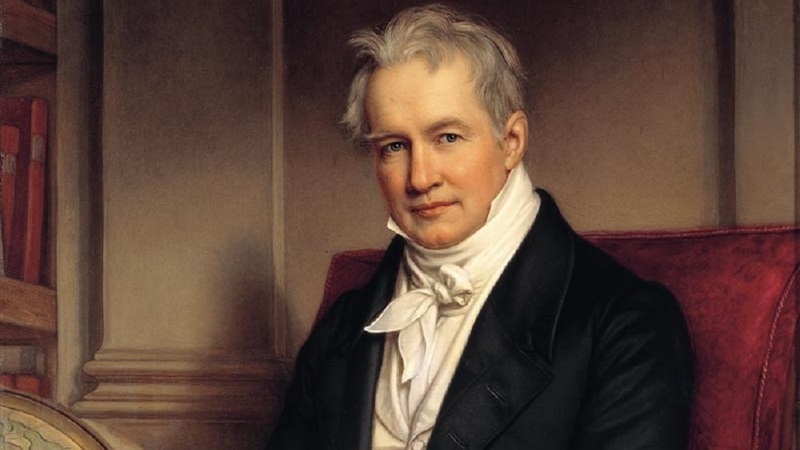 The naturalist who discovered man-made climate change.
Discovering an important global phenomenon would be successful enough for most people, but not for polymath and show-off Alexander Von Humboldt. This German naturalist, explorer, and geographer—born September 14, 1769—not only discovered man-made climate change, he also coined a popular astronomy term and had a species named after him—all of which earned him the nickname "the last man who knew everything."
The son of a Prussian nobleman, Humboldt studied at the University of Göttingen before dedicating himself to geology and mineralogy at the School of Mines in Freiberg. As a student, Humbolt met a man whose influence would change his life forever: Georg Forster, an explorer who had accompanied the famous Captain Cook on his second voyage to the antarctic. Humboldt realized then that he also wanted to explore the world and discover its mysteries.
In 1797, Humboldt finally got his chance to travel. Leaving behind his studies of mine-related geology in Europe, he went off to explore the Spanish colonies in Central and South America. There, Humbolt teamed up with French botanist Aimé Bonpland and trekked across the continent for five years straight, traveling through Venezuela, down the Orinoco River, and through the Andes Mountains to Bogotá.
While studying the plant life and geology of the Americas, Humbolt began to form theories about the ways in which plant life was affected by geography, and vice versa. These ideas laid the groundwork for a field of study that would later become known as biogeography. Later, on a journey in Lima, Peru, Humboldt set a world climbing record when he nearly reached the summit of Mt. Chimborazo, which at the time was the world's tallest known volcano. There, Humboldt solidified his view that certain types of plants, such as lichens or ferns, could only grow under certain conditions, like mountain climates—noting how similar the South American mountain plants were to those in the Swiss Alps, in Europe.
Later, in Venezuela, Humboldt observed the effects of mass deforestation, and predicted that, as technology grew, humans would begin to affect not only their physical environment, but the climate itself. Humboldt eventually published several books containing his extensive research and tales of his travels, including Cosmos, in 1845. It was the publication of this book which popularized the term "cosmos"—an ancient Greek word for the "order of the universe"—in scientific communities.
After spending his entire inherited fortune on his travels, Humboldt returned to Prussia, where he served as an advisor to the King. He spent the rest of his life giving science lectures across Europe, mostly in Germany. Humboldt's influence on scientific studies didn't stop with his own, direct contributions, however. It was only upon reading his work that Charles Darwin became enamored with the idea of exploring South America. In fact, Charles Darwin's copy of Humboldt's Personal Narrative of Travels to the Equinoctial Regions of America, During the Years 1799-1804 is kept at Cambridge University Library, and is filled with scribbles and underlines from Darwin, who took the book with him on his own voyage. Great minds surely do think and travel alike!
Image credit & copyright: Joseph Karl Stieler