No thanks
Continue
Whoops!
Your free trial of Curious+ has expired
Art Curio
A daily dose of visual culture.
Previous Next
August 16, 2019
1 CQ
FLASHBACK | Plane gorgeous


German-American artist Peter Max was lucky enough to have a Boeing 777 serve as a canvas for his work. In the late 1990s, the psychedelic painter collaborated with Continental Airlines to doll up one of their commercial planes to celebrate New York City and the new millenium. Max used many of the same colors found in his canvas paintings: a sunny bright yellow, a bold red, and a calm blue. The overall effect pays homage to the shades of the sky—where the work of art would spend much of its time for the next several years, carrying people out of New York and often being photographed by surprised passengers in other planes. Though the Max plane has since been painted over, its seven years of airtime encouraged brightly colored art on planes owned by other airlines. Max's plane draws on a long tradition of art on aircraft, which dates back to World War I, when ground crews would often paint beautiful women onto the noses of military planes to boost the morale of pilots before they headed to Europe. We're sure spotting this beauty in the sky would've pepped up an otherwise humdrum flight!
Below: another Peter Max painting called Buddha Moon; the artist Don Allen admires nose art he painted on a World War II fighter plane. 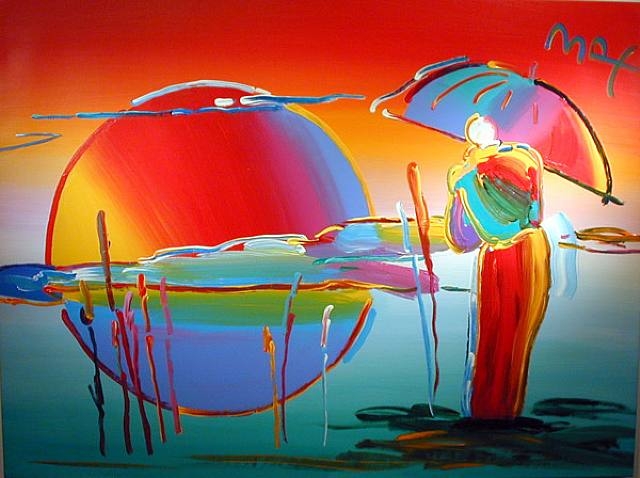 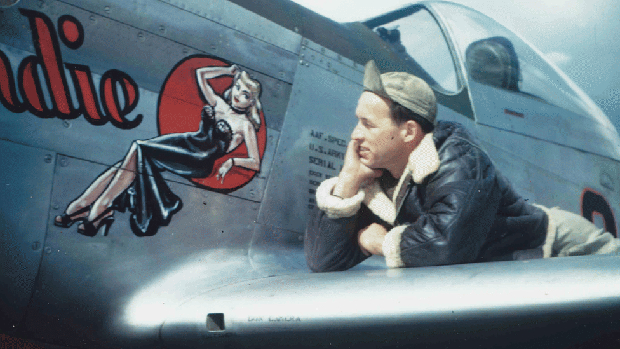