No thanks
Continue
Whoops!
Your free trial of Curious+ has expired
Person, Place, or Thing
Our encyclopedia of the odd and awe-inspiring.
Previous Next
August 11, 2019
1 CQ
Place: Galápagos Islands 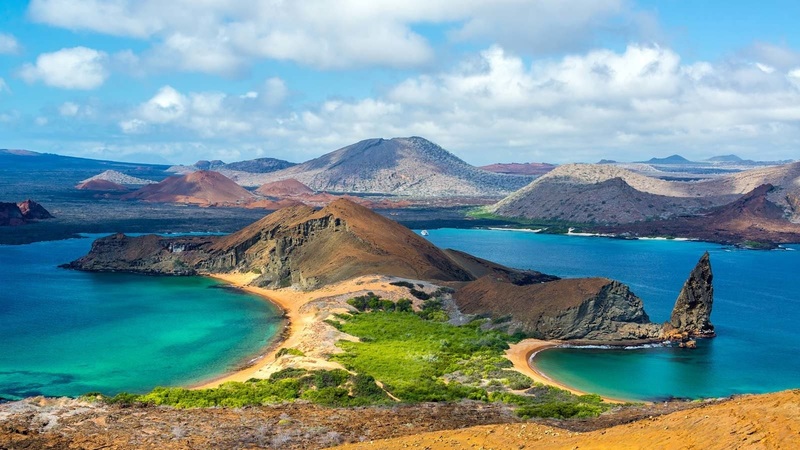 These volcanic islands changed the study of life on earth.
The Galápagos Islands might not be a paradise for humans, but they certainly are for rare animals! Located 600 miles off the coast of Ecuador, this chain of 13 volcanic islands, smaller islets, and rocks in the South Pacific boasts pristine beaches, desert-like mountains, and a menagerie of wildlife found nowhere else on earth. Today, the scientific community is indebted to the Galápagos for these reasons.
August happens to the coolest month of the year in the Galápagos, and the breeding season for many animals, including the giant tortoise and a population of around 7,000 hilariously named blue-footed boobies. Beside them, marine iguanas dive into the ocean to munch on algae, growing on rocks on the ocean floor. Various lizards scurry into cracks between massive lava rocks produced by 13 active volcanoes. Galápagos sea lions even boldly approach human visitors, without fear.
While the locale is rich in reptilian and avian life, there are no large mammals, and very few predators in general. Wildlife on the Galápagos is varied and unique, as it is on most islands, due to the pressures of natural selection in such a confined environment. Animals have evolved all sorts of interesting adaptations—for example, the islands' lack of predators makes it safe for several rare bird species, such as the waved albatross, to build their nests right on the ground.
The islands are so isolated, they weren't discovered until 1535, when Spanish noble and bishop of Peru Tomás de Berlanga was sailing to Panama and blown wildly off course. His impression of them was tepid. "Dross, worthless," he called them, citing the islands' inability to grow "a little grass, but only some thistles." Over the next 300 years, sailors, whalers, and buccaneers regarded them the same. Thankfully, this helped preserve their stunning wildlife until someone finally came along who rightfully appreciated their rich diversity: English naturalist Charles Darwin.
In 1835, Darwin spent five weeks studying the local marine iguanas, penguins, sea lions, and finches that are all endemic to the islands. He immediately noticed that certain species of finches, many now named after him, differed slightly, depending on where exactly they were located. For example, finches' beaks changed shape based on what kinds of foods were most available in their specific breeding grounds. Finches living in areas where seeds were plentiful had strong beaks for breaking seeds open. Where nectar was more readily available, finches had narrow beaks for reaching into flowers.
After years of tooling his Galápagos observations, Darwin was able to riddle out the mysteries of natural selection. It could be argued that these islands are the reason that Darwin's face was once featured on British currency. In fact, the naturalist was so smitten with the islands that he took a piece of them back to England with him, in the form of three giant tortoises—a move that would be extremely illegal today. One of the tortoises, named Harriet, lived to be a whopping 179 years old. Her final owner? None other than famous conservationist Steve Irwin!
Since 1959, 97% of the Galápagos Islands, or around 3,000 square miles, has been designated as Galápagos National Park. The Galápagos Marine Reserve also protects 50,000 square miles of local ocean waters. The measures couldn't have come soon enough: since Darwin discovered the islands, some species, such as the giant tortoise, have been pushed beyond or to the point of extinction by poachers. And today, some 25,000 people now reside on the habitable islands of San Cristobal, Isabela, Floreana, and Santa Cruz. Here's hoping conservationists keep up their efforts. That way, these islands can continue to thrive and produce even stranger wildlife for years to come!
Image credit & copyright: DC_Columbia/Getty Images