No thanks
Continue
Whoops!
Your free trial of Curious+ has expired
Person, Place, or Thing
Our encyclopedia of the odd and awe-inspiring.
Previous Next
June 16, 2019
1 CQ
Thing: Wars of the Roses 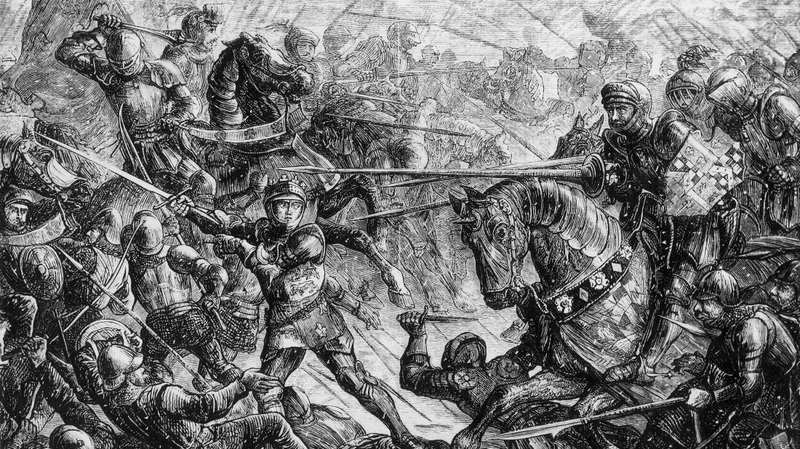 Two houses strive violently for the English throne.
Unfortunately for the Yorks and Lancasters, blood ran red and strong in the family. From May 22, 1455, to June 16, 1487, these two arms of the English royal family failed to resolve their differences to claim a unified monarchy. So they duked it out in a series of conflicts now known as the Wars of the Roses, a reference to the badges each house wore on their apparel: the white rose of York and the red rose of Lancaster.
The Wars of the Roses begins with feckless King Henry VI. His wife Queen Margaret of Anjou ruled in his stead as mental illness frequently left him unfit to govern. After years of Margaret's controversial rulership, Richard, third Duke of York, and his chief lieutenant Richard Neville, the Earl of Warwick, assembled a small army and assaulted London to oust Margaret. After a minor clash at St. Albans in 1455, the duke and earl snatched up a catatonic Henry VI, with York proclaiming himself the king's Lord Protector. He enjoyed the role for a year until Henry VI awoke from his stupor one day and returned Margaret to power. York was banished to Ireland but returned to England shortly after with a vengeance.
At the Battle of Northampton, York once again won the game of capture the king and became Henry VI's successor in 1460. Margaret retreated to Scotland and amassed a Lancastrian counterattack to reinstate her son, Edward of Westminster, as the rightful heir. She and the Lancaster forces slew York at the Battle of Wakefield in 1460, and a phony crown was placed upon his severed head in mockery as the countryside was pillaged.
But total victory eluded Margaret, as Londoners denied her rabble entry to the capital. She retreated north again while the Earl of Warwick aligned himself with York's son and heir, Edward, who he then coronated King Edward IV. Together, they defeated Margaret and sent her back into exile. But Edward IV and Warwick's promising bromance soured when the former married Elizabeth Woodville against the latter's wishes in 1464. They met in battle at Edgecote in 1469, with Warwick achieving victory. The two made amends shortly after, but Edward IV, carrying a grudge, declared Warwick a traitor a year later and chased him off.
Then something miraculous happened. Enemies of enemies became friends when Margaret and Warwick squashed their beef and teamed up against Edward IV. They raised yet another army under the Lancastrian banner and invaded England, managing to restore mad King Henry VI again. In response, Edward IV rallied the Yorkists and clashed with Warwick, this time at Barnet, where his old ally met death. Taking no chances with his antagonists, Edward IV then proceeded to kill Edward of Westminster (Margaret's son) at Tewkesbury and had mad Henry VI murdered shortly after. Edward IV, himself, died not long after his blood spree came to a close in 1483. In a karmic twist, his brother, Richard of Gloucester, had Edward IV's sons put to death before declaring himself King Richard III.
Naturally, Richard III's acts of nepoticide put him in poor standing. Months later, the Duke of Buckingham revolted in favor of crowning Lancastrian heir Henry Tudor. Richard III and Henry Tudor met in battle Bosworth Field, where the former was killed. The latter, crowned Henry VII the same day, decided it was high time to resolve the psychotic York-vs-Lancaster feud. He married leading Yorkist heir Elizabeth of York in 1486, and combined the badges of both houses to create a white rose with red trim dubbed the "Tudor Rose." It was an unnecessary act of amity. By that point, the male lines for both families had been bled dry!
Image credit & copyright: Hulton Archive / Getty Images