No thanks
Continue
Whoops!
Your free trial of Curious+ has expired
Person, Place, or Thing
Our encyclopedia of the odd and awe-inspiring.
Previous Next
June 9, 2019
1 CQ
Person: Secretariat 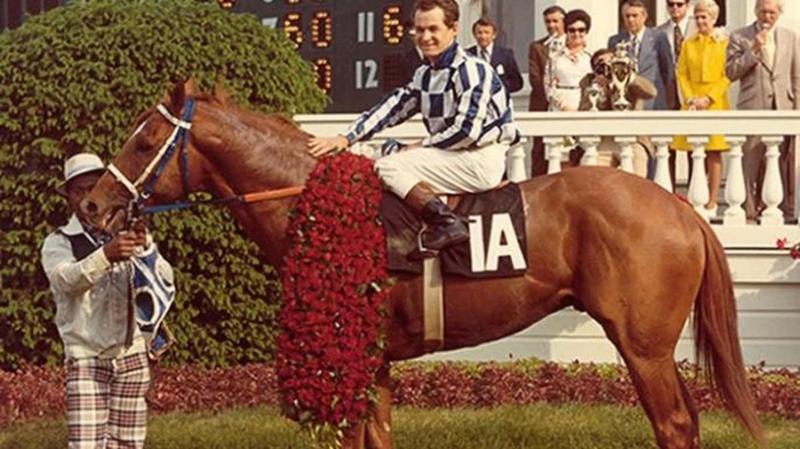 The "Horse of the Century" wins the Triple Crown.
The most talented racing horse of all time, Secretariat was never one to champ at the bit before a race. Today marks the 46th anniversary of the thoroughbred's win at the Belmont Stakes, where he took his place as a Triple Crown-winner. Taking a look back at Secretariat's history shows he wasn't just a lucky horse, but a prime athlete destined for greatness—even if he was a tad laid-back.
On March 30, 1970, at Meadow Stables in Doswell, Virginia, a red-chestnut colt was born with three white "socks" above its hooves, and a thin blaze running down the middle of its face. The parents were two prize horses as well: a sire named Bold Ruler, an American Champion Sprinter, and his broodmare Somethingroyal, who brought stamina into her colt's genetic pool. Their foal received its name that fall: Secretariat, as a nod to the executive arm of the League of Nations, the predecessor to the United Nations.
As he matured, Secretariat became known at Meadow Stables as "Big Red." By two, he had grown to the size of a three-year-old horse (about 16 ¾ hands high, or 64.75 inches), and was a standout among his stablemates. In 1972, he joined Lucien Laurin's training stable at Hialeah, Florida. His exercise rider observed "[Secretariat] wasn't in a hurry to do nothin'.... The quality was there, but he didn't show it until he wanted to." With training and blinders to keep his focus on the track, Big Red came in fourth at his first race in July of 1972 at Aqueduct Racetrack in New York City. It was the first and only time Secretariat placed outside of the top three during his racing career.
In the following year, Secretariat became known for his slow starts and strong finishes in races. With his new jockey Ron Turcotte in the blue-and-white Meadow Stables jersey, Big Red was ready to take on the Triple Crown: the Kentucky Derby, the Preakness Stakes, and the Belmont Stakes. At the record-attended 1973 Kentucky Derby, the start of the race saw three horses get into an accident in the stalls, with one of them, Sham, ending up neck-and-neck with Secretariat at the end of the race; but Big Red won by 2 ½ lengths (about 20 feet). At the second of the Triple Crown races in Pimlico Race Course in Baltimore, Maryland, the official teletimers malfunctioned during the Preakness Stakes, putting Secretariat's official record-breaking time into question at around 1:53 or 1:54 minutes.
By the time of the Belmont Stakes in Elmont, New York, Secretariat had also become a national phenomenon, appearing on the covers of Time, Newsweek, and Sports Illustrated. With only four other horses running in the Belmont Stakes, and nearly 70,000 attendees, the stakes couldn't have been higher on June 9, 1973. In the beginning, Sham once again gave Secretariat a run for his money, with both racers completing the sections in record time. From there on, Sham tired, and Secretariat went into overdrive—according to Turcotte's account, Secretariat wasn't keen on following his jockey's plan of staying behind and catching up in the end: "I never felt such strength under me as I did that day." Secretariat finished in 2:24 minutes with 31 lengths (248 feet) between him and the next horse. He was the first horse in 25 years to win the Triple Crown, beating the Belmont Stakes race in record time.
Months shy of turning four years old, Secretariat retired with 16 first-place wins out of 21 races. As a pastured stud, his 663 foals included 341 horse racing winners. When he passed away in 1989, veterinarians at the University of Kentucky stood in stunned silence upon viewing his heart, which weighed 22 pounds and was twice the size of a normal horse's coronary organ. It was the great source of his strength, his character, and his unparalleled drive to win.
Below: video of Secretariat's win at the Belmont Stakes in 1973.