No thanks
Continue
Whoops!
Your free trial of Curious+ has expired
Person, Place, or Thing
Our encyclopedia of the odd and awe-inspiring.
Previous Next
May 5, 2019
1 CQ
Person: Nellie Bly 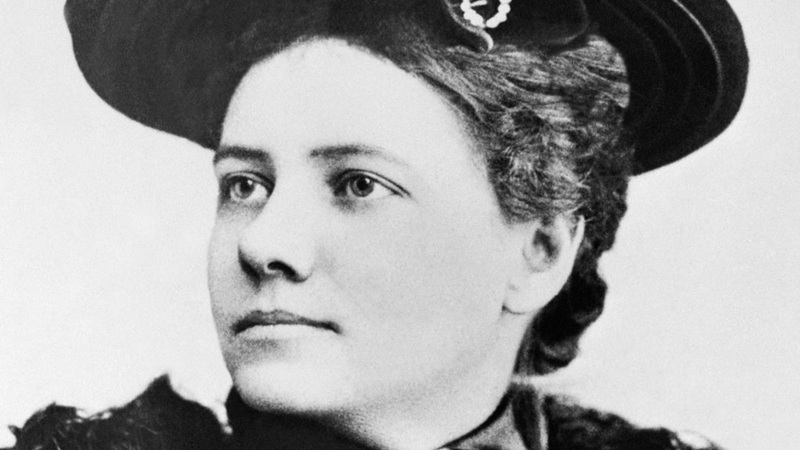 An intrepid reporter goes undercover to expose a notorious insane asylum.
Strap on your tinfoil hats and arm your notepads—we're plunging into the madhouse with Nellie Bly! The fearless American reporter, born May 5, 1864, redefined the civic responsibilities and potential of journalism. In the span of just two weeks, Bly saved hundreds from inhumane torture and opened the door for reforms in a long-troubled branch of the medical industry. And this was all before she circled the globe in record-breaking time!
Bly was born Elizabeth Cochran in Cochrans Mills, Philadelphia. Her journalism career began at 21, when she wrote a response to a misogynistic article published in The Pittsburgh Dispatch. Staffers at the Dispatch were so impressed with the scathing rebuttal that they hired her on. She adopted the pen name Nellie Bly from a song by composer Stephen Foster and took a job covering dictator Porfirio Díaz in Mexico. The experience landed her a gig at Joseph Pulitzer's hard-hitting, investigative newspaper, the New York World.
By 23, Bly had become one of the few female reporters in New York City and was itching to make her mark. Her target? The notorious Blackwell's Island Madhouse. Rumors circulated of severe medical mistreatment at the facility, and Bly was determined to dig up the truth. She assumed an alias, tangled and knotted her hair, and took a room at a boarding house where she feigned insanity. After a few days of ranting and raving, the proprietors of the boarding house called the police. Bly was diagnosed with dementia and other illnesses at Bellevue Hospital before she was ferried to Blackwell's Island and committed in the fall of 1887.
Conditions at Blackwell were far worse than the speculation of rumors. Bly was crammed alongside 1,600 patients into the building, which was built to hold 1,000. Just 16 doctors were on staff and their treatment of the ill was deeply disturbing. They showed little compassion and mutilated patients on a day-to-day basis, exacerbating their illnesses. Patients were drenched in ice-cold water and forced to sit absolutely still for 12 hours at a time. Some staffers even threatened Bly with sexual violence. Perhaps worst of all, many of the patients at Blackwell were not insane to begin with. They were immigrants, women for the most part, who had landed there by virtue of language barriers.
A week-and-a-half later, Bly's editors arranged for her release. Her series of articles, Ten Days in a Mad House, were published shortly after. Blackwell had been tipped off and managed to clean up its act, but after the ensuing trial, the institution's malevolent staffers were fired and replaced. Sane patients were released and afforded translators when necessary. Furthermore, Bly's sleuthing resulted in the passing of numerous reforms, including an unprecedented budget increase for mental institutions of nearly $1 million (or $24 million adjusted for inflation).
By 1889, 25-year-old Bly was a celebrated heroine—and soon to be a renowned adventurer. One day, after reading Jules Verne's adventure novel Around the World in Eighty Days, she was inspired to attempt the titular feat. Her editor argued that only a man could accomplish it. Bly responded, "Hire a man and I'll start the same day for another newspaper and beat him." She was approved. Bly set out from New York in a westerly direction and managed the trip in a record-breaking 72 days, later publishing her story in a book.
Upon her return, Bly was the most famous reporter of her age. She continued to cover stories here and there, like the women's suffrage convention, but married a Brooklyn millionaire and industrialist and preoccupied herself with charity work. Her husband died a few years later, and she took over his business and even patented a few oil manufacturing inventions before her death on January 27, 1922. Today, Bly is revered as a larger-than-life figure, a fashion icon, a feminist dynamo, and a key pioneer in investigative journalism. Simply put, Bly is a legend.
Image credit & copyright: Getty Images