No thanks
Continue
Whoops!
Your free trial of Curious+ has expired
Person, Place, or Thing
Our encyclopedia of the odd and awe-inspiring.
Previous Next
April 21, 2019
1 CQ
Thing: Legend of Romulus and Remus 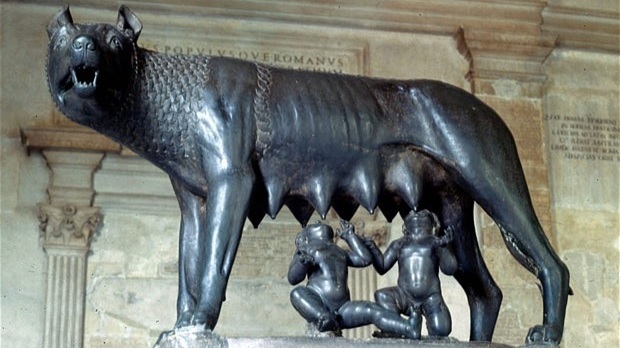 A twinning bromance ends in the violent birth of Rome.
Nothing to see here but a lighthearted sibling rivalry. According to ancient Roman tradition, mythological twins Romulus and Remus founded Rome on today's date in 753 B.C.E. as the culmination of an epic family feud started by their twisted great-uncle. Their legend, which originated in the third or fourth century B.C.E., was once taken as fact, and with so many theatrical ups and downs, it's easy to see why the story jibed with the masses. Even if it stretches the truth… just a smidge.
The legend of Romulus and Remus begins with their grandfather, King Numitor, who ruled the ancient Latin city of Alba Longa until he was usurped by his brother, Amulius. Amulius forced Numitor's daughter Rhea Silvia to take a sacred vow of chastity, to ensure that none of Numitor's progeny could seek revenge. She was sealed within a convent, but the wily god of war Mars impregnated her.
When Amulius caught wind that Rhea had given birth to twins, he ordered their death, and the two babies were left to perish on the shores of the Tiber River. But a generous she-wolf came across the twins and nursed them. Eventually, a shepherd named Faustulus encountered the feral children, too, and raised them as his own. Romulus and Remus matured with no knowledge of their origins, though their godly blood made them just, charismatic leaders in their village community.
By this time, King Amulius was loathed by his citizens. When Romulus and Remus involved themselves in a local dispute between rival supporters of Numitor and Amulius, Remus was imprisoned and whisked away to Alba Longa. There, both Numitor and Amulius suspected Remus' true identity. Romulus, meanwhile, gathered a mob of supporters to rescue his brother. During the ensuing quarrel, fiendish uncle Amulius died. Numitor revealed to the twins that he was their grandfather, and was then reinstated as king of Alba Longa.
The boys were delighted to have all that nasty business behind them. They set out from Alba Longa to establish a new kingdom. Only, they couldn't agree on a location for it. Romulus argued that Palatine Hill was the perfect site. No way, scoffed Remus; it was definitely Aventine Hill. To settle their dispute, they consulted augury, or the practice of interpreting omens from the flight of birds. When Romulus saw more auspicious birds than Remus, the latter flew into a rage. In an act of anger and mockery, Remus leaped over a meager wall that Romulus had been building on his hill of choice. Fed-up Romulus, in turn, slew Remus for his contempt. So Palatine Hill, it was.
After gloating over his senseless act of fratricide, Romulus went on to found Rome. Well, not really. According to modern dating of ancient Roman walls and pottery, some of the artifacts and structures of Rome actually predate the legend of Romulus and Remus by 100 years. Sure, the tale's happenings could have transpired further back in time, but we're not betting on it. After all, who in their right mind would choose to live under the king of a hill, no less one who gutted his brother?
Image credit & copyright: Alamy


More about this Curio:
The New York Times: "More Clues in the Legend (or Is It Fact?) of Romulus"
Smithsonian: "Ancient Walls Show That Rome Is Older Than Legend"
History: "Rome founded"
ThoughtCo.: "The Founding of Rome"